What is Manual Testing

Roles and Responsibilities of a Manual Tester

Manual testing is a process of software testing in which we execute the test cases manually without using any automated testing tool. From the end user’s perspective, testers will execute the test cases manually. It tests whether the application is functioning as illustrated in the requirement document or not. It is one of the critical testing processes as it can detect both hidden and visible bugs of the software. The difference between the actual output and the expected output is called a bug.

Manual testing software is compulsory for every recently built software before automation testing. Manual testing requires great time and effort, yet it gives a guarantee of bug-free software. So, to build a good career in Software testing you must learn Manual testing.

What is Manual Testing?

Whenever a software application is released into the market, it may have some issues or bugs, or end-users may face some problems while using it. So, we have to perform one testing stage to make the application stable and bug-free and deliver a quality software product to users. While performing the manual testing, the test engineer tests the software from the customer’s perspective to develop the appropriate test cases and give proper feedback to the developers.

We have two types of testing methods, they are:

Static Testing is also known as Verification. It is a method of verifying files and documents. It ensures that we are developing the correct product. It also verifies the requirements we have. In this method, test engineers will carry out activities like Reviews, Inspections, Walkthroughs, etc.

Dynamic Testing is also called Validation. It is a dynamic process of testing the software product. It validates whether the developed product is right or not.

How to do Manual Testing?

Step1: First, review all the documents related to the software, for selecting the testing areas.

Step3: Build test cases as per the requirement document.

Step5: If bugs are detected, report them to the development team.

Step6: When the developer fixes the bug, retest it.

Roles and Responsibilities of a Manual Tester

Following are the roles and responsibilities of a Manual Tester:

Software Development Life Cycle(SDLC) is a mechanism that is followed in software projects for systematically developing a software product and delivering a good product. It intends to create a high-quality product that satisfies or surpasses the customer expectations, works efficiently and effectively in the planned and current IT infrastructure, and is economical to cost-efficient and maintain for enhancement. In Software Development Life Cycle, we will have the following phases: 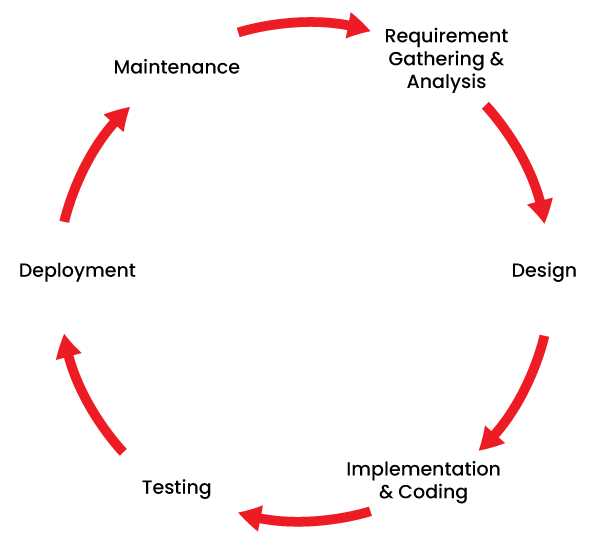 After requirement analysis and gathering is completed, the next phase will be defining and documenting the product requirements and getting approval from the customers.

The design phase has two steps, they are:

Developers of all levels(Freshers, Juniors, and Seniors) are actively involved in this phase. In this phase, we will start developing the product and begin writing the code for the software. Source Code Document(SCD) and the product is the output of this phase.

After completing the software development, developers will send the product to the testing team. They will test it thoroughly to identify the defects. They either test the software manually or use automated testing tools. It ensures that every element of the software works properly.

After completing the testing, we will deploy and deliver the product to our customers. Implementation/Deployment engineers will deploy the product. When the customers begin using the software product, then real problems will arise and have to be resolved from time to time.

The waterfall model is a conventional software development model. It follows a sequential design process, in which the development is viewed as streamlined downwards like a waterfall, through different steps like requirement gathering, Feasibility Analysis/Study, designing, coding, testing, deployment, and maintenance. Every next phase starts only after the objective of the previous phase is completed. This model is better for short-term software projects where quality is more important than the schedule or cost.

The V-model is also called the Verification & Validation model. In this model, every phase of the SDLC model should be completed before the next phase begins. It also follows the sequential design process similar to the waterfall model.

The Agile Scrum methodology is a popular agile software development method. It is a blend of both iterative and incremental models for handling product development.

It is one of the most commonly used SDLC models. In this model, a prototype model is built before the actual product. Generally, the software development team will use this model when end users don’t know the requirements in advance.

STLC(Software Testing Life Cycle) is a process that identifies which test activities to perform and when to execute those test activities. Even though testing varies between organizations, there is a testing life cycle. Following are the different phases of STLC:

It is the first phase of the software testing process. Generally, in this phase, the test lead/test manager involves evaluating the efforts and budget projections of the complete project. According to the requirement analysis, the test preparation is done. In this phase, activities like tools selection, resource planning, deciding roles and responsibilities, and training news are performed.

According to the planned test cases, the testing team begins executing the test cases. After determining the test case result, it must be updated in test cases. The defect report should be developed for the failed test cases and submitted to the development team with a bug-tracking tool to fix the defects. After fixing the defect, retesting will be performed.

The final stage of the Software Testing Life Cycle(STLC) is Test Closure. In this stage, we will prepare the Test Metrics and Test Closure Report. The testing team will meet to assess the cycle completion criteria according to the Test coverage, cost, quality, business objectives, and software. The testing team analyzes the test artifacts for identifying the strategies that must be implemented in the future. 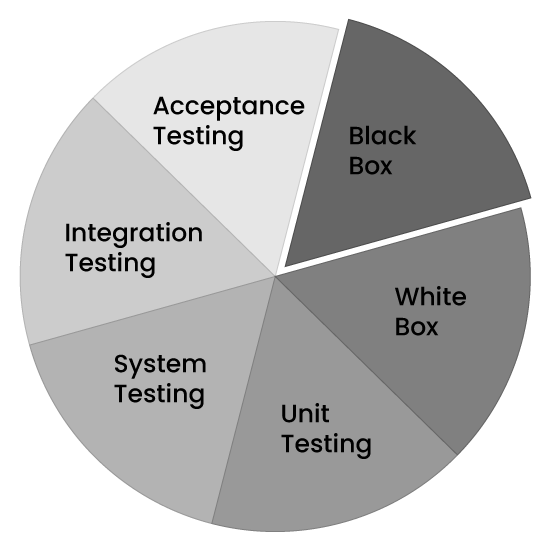 The following are the types of manual testing:

It is also known as Clear box, Structural, and Glass box testing. In this type of testing, testers will use the system’s internal perspective and programming skills to design the test cases. Generally, this testing is performed at the unit level.

In black-box testing, testers assess the functionality of the software application without considering the internal code structure. Black box testing can be applied to all levels of testing like Integration, Unit, Acceptance, and System testing.

Unit testing is also known as Component testing or Module Testing. It is carried out to verify whether a particular module or unit of the code is working properly. It is performed by the developers in their environment.

System testing is a process of testing the completely integrated application for assessing the system’s comfortability with its defined requirements known as System testing or End to End testing. It verifies the entire system to ensure that the application works as planned or not.

It is one of the leading companies handling tracking program issues. Due to its comfortable framework and personalizable features, Jira is good as a management tool. Working on Java is simple, yet at the same time complex, according to the user and type of operation.

Trello is popular for its comfortable project management and efficient tracking of issues. Testers have the liberty of creating the problems available with a convenient-to-use setup that can be further developed through some complex automation rules.

Zephyr antique spreadsheets, most accurately when integrated with Jira. It improves the visibility of the test results by providing a well-organized layout plan, ideal for most build types.

It is not only comprehensive, but also it is one of the tools that emphasize a clean background demonstrated intuitive for the users. It provides constant cross-browser testing throughout a wide variety of devices and browsers. The distinct feature is feedback loop integration, which allows rapid and efficient exchanges across the development cycle.

This testing kit is famous and preferred for its rapid loading of live applications to real-world browsers, which preserves real-time. Even though the pages are not entirely operative, they will show the critical and required functions.

It is an essential and widely used bug-tracking tool. It tracks the bugs and prepares the bug report. We can also use it as a test management tool. We can easily connect it with other test case management tools like quality center, ALM, etc.

The MantisBT refers to the “Mantis Bug Tracker”. It is an online-based bug-tracking system, and it is also a freeware tool. It follows the software bugs and is implemented in the PHP programming language.

What is a Bug?

What is the Bug Life Cycle?

Following are the different states of the Bug life cycle: 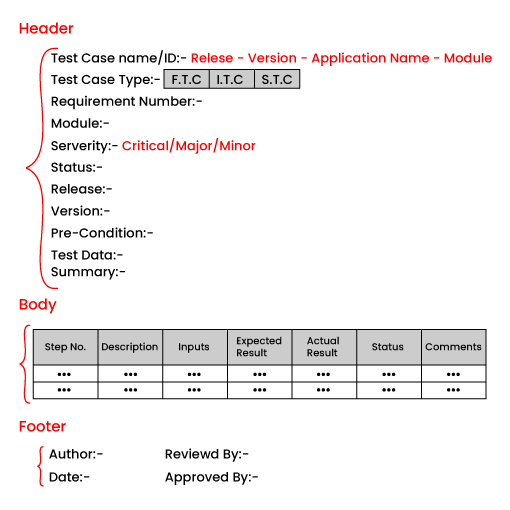 The test case is a set of conditions under which a tester evaluates whether the software application gives the desired results. Test case development involves case names, pre-conditions, expected results, and input conditions. A test case is the first stage of action and originated from the test scenarios. It is an in-detail document that provides detailed information about the testing process, testing strategy, expected output, and pre-conditions.

Testers execute them in the testing process for checking whether the application is doing the work for which it was built or not. It also helps the tester in bug reporting by connecting the bug with the test case ID. The test case documentation serves as absolute proof for the testing team because if the developer misses something, then we can catch it during the execution of these test cases.

When do we develop a test case?

We will develop the test cases when we get the below:

Why do we develop the test cases?

We build the test cases due to the following reasons:

Following are the fields of the test case development:

What is API Testing?

API testing is a software testing type that tests Application Programming Interfaces(APIs). The main objective of API testing is to verify the functionality, security, performance, and reliability of programming interfaces. By using both manual testing and automation testing, we can do API testing. In the API testing, rather than using the conventional user inputs and outputs, we use software tools for sending the calls to API and getting output.

API Testing is an important task that the testers must emphasize. It provides various advantages over other types of testing. The following are the advantages of API testing:

The following are the types of API testing:

For successfully doing API testing, we require a tool for structuring and handling our test cases. Following are some of the most widely-used API testing tools:

How do we perform API Testing? 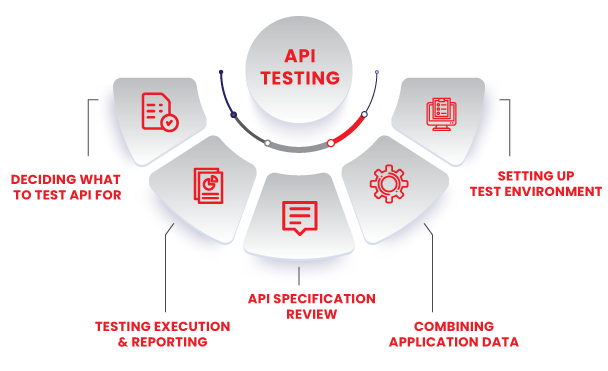 By following the below steps we can perform the API testing:

The second of API testing is establishing the test environment, with the essential group of parameters about the API. This includes configuring the server and database for application requirements.

In this phase, we have to merge our application data with the API tests to assure that the API works as anticipated.

#4. Determining the kind of API Testing:

After creating the testing requirements and boundaries, we have to determine what we have to test our API for. We have different kinds of API testing like validation testing, functionality testing, security testing, load testing, and end-to-end testing.