Before appearing for the Redux interview, it's always helpful to prepare by referring to the latest Redux interview questions. In this post, go through all the questions you might encounter in the interview. Have a read ahead!

Developed back in 2015 by Dan Abramov and Andrew Clark, Redux is an open-source library that has been designed with the help of JavaScript. The primary use of Redux is to manage and centralise the states of applications. However, it is generally used with JavaScript libraries, such as Angular or React, to build User Interfaces (UIs).

Being an attractive stream, Redux charms a lot of people. So, if you're ready to curate your career in this domain, refer to these Redux interview questions to prepare well and get the job you deserve.

We created the Redux Interview questions and answers blog into two stages, they are:

Redux is an open-source library written in the JavaScript scripting language. Redux's primary purpose is to manage and centralise the application state, and it's generally used in conjunction with JavaScript libraries like React or Angular to create user interfaces (User Interfaces). It's a state container that's predictable for JavaScript apps. Redux is a lightweight application (about 2 kilobytes) with no dependencies.

Like the Model View Controller design pattern, Flux is an application design paradigm. Flux is a new type of architecture that works in tandem with React and the idea of Unidirectional Data Flow.

3. What is Redux in ReactJS?

The official React binding for Redux is Redux in React, which allows React components to read data from a Redux Store and dispatch Actions to the Store to update the data. The goal of Redux is to make it easier for apps to scale by providing a way to manage the state using a unidirectional data flow architecture.

5. What are the advantages of using Redux?

The following are some of the advantages of using Redux:

6. Is it true that Redux is only compatible with React?

No, Redux does not have to be used in conjunction with React. For many UI layers, Redux is used as a data store. Redux has bindings for React, Angular, Angular 2, Vue, and more frameworks.

Redux Toolkit is Redux's official, opinionated, and battery-powered development toolkit. It also includes the most popular Redux add-ons, such as Redux Thunk for asynchronous logic, Reselect for building selector functions, and many others, making development easier and saving developers time.

8. What are some of Redux DevTools' most essential features?

9. Is keeping all of the component states in the Redux store necessary?

All component states do not need to be kept in the Redux store. We need to keep your application state as little as possible. Thus, we should only do it if it makes a difference to us or if it makes using Dev Tools easier.

10. In what situations may we use Redux?

11. What are Redux constants?

When using an Integrated Development Environment, constants in Redux assist us in quickly locating all instances of a specific functionality across our whole project (IDE). We may avoid ridiculous issues caused by typing errors or typos by using constants, which display a "ReferenceError" anytime a typo is made.

12. What is the mental model of redux-saga?

In Redux, the "Store" holds all the states, reducers, and actions that make up the app. The following are some of the Store's responsibilities:

The Redux Store keeps track of the current application's state from within.

We can write action creators that return a function instead of an action using Redux Thunk middleware. This thunk can delay an action's dispatch or perform conditional dispatch. The storage methods dispatch and getState are supplied as parameters to the internal procedure (). When an action creator returns a function, the Redux Thunk middleware executes the function, which does not have to be pure.

In other words, the function is allowed to have side effects, such as making asynchronous API calls. It's even capable of dispatching activities. The Redux thunk is used to postpone the dispatch of action or to dispatch if a given condition is fulfilled. If Redux Thunk middleware is enabled, when a function rather than an action object is sent, the middleware will call that function using the dispatch method as the first argument.

15. What are Redux's workflow features?

1. What are Redux forms, and how do you use them? What are the main characteristics?

Redux Forms, which are available in both React and Redux, allow a form in React to use Redux to store all of its states. In HTML5, we can utilise them with raw inputs. Redux forms are compatible with various UI frameworks, including Material UI, React Widgets, React Bootstrap, etc.

The following are the main characteristics of Redux forms:

2. In Redux, how can we structure the top-level directories?

There are numerous top-level directories in every Redux application, as seen below: 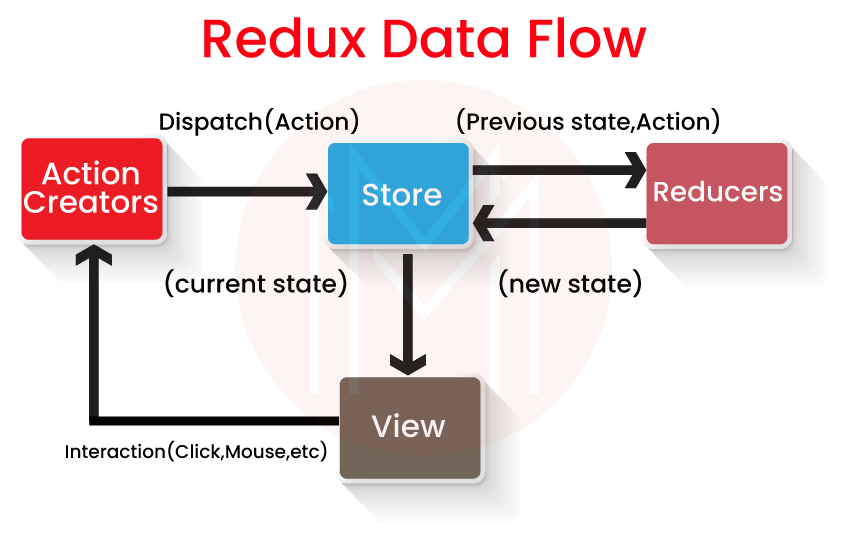 Redux Saga is a middleware framework that allows a Redux store to communicate with external resources asynchronously, such as making HTTP calls to external services, accessing browser storage, and performing Input/Output operations, among other things. These procedures are also known as side effects.

4. Are there any things we should never do inside a reducer?

We should never do the following things inside a reducer:

5. What is the distinction between React redux and React context?

Context may be used directly in your application and is ideal for passing data down to deeply nested components, precisely what it was meant for. On the other hand, Redux is far more powerful and has many features that the Context API does not.

React Redux also uses context internally, but this isn't disclosed in the public API. As a result, you should feel much more comfortable using context via React Redux rather than directly since if it changes, the duty for changing the code will fall on React-Redux rather than the developer.

6. Are there similarities between Redux and RxJS?

Although there are a few overlapping themes, these libraries are highly varied and serve very different goals.

Redux is a state management framework for web applications. It is commonly used as a UI architecture. Consider it a compliment to (half of) Angular.

RxJS is a library for reactive programming. It's most commonly used in JavaScript to complete asynchronous activities. Consider it a substitute for Promises.

7. What's the Difference Between MVC and Flux?

The data, display, and logical layers are nicely separated and managed in the MVC structure. Even a minor update to an application can result in numerous changes throughout the application. It occurs because, in the context of MVC, data flow is bidirectional. MVC structure maintenance isn't complex, but Debugging does require a lot of skill.

Flux and redux are inextricably linked. A story-based technique captures changes made to the application state, event subscription, and current state, all of which are linked via components. Redux is used to transmit call back payloads.

8. What are the concepts of functional programming?

Redux is structured using various functional programming techniques, which are described below.

9. How do you know if the Redux state has changed?

A change in state to an application is applied for a release of action; this ensures that the intent to modify the state is achieved.

10. What is the typical data flow in a React and Redux app?

The typical data flow starts with a callback from the UI component that triggers the dispatch of action with a payload intercepted and received by the reducers. A new application state will be created as a result of this interception. The actions will then be transmitted down through a hierarchy of Redux store components. 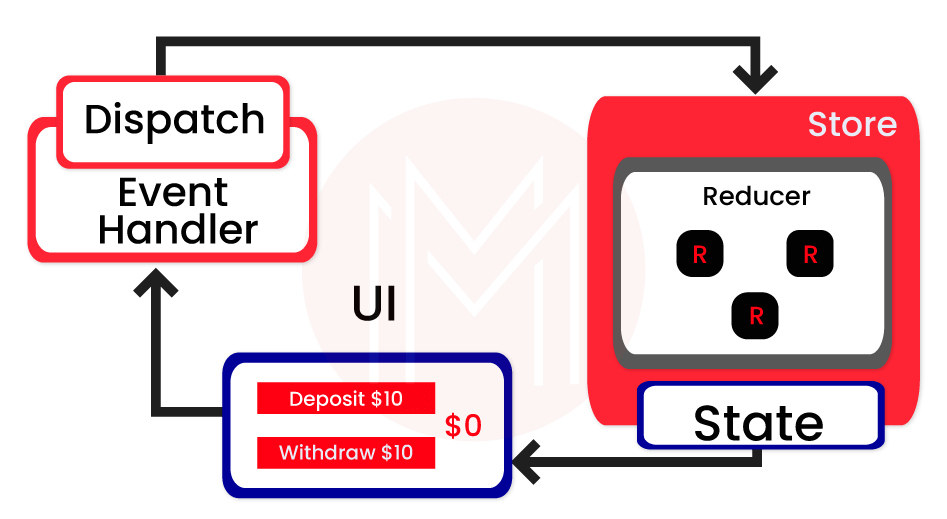 It's a memory-based depiction of Real DOM. The representation of a user interface is stored in memory and synchronised with the "actual" DOM. It's the rate at which the render function is called, and the fundamentals are displayed on the screen.

12. What is the difference between state and props?

Props and states are both fundamental JavaScript objects. While they both comprehend information that affects the cause's output, their functioning with the constituent, i.e., the element's status, is maintained in the same way as variables are confirmed within a purpose.

The constituency accepts props in the same way that utility parameters are approved.

13. What are ReactJs' limitations?

The following are some of the ReactJS drawbacks:

14. In a React app, why would you use force update?

React does not identify if there is a form that requires a UI change to power a re-render.

A controlled component is powered by React and serves as the single source of truth for form data.

Your form data is handled by the DOM rather than your React component in an uncontrolled component.