What is Multivariate Data Analysis

What is multivariate data?

A variate is a weighted combination of variables. Multivariate, bivariate, or univariate are used to refer to a classification of data on the basis of the number of variables. The variables are actually the number of objects that are considered as samples in any experiment. The data sets can be of three different types.

Multivariate analysis is based on multivariate statistics. This type of analysis involves the observation of more than a single statistical outcome at a time. This technique comes into use for performing trade studies across multiple designs in design and analysis. The effects of all variables would be taken into account on the responses of interest.

High-speed computers are now available and so are multivariate software. This means, such questions can be answered by many people today through multivariate techniques that weren't accessible to most formerly. An increased interest can also be seen in the recent quasi-experimental and observational research methods.

It is often argued that multivariate analyses like multiple regression and ANCOVA can be used for providing statistical control of the extraneous variables. Multivariate analysis is quite varied and there can be variety of ways to go within one general type. This means two analyzers can reach different conclusions easily while independently analyzing the same data.

Getting a computer to do multivariate analysis is relatively easy to learn. However, it might not be so easy to correctly interpret the output of multivariate software packages. While the conceptual world is three-dimensional and many are just comfortable with the two-dimensional space, multivariate statistics can take us into hyperspace, which is much different from where our cognitive faculties had evolved. 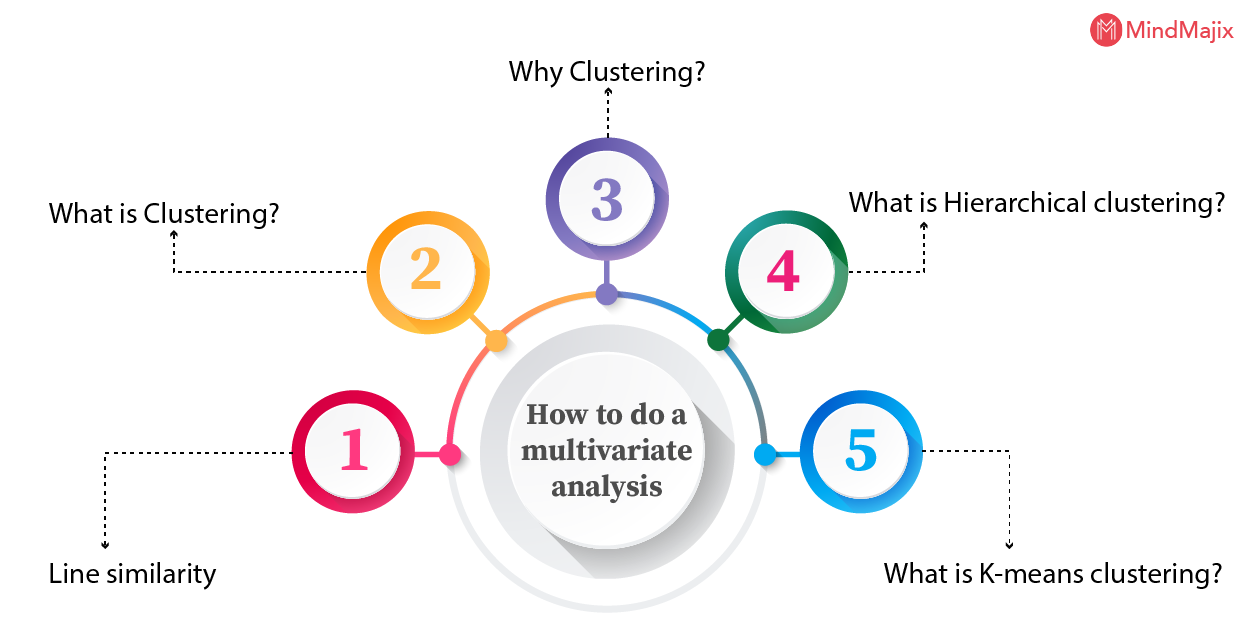 How to do a multivariate analysis?

Multivariate analysis can be performed in different ways with the available statistical tools at disposal. The tool to be used often depends on the data available. It is important to understand the appropriate uses of each technique. The purpose of the analysis is to find the best combination of the weights. Before the analysis technique is started, a clear understanding of the form and quality of data is quite essential.

These are some of the ways multivariate analysis can be performed.

1. What is Line Similarity?

The line most similar to the master line would receive the rank 1. Euclidean distance or correlation would be used to measure the distances. The empty values are generally replaced using row interpolation and are similar to something in the visualisation. The rows can also be excluded if necessary while performing calculations.

One thing that you need to keep in mind is that the Line Similarity tool cannot be used unless a suitable line chart has been created on which the calculation can be based upon. Multiple Y-axes cannot be put on an X-axis if it is both continuous and binned when a line similarity comparison is being performed.

Clustering involves grouping a particular set of objects based on the characteristics and aggregating them based on the similarities. The methodology would partition the data depending on a join algorithm and is highly suited for the analysis of the desired information. This type of clustering analysis would allow the object to not be a part of a cluster or belong to it strictly, and is known as hard partitioning.

The soft partitioning requires every object to belong to a cluster in a determined degree. There could even be more specific divisions where the objects can belong to multiple clusters. An object can be forced to participate in one cluster, group relationships, or hierarchical trees.

The partitioning can be implemented in several different ways based on the distinct models. Distinct algorithms are applied to each model and the results and properties are differentiated. The models are distinguished by the relationship and organization between them. Some of the important clustering types are:

Different clustering algorithms exist in data mining. There is a lot that can be applied to a data set based on these cluster models. It is important to note that every method has its pros and cons. The choice of an algorithm would always depend on the characteristics of the data set and what we need to do with that.

Clustering is actually a very valuable data analysis technique. There are several different applications in the world of sciences. Every data set of information that is large can be processed through this type of analysis. The produced results would be great and have many distinct types of data. It can be said that one of the most important applications is related to image processing and detecting distinct patterns in image data. It would be very effective in biological researches and distinguishing objects and identifying patterns. Another use would be the classification of medical exams.

Personal data in shopping, location, actions, interest, and a lot of other indicators can be combined for analysis with this methodology to offer very good insight and trends. Examples include market research, web analytics, market strategies, and others. Other applications that are based on clustering algorithms include robotics, recommender systems, climatology, statistical and mathematical analysis. It offers a broad spectrum of utilization.

4. What is K-means Clustering?

K-means clustering is a type of supervised learning and is used when unlabeled data is present, i.e. data does not have defined groups or categories. The goal of the algorithm is used to find groups in the data with the number of groups that represent the variable K. The algorithm performs iteratively and assigns each of the data points to the suitable K group based on the provided features. Feature similarity is the basis on which the data points are clustered. The results include:

Instead of defining the groups before you look at the data, you would be allowed to find and analyze the groups that have formed organically. The number of groups can also be determined. Each centroid of the cluster is a collection of features which would define the resulting groups. The examining centroid feature weights can be used to qualitatively interpret what kind of group each cluster would be representing.

The K-means clustering algorithm would be employed when the aim is to find groups which have not been labelled in the data explicitly. It can be used for the confirmation of business assumptions about the types of groups that exist and to identify the unknown groups in the complex data sets. New data can be easily assigned to the correct group once the algorithm has been run and the groups have been identified.

It is guaranteed that this algorithm would converge to a result. However, the result might be a local optimum and not necessarily the best possible outcome. More than a single run of the algorithm with randomized starting centroids might be a better outcome.  The algorithm would find the clusters and the data set labels for a particular K, the value of which must have been chosen earlier.

The user would need to run the K-means clustering algorithm for a range of K values to find the number of clusters in the data and then the results are to be compared. There is no exact method for determining the exact value of K but an accurate estimate can be obtained.

The mean distance between the data points and the cluster centroid is used for comparing the results across different values of K. As the number of clusters would always be reducing the distance to data points, increasing the value of K would be decreasing the metric to 0, which happens when K equals the number of data points. The mean distance to the centroid is plotted as a function of K and the 'elbow point' where there is a sharp shift in the rate of decrease is used for roughly determining K.

There are some other techniques as well for validating K like information criteria, cross-validation, the information theoretic jump method, the G-means algorithm, and the silhouette method.

5. What is Hierarchical Clustering?

Hierarchical clustering starts with the treatment of each observation as a separate cluster. Following that, two clusters that are the closest are identified, and then the two most similar clusters are merged. This process is continued until all the clusters are merged together. The output that is obtained from the hierarchical clustering is a dendrogram, showing the relationship between the clusters.

The distance between the two clusters is generally computed by drawing a straight line between the clusters, i.e., the Euclidean distance. Many other distance metrics have been developed along the way. The choice of the distance metric must be made on theoretical grounds that are based on the domain of study. If there exists no theoretical justification for an alternative, the Euclidean distance must be generally preferred.

After the distance metric has been chosen, it would be necessary to determine from where the distance is to be computed. The two most similar parts or the two least similar bits can be chosen. The centre of the clusters or some other criterion might be chosen as well. Other linkage criteria are also available. The choice of linkage criteria should also be made on the basis of theoretical considerations that are based on the domain of application.

In the top-down or divisive method, all the observations are assigned to a single cluster. Then the cluster is partitioned in the two least similar clusters. This procedure is performed recursively until just one cluster remains. It has been evident that the divisive algorithms produce more accurate hierarchies than what is obtained through the agglomerative algorithms. However, it might prove to be more complex.

Difference between K-means and Hierarchical Clustering

There are a few differences between these two type of clustering. The applications depend on their individual characteristics. While in certain scenarios, K-means clustering can be preferred, and, while in others, it is hierarchical clustering.

Thus, the two types of clustering can be differentiated on the basis of where they should be applied. The application of multivariate analysis is dependent depends on the type of data available and the requirements of the sample analysis.