Go through these Top 58 LINQ Interview Questions and Answers to get your dream job in the .NET platform or Database domain. We have collected the questions on LINQ essentials like LINQ Architecture, LINQ Query, Standard Query Operators, Lambda Expressions, Expression Tree, etc.

LINQ is a module of the .NET framework that connects the abilities of the initial data querying to the .NET languages. It was initially launched in 2007 as an essential part of the .NET framework. It is completely integrated and provides straightforward data access from the in-memory XML documents, databases, objects, etc. It integrates Visual Basic and C# queries using a group of extensions and provides a single user interface for various data sources.

LINQ is a more helpful querying language than SQL. In Comparison with SQL, LINQ is higher-level, tidier, and more straightforward. This blog will introduce you to the most frequently asked LINQ Interview Questions and Answers. We have around 60 interview questions on LINQ that will assist you with different expertise to get the maximum benefit from our blog.

We have categorized LINQ Interview Questions - 2022 (Updated) into 3 levels they are:

1. Define LINQ? Why is it important?

2. What are the kinds of LINQ?

Following are the different kinds of LINQ:

3. What are the benefits of LINQ?

Following are the benefits of LINQ:

4. What are the different methods to write the LINQ query syntax?

Following are the two different methods to write the LINQ query to the data sources:

6. What are the primary components of LINQ?

Following are the three primary components of LINQ:

7. Explain how LINQ is more important than Stored Procedures?

LINQ to SQL is part of ADO.NET programming. It handles the relational data as an object. LINQ to SQL transforms the language integrated query in an object to the SQL and dispatch them to the database for implementation. When database responses, the result of LINQ to SQL converts them back to the objects. LINQ to SQL endorses user-specified stored procedures and functions in the database.

LINQ contains three-layered architecture. In the uppermost layer, we will have language extensions. The bottom layer contains data sources. Generally, data sources are object implementation of the IQueryable or IEnumerable generic interfaces. Other than the fundamental LINQ query and the data sources, another element is called the LINQ provider. The applicability of LINQ providers is converting LINQ Query into the format such that existing data sources can understand it. 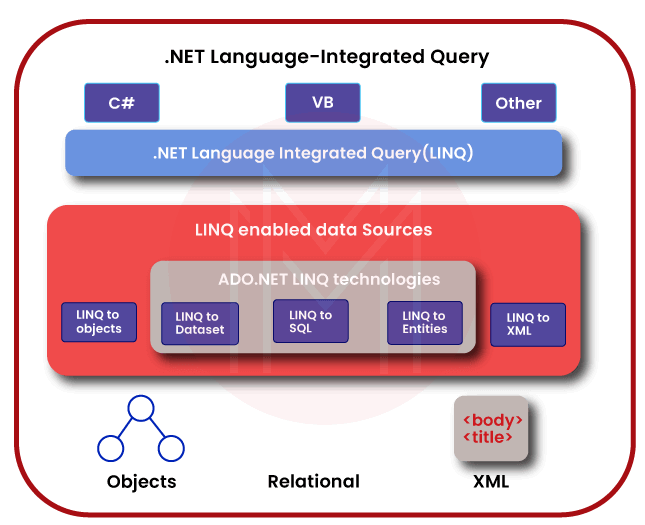 11. What are the differences between LINQ and Stored Procedures?

The following are the critical differences between LINQ and Stored Procedure:

If we have to utilise the LINQ in the ASP.NET web page, LinqDataSource is the essential part of the Dataset. We use it to set properties in the markup text, control, modify, and retrieve the data. We can also use it to declaratively bind the ASP.NET controls on the page to the data source. It is the same as the ObjectDataSource, and SQL Data Source controls.

13. What is LINQ Lambda Expression?

15. What is DataContext class? Explain its relation with LINQ?

The DataContext class stores information regarding the ways of connecting to the database. DataContext also changes the data in a database. We configure the DatContext classes with linked data that is benefited by the first item.

PLINQ refers to parallel LINQ. It is the parallel execution of the LINQ to the objects. It endorses parallel(analogous) programming and is closely associated with a parallel task library. PLINQ assists with some queries to spontaneously take benefit of the multiple processors. PLINQ can increase the rapidity of the LINQ to the objects through all the existing essences on the central computer more effectively.

Following are the benefits of the tier architecture styles:

19. What difference is between FirstOrDefault() and First() selector methods in the LINQ?

In some scenarios, we may have to execute a specific query repeatedly. LINQ enables us to create the query and compile it. Following are some of the benefits of Compiled Queries:

The Anonymous types are defined as the run-time compiler created by the compiler. We don’t need to define a name for creating an Anonymous compiler, but we can define the properties' names and allocate values to them dynamically.

Anonymous class is useful in LINQ queries. It stores the intermediate results while doing the queries:

22. Describe why the SELECT clause comes after FROM clause in the LINQ?

LINQ Providers are the group of classes that take the LINQ Query, which creates a method that implements the equivalent query against a specific data source.

In LINQ, Entity Classes are the basic building blocks of the system. They act as the object wrapper for the database table. It contains the stereotype of the entity.

26. What are the Quantifier Operators?

27. What are the advantages of Deferred Execution?

Deferred Execution evaluates the delayed expression till its realised value is required. It can considerably enhance the presentation when we need to affect vast data collections, particularly in the programs that encircle the series of chained queries.

28. What is an object-relational designer?

An object-relational designer offers a visual design surface for making the LINQ to SQL relations and entity class according to the objects in the database.

29. On what parameter does the GROUP BY clause group data?

The GROUP BY clause groups the basics that share the common attribute.

30. Which extension method do we require to execute the parallel query in PLINQ?

The “AsParallel” extension process is needed for running the query in the PLINQ.

31. What is the purpose of System.XML.Xlinq.dll?

System.XML.Xlinq.dll offers the functionality for working with the LINQ to SQL.

34. What are SkipWhile() and Skip() extension methods?

Skip(): It takes the integer argument from the provided IEnumerable and skips the top n numbers.

SkipWhile(): It continues to skip the elements until the input condition is true. It returns all remaining elements if a condition is false.

In the Query Expression, we use the “Let” clause for storing the result of the sub-expression for using it in the consequent clauses. We can do this through the “Let” keyword, which produces a new range of variables and initialises with a result of the expression we supply.

“WHERE” clause enables adding conditional filters to the query.

38. What are the benefits of using the LINQ Dataset?

Following are the benefits of utilising the LINQ Dataset:

Action is defined as the common delegates associated with the base class library of .NET. We can save only the methods with input parameters and void return types in Action. We can specify up to 16 parameters.

Predicate Delegate is offered by the basic class of the .NET library. In the Predicate, we are enabled to save only the methods with the one input parameter and the bool return type. Predicate delegates are helpful in the scenarios where the filter is required.

Check out the .Net Libraries

42. Name Command-Line that creates the code and mapping for LINQ to SQL component of the .NET framework?

“SqlMetal.exe” is the command-line tool that creates the code and maps LINQ to the SQL element.

LINQ to XML offers integral document modification abilities of DOM and supports the LINQ queries. Through it, we can amend the query and store the modifications of the XML document. It allows us to develop the queries and recover and lead a compilation of the attributes and elements.

When the LINQ queries any IEnumerable or IEnumerable() collection without utilising the intermediary LINQ provider or the API like LINQ to XML or the LINQ to SQL is known as the LINQ to objects.

45. Differentiate the Take and Skip clause?

46. What are Sequence and Query Operators in LINQ?

47. LINQ query is implemented in which statement?

49. How can we find an index of elements through Where() with Lambda Expression in LINQ?

For finding an index of the element through the overloaded version of the Where() with Lambda Expression:

50. What is the difference between utilising the LINQ to SQL and Entity Framework as the ORM?

Query Syntax is the same as the Structured Query language to the database. It is enclosed within VB or C# code.

Following are some essential topics of Query Syntax:

53. How will you count the elements of a collection or a list?

We use Count() function for counting the number of the items in the list.

54. What is the fundamental syntax of the LINQ Query in the Visual Basic and C#?

In the Visual Basic, we use the “From” keyword for starting the LINQ Query’s fundamental syntax, and it finishes with GROUP By or Select Keyword. We can use other keywords like Order By, where, Order By Descending, etc., to perform additional functions like creating or filtering data in a particular order.

In the C#, the fundamental syntax begins with the “From” keyword and “ends” with GROUP BY or Select keyword. We can also use other clauses like Order By, Where, Order By Descending, etc., to carry out other tasks like creating or filtering data in a particular order.

55. How can we allocate the Lambda Expression to a delegate?

For allocating the Lambda Expression to a delegate:

56. What is the use of standard query operators in LINQ?

We use Standard Query Operators to

57. How can we retrieve the single row with LINQ?

For retrieving the single row with the LINQ, we require

58. How can we use LINQ with the databases?

LINQ supports SQL, XML, Objects, and Datasets. Using the LINQ to Datasets or LINQ to objects, we can utilise the LINQ with other databases. The datasets and Objects look after the database operations, and LINQ only requires to handle with those objects and not database operations.