LXD and Docker are quite popular container management tools that efficiently manage containers to develop and run applications. Although they seem to be similar, they have many differences in many aspects. Do you want to know the differences between LXD and Docker and which one is better? No doubt you are at the right blog post. This blog will uncover more about LXD and Docker. We have compared the tools from every angle that will help you to understand them deeply and choose the right one for you. Let’s dive in!

Advantages and Disadvantages of LXD

Advantages and Disadvantages of Docker

Businesses are getting too complex nowadays because of their dynamic nature and scaling requirements. It's a simple but important note that you must choose smart tools to simplify complex processes. Software development with the right tools will result in quick delivery and deployment.

On that note, this blog compares LXD and Docker in terms of their features, pros and cons, similarities, and differences. It will help developers or operation engineers choose the right one for developing and managing their applications. Know that LXD and Docker are widely used as containerization tools that effectively manage containers for isolating applications, simplifying development processes, and providing robust security. Simply put, you can securely develop, run, control, and scale applications with these container management tools. Let’s start now!

LXD vs Docker - Table of Contents

Know that LXD is written in Go programming, and you can get the source code of LXD on GitHub. Also, LXD is image-based and offers many Linux distributions. LXD offers a template distribution system to create containers and operate them efficiently. With a single command, you can manage instances in system containers. Overall, LXD supports fine-grained control over applications and ensures high-scale operational security.

What are the Key Features of LXD?

The following features of LXD will let you know why it is being used as one of the effective container management tools.

2. Images: LXD has an in-built image store. It supports importing images from three sources: remote image server, file on a remote server, and direct pushing of the image files. LXD supports two image formats such as unified tarball and split tarball. Unified tarball uses a single file consisting of an instance root and the required metadata. On the contrary, split tarball uses two files where one file contains an instance root, and another file consists of the metadata.

3. Networking: LXD supports network types such as bridge network and OVN network. In the bridge network type, LXD creates a virtual L2 Ethernet in which you can connect instance NICs. A network device, NIC, is the short form of a Network Interface Card. Another one, the OVN network, is a software-defined networking system. It supports virtual network abstraction and building private clouds. Additionally, LXD supports external networks such as the Macvlan network, physical network, and SR-IOV network.

4. REST APIs: REST API is known as Representational State Transfer Application Programming Interface. REST API communicates with LXC through the libLXC library. Also, this API helps communicate between LXD and clients over HTTPS. The data is encapsulated over a Unix socket for local operations and SSL for remote operations. Note that REST APIs have to return status information. For this, LXD uses three standard return types: background operation, standard return value,  and error.

What are the Advantages and Disadvantages of LXD?

If you are still wondering why LXD is one of the powerful containerization tools, the following advantages of LXD make you clear:

Every coin has two sides. Likewise, every tool comes with pluses and minuses. No doubt LXD has a few shortcomings too. Let's see them below:

Docker is one of the end-to-end and lightweight containerized platforms used to build, run, and share applications. Mainly, Docker allows applications to run on loosely-coupled environments known as containers. You can run applications in different containers, which will help to reduce the conflict between languages, frameworks, and binaries. With Docker, you can manage applications throughout their development lifecycle – no matter the size of the application. In short, you can build portable, fast, reliable applications by replacing mundane configuration tasks with Docker.

You can get Docker images from the Docker Hub repository. And you can use Docker images to develop applications on any platform – no matter whether it is a Desktop or Cloud. For example, you can run Docker in AWS ECS, Google GKE, Azure ACI, etc. Not only this, you can share applications across different platforms and environments. Docker is the best tool for developing stateless and microservices applications since it isolates applications effectively.

Administrators, Developers, and DevOps professionals use Docker for managing applications. Companies from mid-size to enterprises use Docker widely. Especially software development and IT companies widely use Docker. For example, JPMorgan, ThoughtWorks, Neudesic, SLALOM, and LLC use Docker extensively.

What are the Key Features of Docker?

There are a lot of features that make Docker one of the popular container management tools. Let’s discuss them below:

[ Check out: Installing Docker on Windows and Mac ]

2. Docker Build: This tool helps build portable container images. In other words, you can create images for multiple operating systems. This tool also supports bundle images and sharing them anywhere – even with Docker Hub. You can use suitable build drivers to make builds and optimise them through effective cache management. Besides, you can customize, automate, and extend the builds seamlessly.

3. Docker Dashboard: Docker provides a quick view of containers running on a machine. It will help interact with containers and manage them effectively. It provides a quick view of container logs. So, you can easily manage container lifecycles, such as stopping or removing containers. Additionally, the dashboard provides ‘images view’ that displays the list of Docker images. You can view scanning reports of images in the dashboard, from which you can know the vulnerabilities in the images. Also, you can see the list of images shared with the Docker hub. What's more! ‘volumes view’ helps to see the list of volumes, which will support creating and deleting volumes quickly.

What are the Advantages and Disadvantages of Docker?

No wonder Docker has many advantages, like LXD. Let’s get to that:

Undeniably, where there are pros, there can also be a few cons. Let’s now look at the cons of Docker:

Some similarities exist between LXD and Docker. Let’s have a look at the following:

Many differences exist between LXD and Docker. The following will talk through the same in detail. 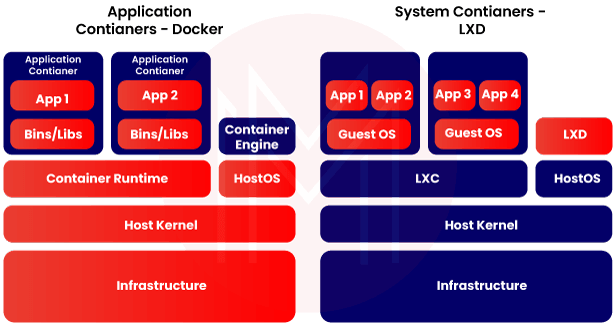 [ Also Check out Vagrant vs Docker ]

It’s a short but important note that LXD is a fast, secure, lightweight, full operating system container management tool. As you know, Docker is a lightweight container management platform suitable for container isolation, running microservices and stateless applications, and much more. It's no wonder you can run Docker inside LXD containers. But the ultimate question is - which one is better? The answer is that it depends on the requirements. This is because LXD is good in certain features, whereas Docker is good in certain features. Thus, the selection of the right tool must be made based on the requirements of the applications.