What is Docker? How does Docker works?

Docker is one of the powerful tools that gained immense popularity in recent years. Many IT companies are turning towards Docker for their production environment. Without having explicit knowledge of what Docker is and what it does, there’s no way to know, how to use it in your environment. In this article, we take the opportunity to explain what Docker is and where it fits in the production environment in the most simple way.

Docker is an open-source containerization platform. It enables you to build lightweight and portable software containers that simplify application development, testing, and deployment. Before moving ahead with Docker, let’s understand what are containers and why to use them?

Containers offer all the benefits of Virtual Machines, including application isolation, disposability, and cost-effective scalability. But the additional layer of abstraction (at the OS level) offers important additional advantages:

We hope you now got a clear idea of what a container is.

Docker is a tool designed to create, deploy, and run containers and container-based applications. It can run on Linux, Windows, and macOS. Dockers allow developers to package applications into containers that combine application source code with all the dependencies and libraries needed to run the code in any environment. Docker makes it easier and simpler to run containers using simple commands and work-saving automation.

The benefits of using Docker are:

The docker platform enables workloads virtualization in a very portable way, enabling distributed applications to cross the boundaries of servers. You can even manage the lifecycle of containers. The benefits of using the Docker platform are listed below:

What Is Docker Engine:

The docker engine is the core of Docker. It uses client-server technology to create and run the containers. It offers two different versions, such as Docker Engine Enterprise and Docker Engine Community. 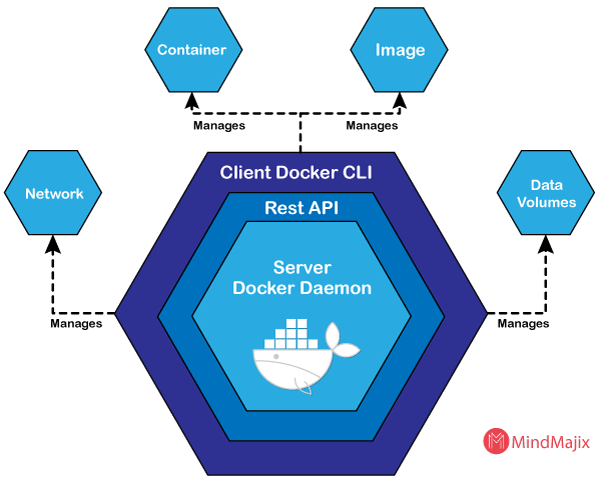 The major components of the Docker Engine are:

The Command-Line Interface uses REST API to interact or control the Docker daemon through direct CLI commands or scripting.

What is a Docker image?

What is Docker Container?

Containers are a runnable instance of images or the ready applications created from docker images. Through Docker API or CLI, we can create or delete a container. Containers can be connected to one or more networks, even create a new image, or attach storage to its current state. Containers are by default isolated from each other and their host machine.

What is Docker Registry?

Finally, the docker registry is the place where Docker images are stored. The docker Hub is a public registry that anyone can access and configure Docker to look at images on the docker hub by default. We can even run a private registry. Docker Trusted Registry (DTR) is included if we use Docker Datacenter (DDC).

How Does Docker Work?

We will understand Docker working by having a clear look at its architecture. 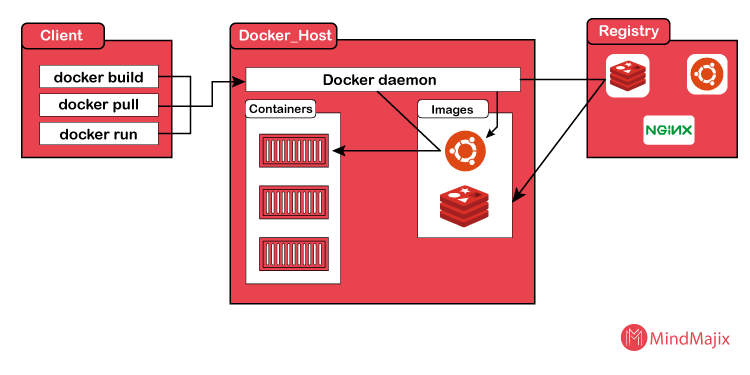 The docker client communicates to the docker daemon using a REST API, which internally supports to build, run, and distribution of docker containers. Both the client and daemon can run on the same system or can be connected remotely.

The docker daemon monitors API request and control docker objects like containers, images, volumes, and networks. For managing docker services, a daemon can also communicate with other daemons.

The docker client is the major way that provides communication between many dockers users to Docker. The client sends commands (docker API) used by the users such as docker run to the docked. To manage docker services, docker clients can be communicated with more than one daemon.

What is Docker deployment and orchestration?

If we are working on a few containers, it’s easy to manage the application on the Docker engine itself. If deployment includes several containers and services, it’s difficult to manage without the help of these purpose-built tools.

Docker Compose is used for simplifying the process of developing and testing multi-container applications. It creates a YAML file and determines which services to be included in the application. It can deploy and run containers using a single command. It’s a command-line tool that takes a specially formatted descriptor file to assemble applications out of multiple containers and run them in concert on a single host. You can also define nodes, storage, configure service dependencies using Docker Compose.

More advanced versions of these behaviors—what’s called container orchestration—are offered by other products, such as Kubernetes and Docker Swarm.

Docker includes its own orchestration tool called Docker Swarm. It allows you to manage multiple containers deployed across several host machines. The major benefit of using it is providing a high level of availability for applications.

In short, here’s what Docker can do for you: it makes it easier to develop containerized applications, get more applications run on the same hardware than other technologies, and functions simpler to manage and deploy applications. We hope the concepts that we covered on Docker and its usage were helpful for you.

If you have any interesting questions on Docker, post a comment below, we would love to help up.