If you're desperate about becoming an Adobe CQ5 professional, MindMajix has put together a list of AEM interview questions to consider about. These Adobe CQ5 Interview Questions 2022 can help you ace your interview and land your desired job as an Adobe CQ5 Developer

What is Adobe CQ5 and Its Advantages?

Explain the difference between AEM vs Sitecore?

Role of Dispatcher in CQ5?

How to customize page property dialogue?

Role of Persistence Manager in CQ5?

What is Replication in CQ5?

Explain the OSGi in CQ5?

Can we restrict certain users not to display some digital assets?

If you're looking for Adobe AEM Interview Questions & Answers for Experienced or Freshers, you are in right place. There are a lot of opportunities from many reputed companies in the world. According to research Adobe CQ5 has a market share of about 0.4%. So, You still have the opportunity to move ahead in your career in Adobe CQ5 Development. Mindmajix offers Advanced Adobe CQ5 Interview Questions 2022 that helps you in cracking your interview & acquire a dream career as an Adobe CQ5 Developer.

1. Explain the difference between Aem vs Sitecore?

3. What is the purpose of clientlibs?

4. What are Dependency/Dependencies in the client library?

Ans: It is a list of other client library categories on which this library folder depends. For example, given two cq: ClientLibraryFolder nodes F and G, if a file in F requires another file in G to function properly, then at least one of the categories of G should be among the dependencies of F.

5. What is the embed and difference between dependency and embed in the client library?

Embed: Used to embed code from other libraries. If node F embeds nodes G and H, the resulting HTML will be a concentration of content from nodes G and H.

Dependency: Please refer to the above answer.

6. Difference between package and bundle?

Package: A Package is a zip file that contains the content in the form of a file-system serialization (called “vault” serialization) that displays the content from the repository as an easy-to-use-and-edit representation of files and folders. Packages can include content and project-related data.

Bundle: A bundle is a tightly coupled, dynamically loadable collection of classes, jars, and configuration files that explicitly declare their external dependencies (if any).

7. Can you explain the life cycle of the OSGi bundle?

Ans: Following are the life cycle states of OSGI:

Installed: The bundle has been successfully installed.

Active: The bundle has been successfully activated and is running; its Bundle Activator start method has been called and returned.

Uninstalled: The bundle has been uninstalled. It cannot move into another state.

parsys: It is called the “Paragraph System” component in which you can add other components at the page level.

9. What is the process step in the workflow?

Ans: It is a workflow component that can be found at this is used for calling a java class in the workflow.

Ans: Versions of CQ before 5.5 were based on a servlet container (CQSE, by default, though others could be used) running with multiple web apps: One for the CRX content repository and one for the OSGi container which itself contained Sling and AEM. The Sling web app was bound to the root and handled most of the request processing.

Ans: The dispatcher is a CQ5 caching and/or load balancing tool. The dispatcher also helps to protect your AEM server from attack. It caches responses from publishing instances, to increase the responsiveness and security of your externally facing published website

Ans: Replication is the process of activating/publishing the page from Author Instance to Process Instance.

13. What is the difference between par base and parsys?

Ans: Multi-Site Manager (MSM) enables you to easily manage multiple websites that share common content. MSM lets you define relations between the sites so that content changes in one site are automatically replicated in other sites. For example, websites are often provided in multiple languages for international audiences.

When the number of sites in the same language is low (three to five), a manual process for synchronizing content across sites is possible. However, as soon as the number of sites grows or when multiple languages are involved, it becomes more efficient to automate the process.

15. How to customize page property dialog? 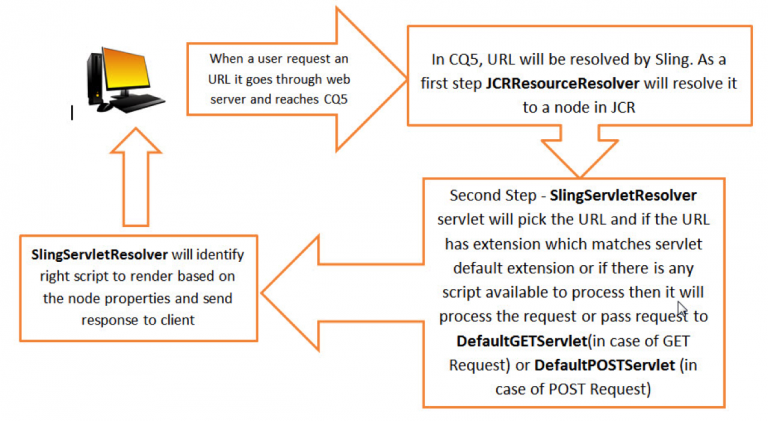 17. What is the difference between the live copy and language copy?

Live Copy: Copy created from an existing site or blueprint is called Live Copy. Rollout configurations for this Live Copy can be configured from the tool's console.

Language Copy: A site that is created using a language tool is called a Language copy. Basically to create a site for different languages.

18. Role of Persistence Manager in CQ5?

19. What is the difference between c: import, sling: include, and CQ: include? What is the advantage of each tag?

I assume this is the import tag of the Standard Tag Library. This tag is documented and does not know about Sling directly.

This is the include tag of the Sling JSP Tag library. This tag knows about Sling and also supports RequestDispatcherOptions.

This tag is a Communique-specific extension of the Sling JSP Tag library include tag. IIRC supports callings scripts in addition to just including renderings of resources. In a Communiqué application, I would suggest generally use the Communique or Sling include tag since this provides you more Sling support. You may use the JSTL import tag if you don’t have specific requirements for Sling extended features, plan to use the JSP (fragment) outside of Communique, or if you want to further process the generated (imported) content with a reader or a variable.

20. How to connect to an external Database?

Ans: To connect to an external DB, a connection pool needs to be configured by creating a node of type sling: OsgiConfig. The below screenshot is for connecting to the SQL database, but if you want to connect to another DB then properties values need to be changed accordingly: 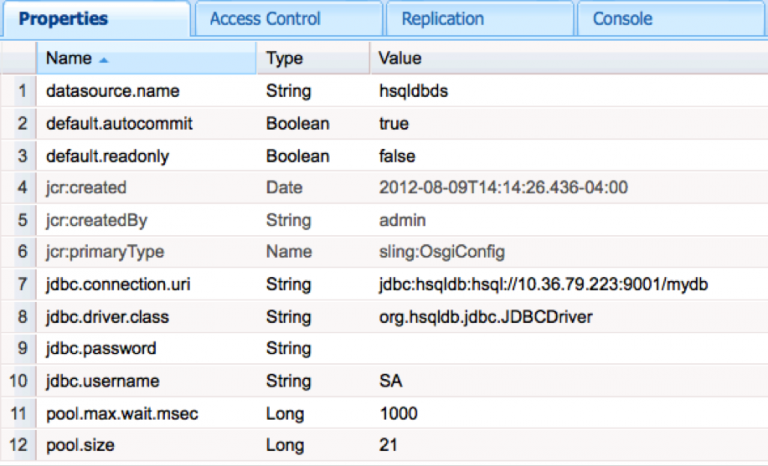 Use the below code to get a connection:

Ans: The DAM allows you to create renditions of an image that include different sizes and versions of the same asset. You can use those renditions in the content of your website, and that can be helpful when you need to create thumbnails or smaller views of large, high-resolution images.

When you are creating multi-device websites where Internet bandwidth is a varying concern, this feature becomes even more important. After all, you want to minimize the size of any files a site visitor has to download to view your site. Making your site load faster improves your search engine optimization and the user experience.

22. What is CQ5? Why Content Management System is Required? Advantages of CQ5 over other CMS?

CQ5 uses  Apache Felix as the OSGi container. Therefore different parts of cq5 can be independently started and stopped. Why a content management system is required? Some websites are very dynamic in nature, content needs to be updated frequently, so it is easier to manage the content of such websites using a CMS.

Advantages of CQ5 over other CMS:

23. What is the technology stack of cq5? 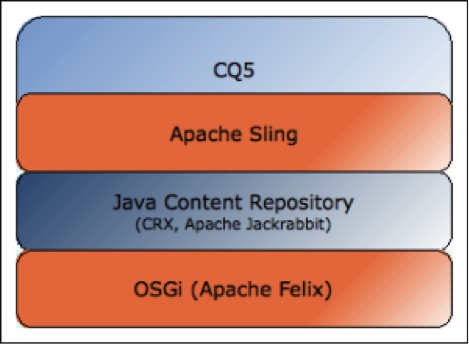 Java Content Repository is a specification provided by the Java community to access the content repository in a uniform way (platform-independent and vendor-independent way). The specification was initially released as JSR-170(JCR 1.0) and then later revised version 2 as (JCR-283).The java. JCR API provides the various classes and interfaces to access a content repository.

25. What is REST? What is a RESTful Framework?

A resource can be essentially any coherent and meaningful concept that may be addressed. A representation of a resource is typically a document that captures the current or intended state of a resource. Apache Sling is a RESTful framework to access a java content repository over HTTP protocol.

Ans: A dispatcher is a CQ5 tool for caching and load-balancing. It has 2 responsibilities.

28. What is Reverse Replication?

29. Difference between Dialog and Design Dialog?

Ans: Dialog is a key element of your component as they provide an interface for authors to configure and provide input to that component. The user input will be stored at the page level.
Design dialog will share the content at the template level. Also, we can dynamically change the content in design mode.

31. How bundles are loaded and installed in CQ5?

Ans: This is managed by the Sling Management Console of CQ5.

Ans: CQ5 CRX is pre-loaded to run within a cluster, even when running a single instance. Hence the configuration of multi-node clusters with little effort happens in CQ5.

33. What is the contribution of the Servlet Engine in CQ5?

Ans: Servlet Engine pretends as a server within which each CQ (and CRX if used) instance runs. Even though you can run CQ WCM without an application server, always a Servlet Engine is needed.

34. Explain the role of the Dispatcher in CQ5?

Ans: In CQ5 Dispatcher helps to cache and load balance. The main responsibilities are,

36. Explain the methods of Caching adopted by the Dispatcher?

37. How you can inherit the properties of one dialog to another dialog?

In any case, every input field of a dialog must have a unique name, else they will point to the same property path relative to the JCR: content node of the component when used on a page.

38. Can we restrict certain users not to display some digital assets?

Ans: You can always limit who can access certain folders in CQ Digital Assets by making the folder part of a CUG(closed user group).

Steps to make a folder part of a CUG:

39. Difference between the OSGi bundle and the Normal Jar file?