What are the components that are used in JBoss Cache?

What are the steps that are involved in deploying the JBoss cache using the MBean service?

What is the procedure to access the JBoss Cache MBean service?

What are the main directories provided in JBoss?

What are the different types of services provided by the JBoss server?

What are the core services provided by the JBoss server?

What are the Logging Services provided by the JBoss server?

What are the different types of log levels that are used in logging services in JBoss?

What is meant by the logging threshold in JBoss?

If you're looking for JBoss Interview Questions for Experienced or Freshers, you are at the right place. There are a lot of opportunities from many reputed companies in the world. According to research, JBoss has a market share of about 1.8%. So, You still have the opportunity to move ahead in your career in JBoss Administration. Mindmajix offers Advanced JBoss Interview Questions 2022 that help you in cracking your interview & acquire a dream career as JBoss Administrator.

2. What are the components that are used in JBoss Cache?

This keeps the replicated data across the network in case any failure arises. The transactional property is due to the fact that users can create and configure a compliant transaction manager and make their own cache operations. If the cache is not replicated then it is running in a local mode and it has two components that are involved:

3. What are the steps that are involved in deploying the JBoss cache using the MBean service?

Ans: JBoss Cache provides an MBean service that can be registered with the environment to allow cache access using JMX. The steps that are involved in Deploying JBoss Applications cache that is using MBean service is that:

4. What is the procedure to access the JBoss Cache MBean service?

5. What are the main directories provided in JBoss?

Ans: The main directories that are provided in the JBoss directory structure are as follows:

6. What are the different types of services provided by the JBoss server?

Ans: The services of the server are based on the type of files that are provided and kept by the server. The server provides the service from basic to advanced and they are classified as:

7. What are the core services provided by the JBoss server?

This way a service can be stopped and modified and this effect when the server gets restarted. It doesn’t list the services that are removed in the service management console.

8. What are the Logging Services provided by the JBoss server?

Ans: The logging server allows the user to log into the server and save its logging details which might be used again. The package that is used for logging is log4j. The logging onto a server is controlled from a central file that resides in the configuration file that is managed separately.

The file name I given is log4j.xml and this file defines a set of appending files that also considered as log files. The file follows a specific format that should go with the message and there is also a filtering option that is used to filter out the details that are not required. The output of this file gets to both the console and a log file that is also called a server log is given in the log directory. Logging services are very important to manage as it keeps the defined data on the server of people who are logging in.

9. What are the different types of log levels that are used in logging services in JBoss?

Ans: There are four different types of log levels that are used to show the services that are present inside the logging in JBoss. The log levels are as follows:

10. What is meant by the logging threshold in JBoss?

Ans: The logging threshold is given as INFO as it is a level on which all the informational messages, warning messages, and error messages on the console are produced and shown, but not the debug messages. It is managed through the file as there is no threshold set for the server.log file. The generated logging messages will be stored in that section to provide all the information from one place.

11. Write a program to show the change in level in the JBoss server?

Ans: If the change in the level has to be set from INFO to DEBUG level then the output from the container-managed persistence engine has to be changed to the DEBUG level. A redirection takes place in separate files and a log is maintained with the name cmp.log to compare the files later on. The code that is written has to be added in the log4j.xml file: 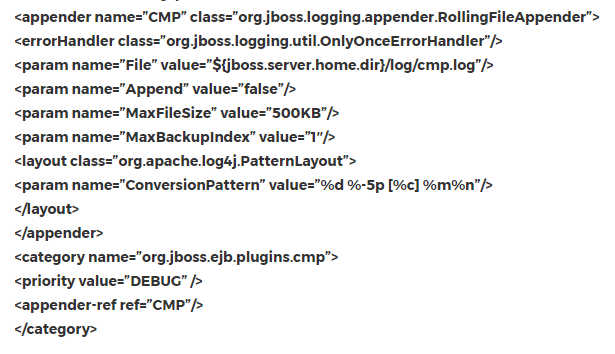 12. What is the role of an appender in logging when used in JBoss?

Ans: The file that is created using the appender specifies the use of it as a logger for the package org.JBoss.EJB.plugins.CMP. This makes it easy for the server to look at CMP and compare the two log files. The files are used to produce a new log file every day and don’t produce any file even there are changes made every time.

The service has to be restarted and during the restart, there is no server file gets written or done. The older files consist of the dates that are written and added to the name of it. The log directory consists of HTTP request logs that are produced by the web container.

13. What are the Security Services provided by the JBoss server?

Ans: Security Service consists of the domain information that is stored in the file in the login config.xml file and it has all the named security domains that specify the number of login modules that are used for authentication purposes in the domain. The security for the application can be used till it specifies the name of the domain to be used in specific JBoss deployment descriptors.

The files that are to be considered are jboss.xml and JBoss-web.xml. This is used to secure the JMX console application that comes with the JBoss. Every aspect of the server is controlled through the JMX console. The applications are kept password protected and any remote user can completely control the server without having any detailed information.

14. Write a program to show the security domain feature to cover the application in JBoss.

Ans: The security domain provides features through which the server can be protected. This is done using the file JBoss-web.xml this can be used to deploy in JMX console. war/WEB-INF/ directory. JBoss uses JAAS services to provide the pluggable authorization modules and the code that is given below explains it as well:

This links to the security domain where the web application can be connected and security policies can be applied to it. URLs are trying to protect the server configuration that is allowed to configure the web.xml file in the same directory and the security constraints are put together to provide the user name and password as well.

15. Write a program to show the security constraints that show the role of the user and the admin who is using the server.

Ans: The security constraints have restrictive access to the HTML JMX console and allow few users with specified roles to be in the JBoss Admin Console. The modification in the roles can be done and the file can be edited to modify the security domain element to enable the secured feature of the services. The code is as follows: 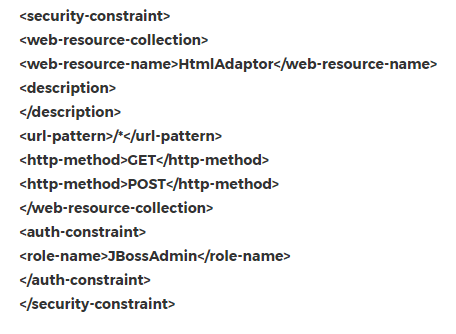 16. Write a program to show how to set the username and password using the security domain in JBoss?

Ans: The username and password are required for security purposes to produce at the logging time. The user name and passwords get stored in the JMX console security domain that manages the application. The configuration file can be provided using the login-config.xml. The program that is being written in which the modification can be done is shown below:

This is the configuration file that uses a simple file-based security policy and found in the config directory. It consists of the JBoss Server Configuration and the properties that are required to assign the user about the files.

17. What are the additional services that are provided with the JBoss server?

Ans: Additional services are used as non-core, hot-deployable services that are added to the deploy directory and consist of XML descriptor files. It is consisting of the following properties and files that are used as:
Service.xml or the SAR (JBoss Service archive) file that consists of both XML descriptors and additional resources that are required by the service provider all in a single archive file.

18. What is the purpose of JMS and Message-Driven Beans in JBoss?

Ans: JMS is used for messaging systems and it also consists of message-driven beans that are used in JBoss. This consists of the MDB concepts that are used in the JBoss-build.xml file. This JSM Destination (Java message service destination) provides a middleware orientation to send messages between two or more clients.

JMS is a part of the Java Platform that is used to develop the application that is under the Java platform. This also allows the application components to be based on the Java Enterprise Edition (JEE). It handles the creation, sending, receiving, and reading the messages. It also allows the communication between many different components that are distributed in many parts and are loosely coupled, reliable, and asynchronous message passing.

19. What is the process of compiling and packaging the MDB files?

Ans: To compile the files of MDB (Message-driven beans) first there needs to be a compilation process that will take place invoking the compile-mdb that targets the simple message directory. It produces the targets to be made archives for the bean and the client uses the file that is in the JAR directory. The commands that are used to compile the files are as follows:

These files that are used and made by the command get combined in the directory and that directory will be called the package. It consists of the deployment descriptors that are used in the jar directory containing all the archives that are produced by the build of the MDB files.

20 Explain with an example of the implementation of the source queue for MDB?

Ans: The implementation of the source queue for MDB is used to be the container-specific file that consists of information regarding the queue like queue name for MDB that resides in jboss.xml and the source file that is used with it remains in the queue till the message is not being transferred by the server.