Now that you have grasped the basic concepts of the new configuration file, we will have a look at the peculiarities of single services. Discussing all single subsystems in a single chapter is a daunting task for both the author and for those who will read it later. That’s why we had to find criteria for approaching all subsystems gradually to make reading interesting and easy-to-understand.

In the following image, you can find a rough representation of core JBoss AS 7 subsystems 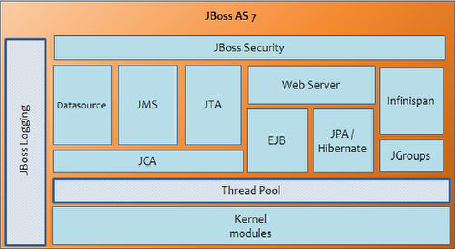 Let’s see each subsystem in a separate section.

Thread Pools address two different problems: they usually deliver improved performance when executing large numbers of asynchronous tasks, due to reduced per-task invocation overhead, and they provide a means of bounding and managing the resources, including Threads, consumed when executing a collection of tasks.

By appropriately configuring the Thread Pool section, you can effectively tune the specific areas that use that kind of Pool to deliver new tasks. The application server Thread Pool configuration can include the following elements:

A Thread factory (implementing java.util.concurrent.ThreadFactory ) is an object that creates new Threads on demand. Using Thread factories removes hardwiring of calls to new Thread, enabling applications to use special Thread subclasses, priorities, and so on.

The Thread factory is not included by default in the server configuration as it relies on defaults, which you will hardly need to modify. Nevertheless, we will provide a sample configuration of it for the experienced user who requires complete control of the Thread configuration.

So, here’s an example of a custom Thread factory configuration:

And here are the possible attributes that you can use when defining a Thread factory.

The name attribute is the name of the created Thread factory.

The thread-name-pattern is the template used to create names for Threads. The following patterns may be used:

A bounded Thread Pool is the most common kind of Pool used by the application server, as it helps prevent resource exhaustion by defining a constraint on the Thread Pool’s size; the other side of the medal is that this kind of Pool is also the most complex to use. Its inherent complexity derives from the fact that it maintains both a fixed-length queue and two Pool sizes: a core size and a maximum size.

Each time a new task is submitted, if the number of running Threads is less than the core size, a new Thread is created. Otherwise, if there is room in the queue, the task is queued.

If none of these options are viable, the executor needs to evaluate if it can still create a new Thread. If the number of running Threads is less than the maximum size, a new Thread is created. Otherwise, the blocking attribute comes into play. If blocking is enabled, the caller blocks until a room become available in the queue.

And here’s a sample of bounded Thread Pools, which is included in the configuration:

This is a short description of each attribute: 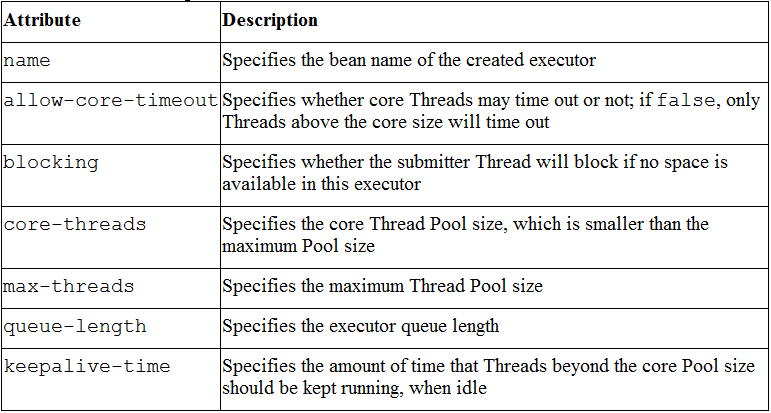 Queue size and Pool size are two samples of performance trade-off for each other. When using a small Pool with a large queue, you cause to minimize the CPU usage, OS resources, and context-switching overhead. It can, however, produce an artificially low throughput. If tasks are strongly I/O bound (and thus frequently blocked), a system may be able to schedule time for more Threads than you otherwise allow. Use of small queues generally requires larger Pool sizes, which keeps the CPUs busier but may encounter unacceptable scheduling overhead, which also decreases throughput.

This other kind of Thread Pool executor follows a simpler (but riskier!) approach; that is, it always accepts new tasks. In practice, the unbounded Thread Pool has a core size and a queue with no upper bound. When a task is submitted, if the number of running Threads is less than the core size, a new Thread is created. Otherwise, the task is placed in a queue. If too many tasks are allowed to be submitted to this type of executor, an out of memory condition may occur.

Due to its inherent risk, unbounded Thread Pools are not included by default in the server configuration. We will provide a sample here, with only one recommendation: don’t try this at home, kids!

If you want to know more about the meaning of each Thread Pool element, you can refer to the bounded Thread Pool table.

As its name implies, this is a Thread Pool executor with no queue. Basically, this executor short-circuits the same logic of the bounded Thread executor, as it does not attempt to store the task in a queue.

So, when a task is submitted, if the number of running Threads is less than the maximum size, a new Thread is created. Otherwise, if blocking is enabled, the caller blocks until another Thread completes its task and accepts the new one. If blocking is not enabled, the task is assigned to the designated hand-off executor, if one is specified. Without any designated hand-off, the task will be rejected.

The server-scheduled Thread Pool is used for activities on the server-side that require running periodically or with delays. It maps internally to a java.util.concurrent.ScheduledThreadPoolExecutor instance. 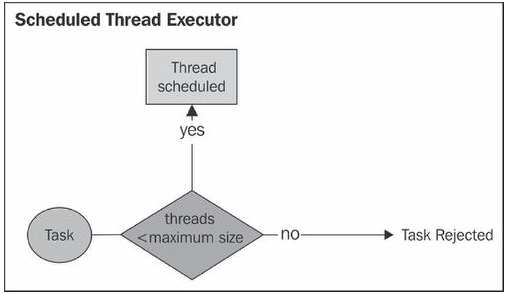 This type of executor is configured with the scheduled-thread-pool executor element: