When you are configuring a domain server, you will find that the clustering subsystem is already part of the main configuration file, domain.xml.

Inclined to build a profession as JBOSS Developer? Then here is the blog post on JBOSS Training Online.

So, in order to use clustering on a domain, you have at first to configure your server groups to point to the ha profile.

As highlighted, in the socket-binding-group element, we are referencing the hasockets group, which contains all socket bindings used for a cluster: Your last effort will be defining the servers that are part of the domain (and of the cluster). To ease our work, we will reuse the same domain server list that is contained in the distribution. 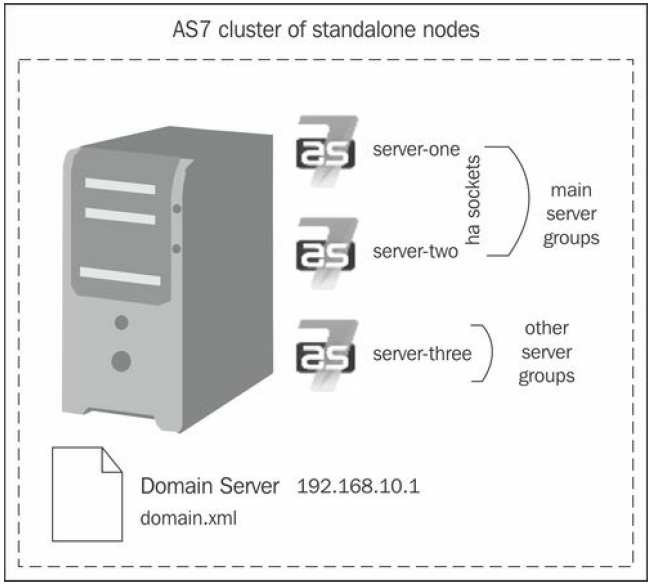 For each server, you have to refer, within your host.xml, to the socket binding group named ha-sockets, which we have just shown:Your clustered domain is ready for running. Launch your domain of servers using the standard batch script (domain.bat/domain.sh) and the server groups will now point to the ha profile and form a cluster of two nodes.

The clustering communication is carried out, by default, using UDP and multicasts information around the cluster. If there are problems, typically it is because of one of the following reasons:

The jgroups-3.0.0.Final.jar can be located in the JBOSS_HOME/modules/org/jgroups/main path of your server distribution

If multicast works correctly, you should be able to type in the McastSenderTest window and see the output in the McastReceiverTest as shown in the following screenshot:

If multicast works correctly, you should be able to type in the McastSenderTest window and see the output in the McastReceiverTest as shown in the following screenshot:

Finally, if you are experiencing troubles with the default multicast address or port, you can change it at any time digging into the jgroups-udp socket binding: