In this article, we will discuss a tool that helps to automate testing and also with data gathering. The tool is known as LabVIEW, i.e., Laboratory Virtual Instrument Engineering Workbench. It is known as a graphical programming environment that is widely used in research labs, industries, and academics.

LabVIEW offers more flexibility when compared to the industry standard laboratory instruments because LabVIEW is software-based.  The data controls can be easily managed when LabVIEW is utilized.

Firstly, we will understand what LabView is, and then we will discuss the advantages of using this software tool and go through the basic workflow of the LabVIEW software.

Unlike traditional programming languages like C, C++, or Java, programming is executed in terms of text. LabView is not just a programming environment, it offers much more than a coding platform. It is an interactive program development system that is specifically designed for people like scientists and engineers.

The LabVIEW environment works on computers like Windows, Mac OS X, and Linux. The programs that are created using the LabVIEW environment can be executed on platforms like Microsoft Pocket PC, Palm OS, Digital Signal Processors (DSPs), microprocessors, and Field-programmable Gate Arrays (FPGAs).

In this section, the users will be able to understand the benefits that are associated with LabVIEW.

With the help of the user-intuitive graphical interface of LabVIEW, users will be able to avail the following benefits:

Dataflow and the Graphical Programming Language:

In this section, we will discuss the programming language that is used in LabVIEW and how the data flow is represented graphically.

The program development efforts related to LabVIEW are different compared to the standard development, which is nothing but text-based programming where developers use predefined text syntax.

When it comes to LabVIEW programming, the coding is carried out using a graphical programming language, which is often called “G”. Using this language, programs are created using pictorial forms which in turn are called “Block Diagrams”.

Using a graphical programming language, the developers will be able to achieve the tasks in a short duration of time, and at the same time don’t have to bother about adding semicolons, curly braces, etc.

With the use of graphical programming, the developers will be able to focus on the data flow within the application.

In the below screenshot, you will be able to see the graphical interface of LabVIEW. 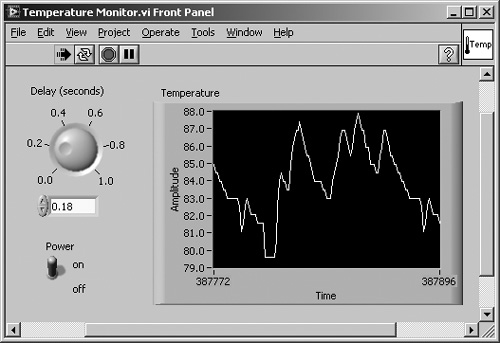 In the above screenshot, the user will be able to see the Graphical code. The graphical programming helps the users to understand the data flow within the application. The below screenshot is just an example that depicts the data flow. 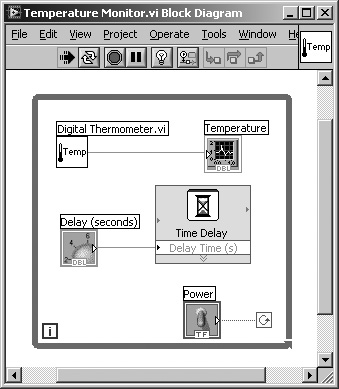 The main difference between traditional tools and LabVIEW:

In this section, we will discuss the main differences that the LabVIEW tool has compared to the traditional tools.

In this section of the article, we will try to understand the components that are available within a virtual instrument.

The LabVIEW program consists of single or multiple virtual instruments, which are commonly abbreviated as (VI’s). It is pronounced as “Vee's eye”.

A virtual instrument (VI) has three main components, they are :

Let us understand these three components in detail and also explore the tool controls/ options further in the article.

When the user clicks on the LabVIEW start button, a screen will appear with few options. 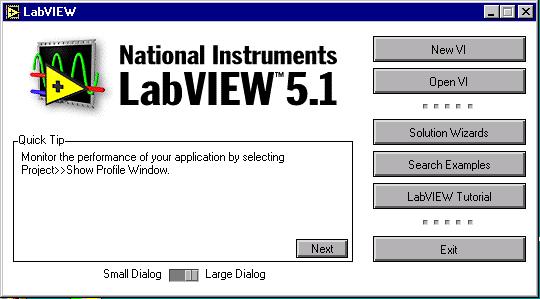 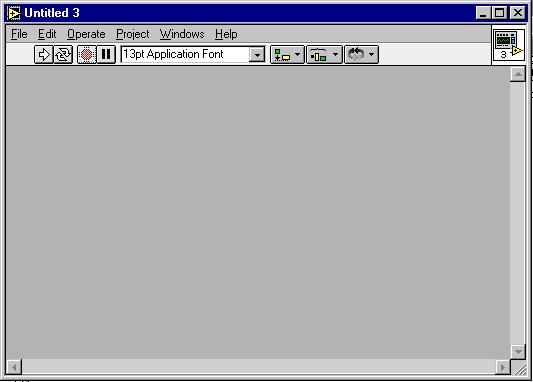 This is nothing but a Front Panel screen.

A front panel is nothing but an interactive interface for the user. It displays the entire panel where the users will be able to select different options and execute the process. Further, the front panel has push buttons, graphs, knobs, indicators, and other options. The data can be keyed in by using a mouse or keyboard. The results can be viewed on the screen.
While creating a new program, the user will have to decide the inputs and outputs which will be available. Then, place the cursor on the gray area in the front panel and right-click. A new window will appear, i.e. Control window will popup.

A screenshot is displayed below, showing the controls window on the front panel. 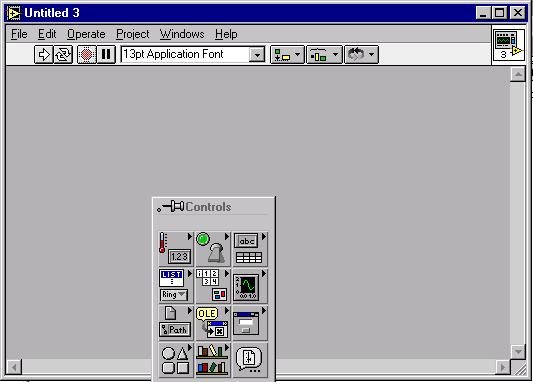 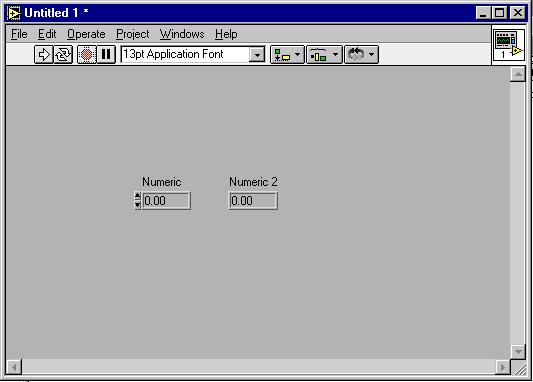 This is the second component within the Virtual Instrument. This is an important area where the underlying code goes into the program. Using the inputs and outputs, the program is created graphically. The users will be able to select “objects” from the functions window. 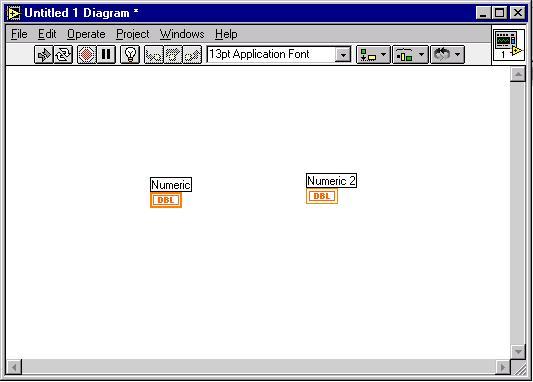 This menu has a lot of options and sub-options. To understand the available options, you can simply hover your mouse, and a description or help text of the option is displayed.

Virtual instruments, i.e., VI’s are modular and have a hierarchy approach. They can be used within top-level programs or subprograms. So, to consolidate, LabVIEW promotes modular programming. The entire application is divided into a series of subtasks and for each subtask, the user can have a VI. While executing the application, all the VI’s are processed and clubbed together so that the entire application is executed.

Using the above approach, the users will be able to set breakpoints and debug the flow to identify any known issues.

In this section of the article, we will discuss the common terminology that we use in conventional languages and compare it with LabVIEW terminology.

If there is an error identified in one of the SubVI then all of the subsequent SubVIs will not be processed or executed. Within the Error clusters, all the error handling conditions will be added to it and all the errors are automatically handled based on the conditions defined.

So within an error cluster, the developers will have an option to determine how a subVI is executed, especially when an error is encountered.

Using the error cluster controls and indicators, the developer can identify the error inputs and error output within a SubVI.

The following components are available within error inputs and error outputs of a SubVI.

In this section of the article, we will discuss the existing examples that are available within LabVIEW and understand the process of identifying the LabVIEW examples.

In most of the LabVIEW projects, the developers can find a working example and can customize it according to their needs. This feature is definitely a good option for developers who are new to LabVIEW and gives a provision for them to quickly learn and also utilize the tool in an effective manner.

With the use of NI Example Finder, the developers will be able to search for examples that are installed on their computers.

The following screenshot shows how a developer can actually look for existing examples.

The main use of these LabVIEW examples is to determine how LabVIEW can be used to perform a wide variety of tests including measurement, control, and design tasks.

Looking at the VI, the developer can actually customize according to their needs and work accordingly. This will save time and it is really beneficial for the developers who are new to the tool. 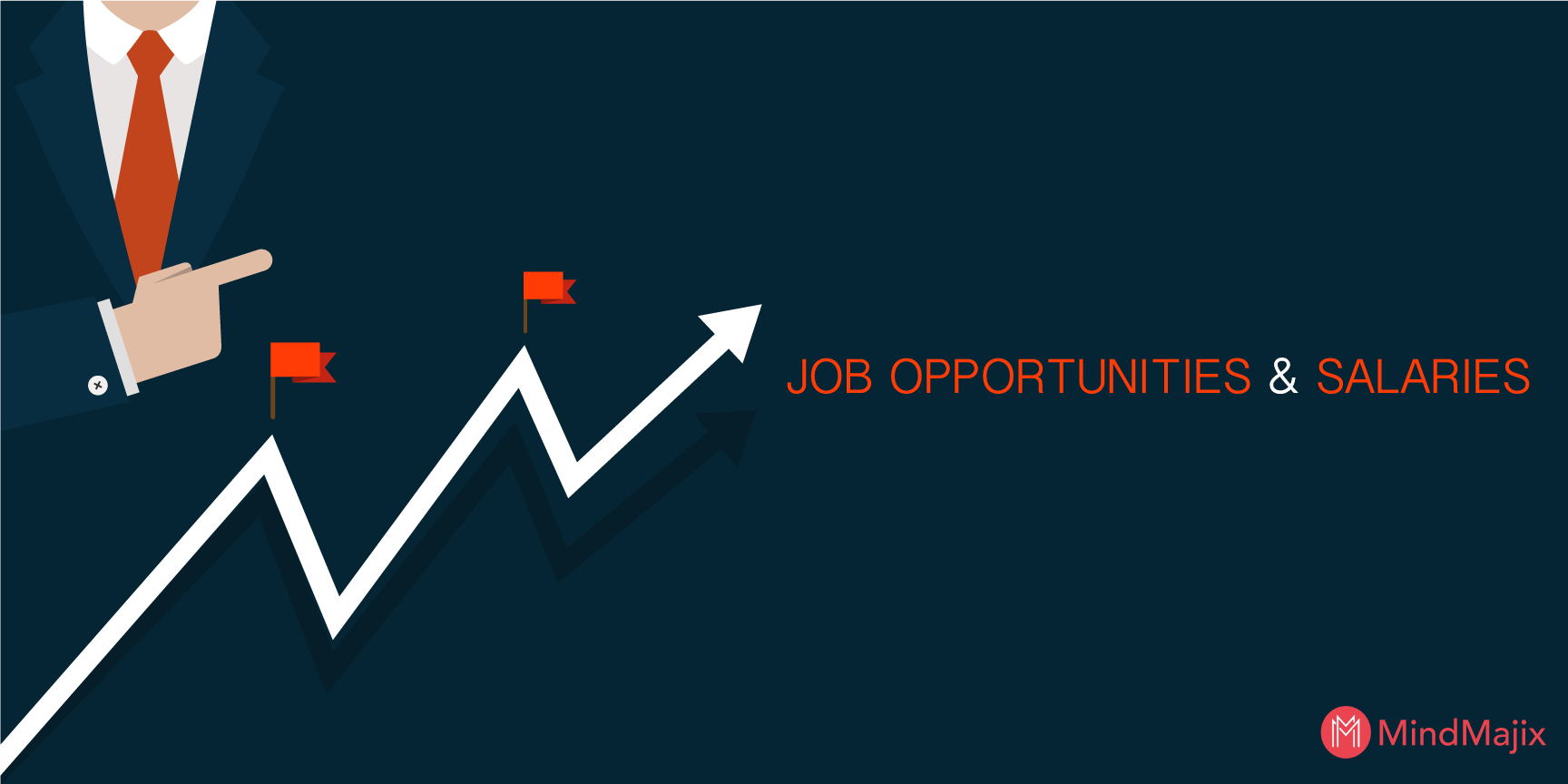 LabVIEW is a niche software where most companies have invested their time and energy to increase the overall productivity of the organization. There are a lot of job opportunities that are available in the current market where organizations do pay hefty salaries for experienced professionals in this area.

There are ample amount of opportunities all over the world for LabVIEW developers, and depending upon their experience and exposure to the tool, the salary will vary.

Typically, the salaries for LabVIEW developers start from $60k to $103K. The variation of the salaries completely depends upon the factors like employment location, company, and the experience of the individual.

LabVIEW is a powerful tool where most organizations who are into Industrial Automation, Engineering, Research & Development use this software to build prototypes and proof of concepts before building the final product.

A lot of Startups are actually using this software to build complex systems as it reduces the amount of development effort in total. Also, the use of LabVIEW software is predominant in the areas where hardware products are built based on embedded programming languages.

The demand for LabVIEW developers has always been high in the current market. Most of the companies are providing solutions in terms of Industrial automation and household automation. To support this movement, the organizations have to definitely use LabVIEW effectively. The demand for LabVIEW developers will be predominant even in the coming years.

With the use of conventional programming languages, the users can still automate the testing and also manage the data gathering, but the number of efforts that are put in to deliver this is also high when compared to LabVIEW. Using its user interface and graphical programming language, the execution can be achieved in a shorter duration of time without affecting the quality and productivity. Using this powerful tool will definitely help users to intelligently handle their data processing and data presentation.