Introduction of Repetition And Loops in LabVIEW

Loops and case statements of text-based programming languages are represented as structures in graphical programming. Repetition and loop are used to perform an action frequently with variations in the details each time. LabVIEW consists of FOR Loop and WHILE Loop. These loops are used to control repetitive operations. Structures on the block diagram are used to repeat blocks of code and to execute code conditionally or in a specific order. LabVIEW includes structures like the While Loop, For Loop, Case structure, Stacked Sequence structure, Flat Sequence structure, Event structure, and Formula Node. This chapter introduces the loops in LabVIEW, iterative data transfer in loops, and timing a loop along with functions commonly used with these structures, including the shift register and the Feedback Node.

A For Loop executes a subdiagram, a set number of times. Figure 4.1(a) shows a For Loop in LabVIEW and Figure 4.1(b) shows the flow chart equivalent of the For Loop functionality. The For Loop is located on the Functions>>Programming>>Structures Palette. Select the For Loop from the palette and use the cursor to drag a selection rectangle to create a new For Loop or around the section of the block diagram you want to repeat. You also can place a While Loop on the block diagram, right-click the border of the While Loop, and select Replace with For Loop from the shortcut menu to change a While Loop to a For Loop. 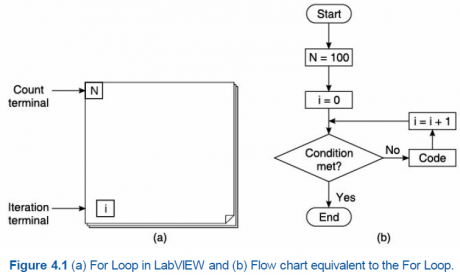 Example 1: Create a VI using For Loop which changes the color of a color box automatically for the given number of iterations as shown in Figure 4.3.

Solution: The front panel of this VI consists of a Numeric Control for providing number of iterations and a Framed Color Box for displaying various colors as shown in the figure. The framed Color Box indicator is located in Controls>>Modern>>Numeric palette.

In the block diagram the function RGB to Color is used to produce various colors based on the combination of values given to the red, green and blue terminals. The RGB to Color function is located in Functions>>Programming>>Numeric>>Conversion palette.

As given in the solution, the For Loop will execute for three iterations. The value of the iteration terminal added with 1 is given as input for one of the terminals of multiplication functions for each iteration. The iteration value is multiplied with 50, 100 and 150 for producing red, green and blue values respectively. These values are given to the RGB to Color function. This RGB to Color function produces three different colors based on the red, green and blue values. The produced colors are displayed in the framed Color Box indicator. The For Loop will execute only for three iterations since the number of iterations is set to 3. The number of iterations can be increased to produce more numbers of colors.

In LabVIEW, the WHILE Loop is located on the Functions>>Programming>>Structures palette. You also can place a For Loop on the block diagram, right-click the border of the For Loop, and select Replace with While Loop from the shortcut menu to change a For Loop to a While Loop. The While Loop contains two terminals, namely Conditional Terminal and Iteration Terminal. The Conditional Terminal is used to control the execution of the loop, whereas the Iteration Terminal is used to know the number of completed iterations.

Example 2: Create a VI to display the numbers 1 to 10 in a Numeric Indicator using a While Loop. Use the conditional terminal Stop if True as in Figure 4.8.