Overview Of Clusters In Labview

CLUSTERS group data elements of mixed types. An example of a cluster is the LABVIEW error cluster, which combines a Boolean value, a numeric value and a string. A cluster is similar to a record or a struct in text-based programming languages. The below Figure shows the error cluster control and the corresponding terminal created in the BLOCK DIAGRAM. This cluster consists of a Boolean control (status), a numeric control (code) and a string control (source). 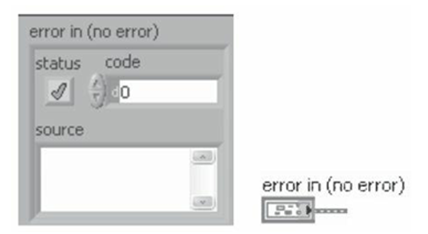 Most clusters on the block diagram have a pink wire pattern and data type terminal. Clusters of numeric values, sometimes referred to as points, have a brown wire pattern and data type terminal as shown in below Figure. You can wire brown numeric clusters to numeric functions, such as Add or Square Root, to perform the same operation simultaneously on all elements of the cluster.

Clusters group like or unlike components together. They are equivalent to a record in Pascal or a struct in ANSI C. Cluster components may be of different data types.
Examples

All elements of a cluster must be either controls or indicators. You cannot have a string control and a Boolean indicator. Think of clusters as grouping individual wires (data objects) together into a cable (cluster). The following is an example of a cluster used to store student information.

Description: Clusters group data elements of mixed types, such as a bundle of wires, as in a telephone cable, where each wire in the cable represents a different element of the cluster. A cluster is similar to a record or a struct in text-based programming languages. Bundling several data elements into clusters eliminates wire clutter on the BLOCK DIAGRAM and reduces the number of connector pane terminals that subVIs need. Like an ARRAY, a cluster is either a control or an indicator. A cluster cannot contain a mixture of controls and indicators.