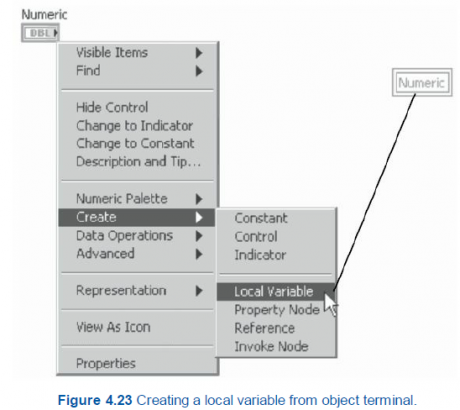 Global variables are built-in LabVIEW objects. You can use variables to access and pass data among several VIs that run simultaneously. A local variable shares data within a VI; a global variable also shares data, but it shares data with multiple VIs. For example, suppose you have two VIs running simultaneously. Each VI contains a While Loop and writes data points to a waveform chart. The first VI contains a Boolean control to terminate both VIs. You can use a global variable to terminate both loops with a single Boolean control as shown in Figure 4.25. If both loops were on a single block diagram within the same VI, you could use a local variable to terminate the loops.

Figure 4.26 shows a global variable front panel with a numeric, a string, and a cluster containing a digital and a Boolean control. The toolbar does not show the Run, Stop or related buttons as a normal front panel. 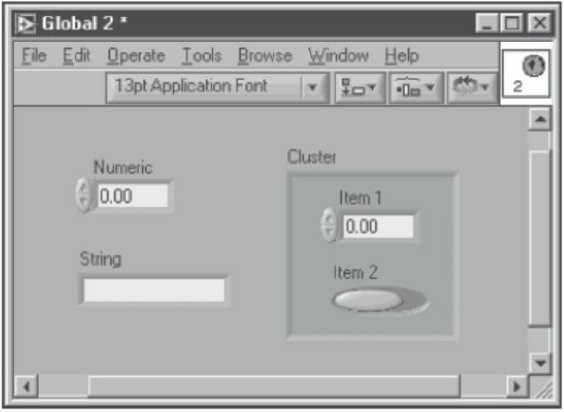 The two common problems that globals will cause in an application are race conditions and performance problems. These problems are pretty easy to diagnose and relatively easy to fix once you understand them. A race condition occurs when more than one piece of code needs to update a global and there is no way of ensuring that they take turns and leave the global in a valid state. The solution is to control the access and making the code take turns. The performance problem is that it is also possible to use globals in ways that greatly slow down your VI’s execution. This is very different from a race condition in that the program executes correctly, but it takes longer than it should to complete. There is a very good solution that will actually make the code easier to read at the same time it restores the performance. To speed this up, make a subVI that takes the parameters for indexing the global and returns the data. Local and global variables are advanced LabVIEW concepts. They are inherently not part of the LabVIEW dataflow execution model. Block diagrams can become difficult to read when you use local and global variables, so you should use them carefully.