In today’s world, graphs and charts are one of the most essential tools to represent data, and they are making trends in different aspects. They are widely used in various sectors to convey the information visually and to make sense of data.

A chart is a graphical representation of data in symbols whereas graphs portray the relationship between different data in less space.

Graphs and chart techniques are evolving with technological innovations. LabVIEW is a software development platform developed by National Instruments. LabVIEW is specially designed for scientists and engineers who need to program for graph and chart. 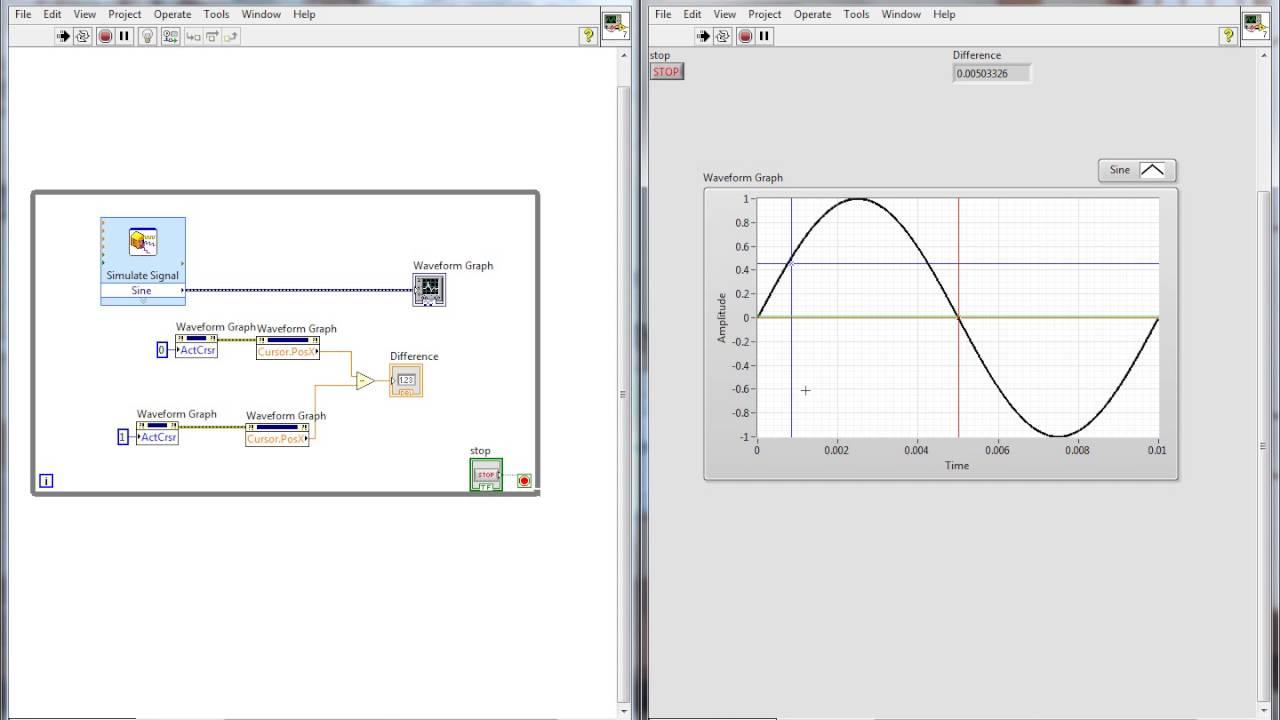 LabVIEW Programs Including Graphs and Charts

First of all, you have to understand the basic concepts of LabVIEW programming. Learn the fundamental steps to start programming LabVIEW interactive environment. Here is the best example to create a graph and chart program in LabVIEW.

Step 1: Launch LabVIEW platform. Open-File Menu and click on the ‘New’ option to build a new Virtual Instrument (VI). A VI has two windows; window comprising the front panel view with inputs and outputs and block diagram which contains the code.

For example, create a program for changing the temperature from Fahrenheit to Celsius and display them as a graph in LabVIEW.

Step 2: Right-click on the front panel - Navigate to Control Palette – Select Numeric type – Click on Vertical Slide Bar as shown in the image. 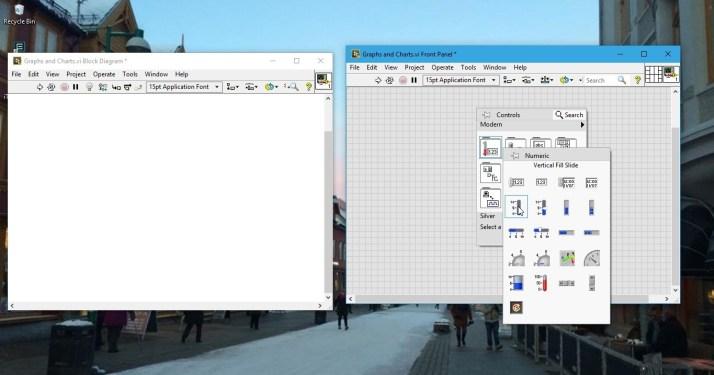 Step 3: Use the formula Tc=5/9(Tf-32) to convert temperature from Fahrenheit to Celsius Scale. This formula includes various operations in it.

So, connect the output of Temperature slider to the upper input of the subtraction block which is present in the function palette in the numeric section and set value 32 to another side of subtraction block.

Step 4: In the same section, select the division block and set numeric constant value 5 at the upper end whereas value 9 at the lower input.

Step 5: In multiplier block, connect the output from subtraction block and division block as shown in the below image. The multiply block gives the output of temperature value in Celsius. 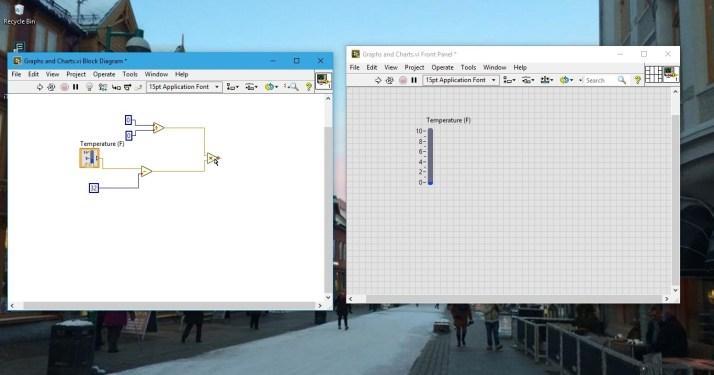 Step 6: Right-click on Front Panel – Select numeric from the control palette – Click on Thermometer. Connect thermometer with the output of the multiply block and name them. 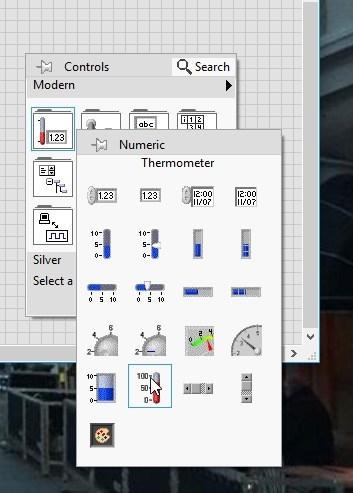 Step 8: You can change the scale of fill as follows: Select scale of fill – Right Click on Vertical Slide fill – Select Properties – Select Scale – Set Maximum value as per your need.

Step 9: Click on the Run button or Press (Ctrl+R) to run the program. Now, you have created only the bar graphs.

Step 10: Navigate to charts and graph section in LabVIEW. Select graphs from the control palette and choose Waveform Charts. Join the block diagram of the process with the result of the multiply block. Run the VI continuously and change the value of temperature in the Slide fill to see the change in variation of data in the chart as shown below. 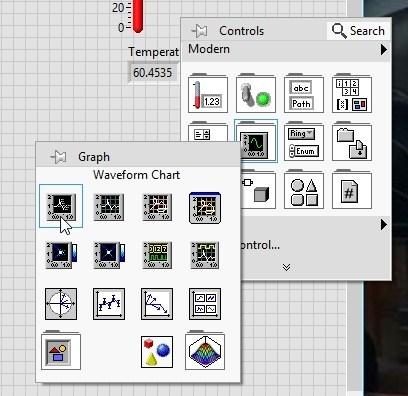 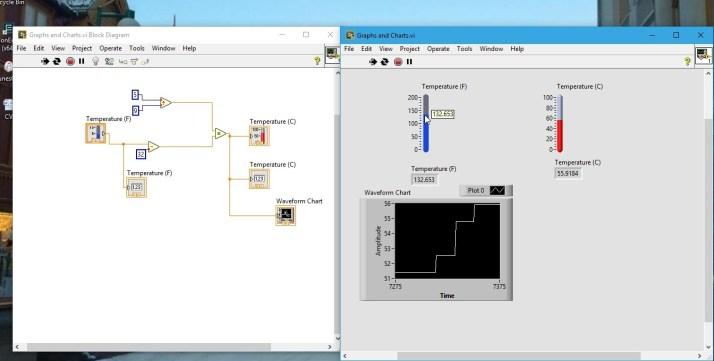 Step 11: Move to the graph section and set the data of any type about a period of time to see the graph. Make use of ‘for’ loop to iterate the value and insert the wait block in it. Connect a wire from output of the multiply block to the edge of ‘for’ loop. In the control palette portion, select waveform graphs as displayed in the below image. 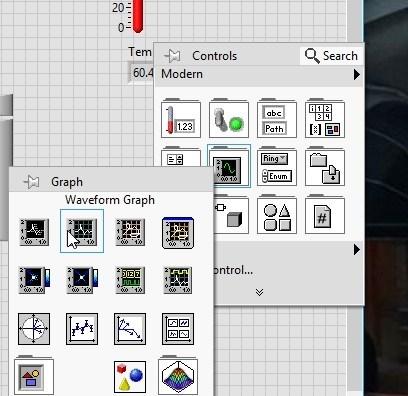 Step 12: Join the block of graphs to the edge of the loop as shown in the image. Then run the program as said above where you can see the variation in the chart and but nothing in graphs. When you stop the program of iteration gets completed you can view the data variations in the graph. 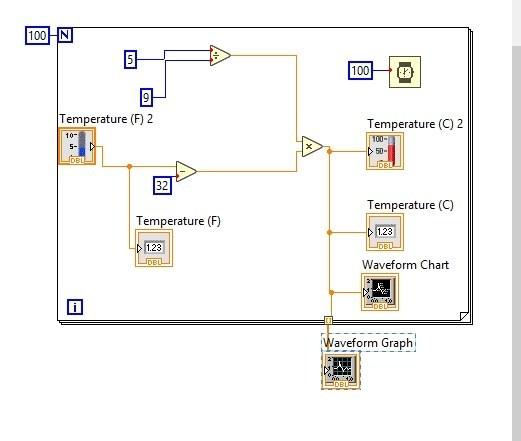 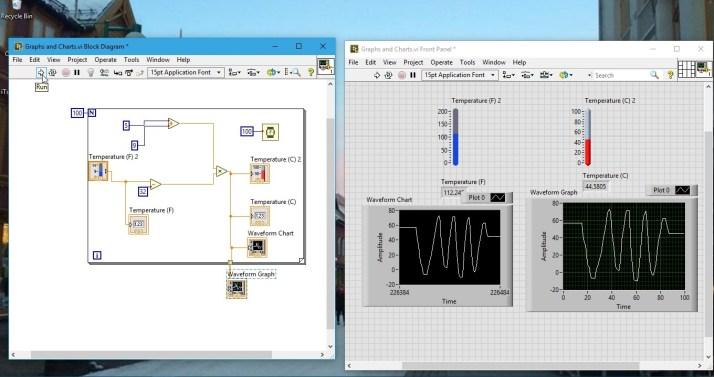 3D Graphs and Its Property

The LabVIEW environment enables the users to create graphs in 3D (Three Dimensional View) to represent the data visually. The professionals have to visualize data sets in three dimensions in real-time such as a motion of an airplane, time-frequency analysis, and temperature distribution on a surface and so on.

Learn and Enhance your Skill with LabView Training join Now!

The 3D graphs in LabVIEW are easy to use and customize based on the user requirements. Below image is an example of a 3D curve graph. The major properties of 3D graphs are 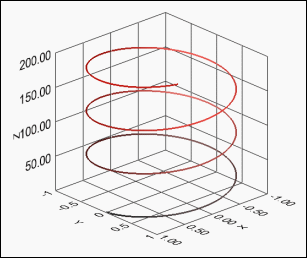 LabVIEW interactive environment offers different types of 3D graphs to represent the data in three dimensions, they are

Scatter – It is a kind of graph which includes two axes, each representing a set of data. 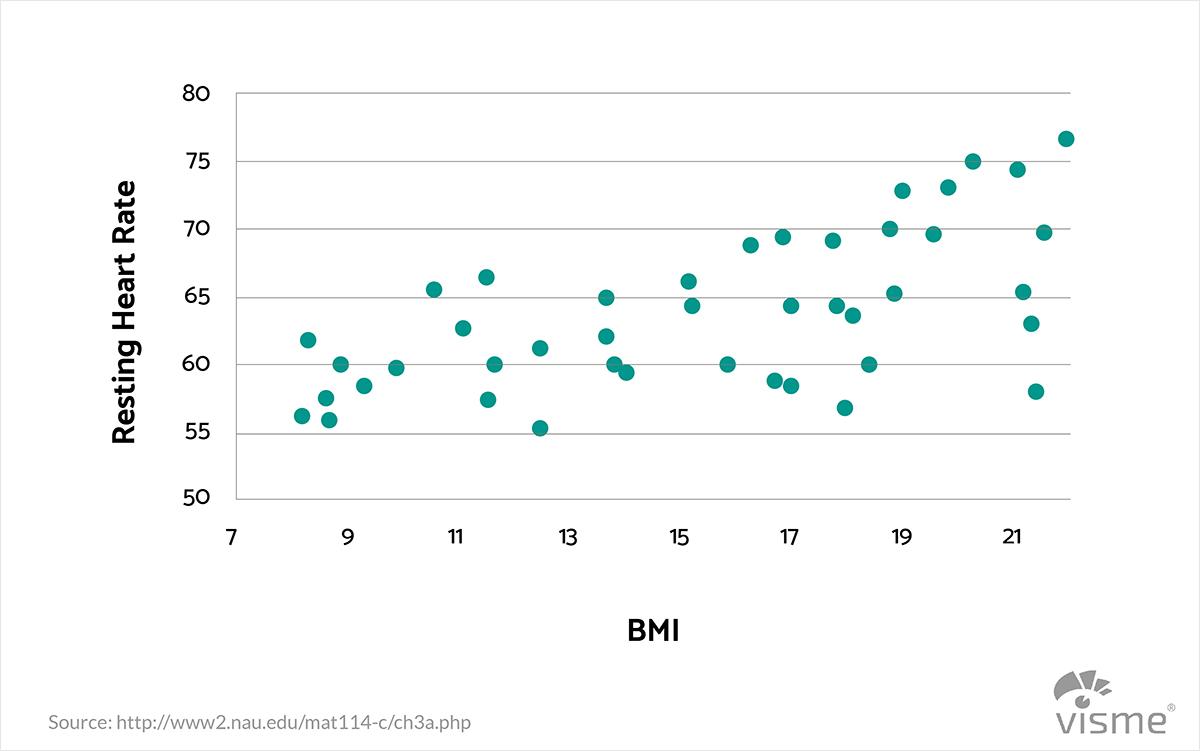 Stem – Plots the data Y as stems and it generated the x-axis automatically.

Comet – A circle traces the data point on the display in which the trailing segment follows the head. 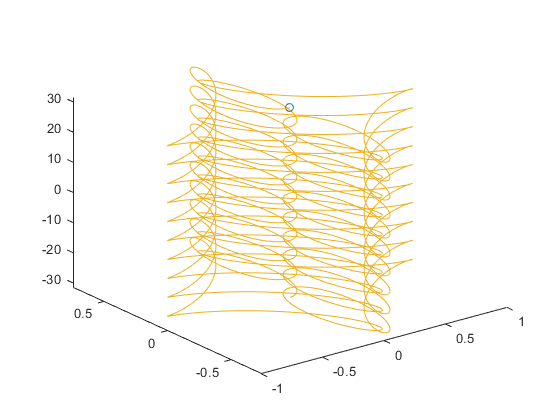 Contour – Used to analyze three variables in the two-dimensional format. 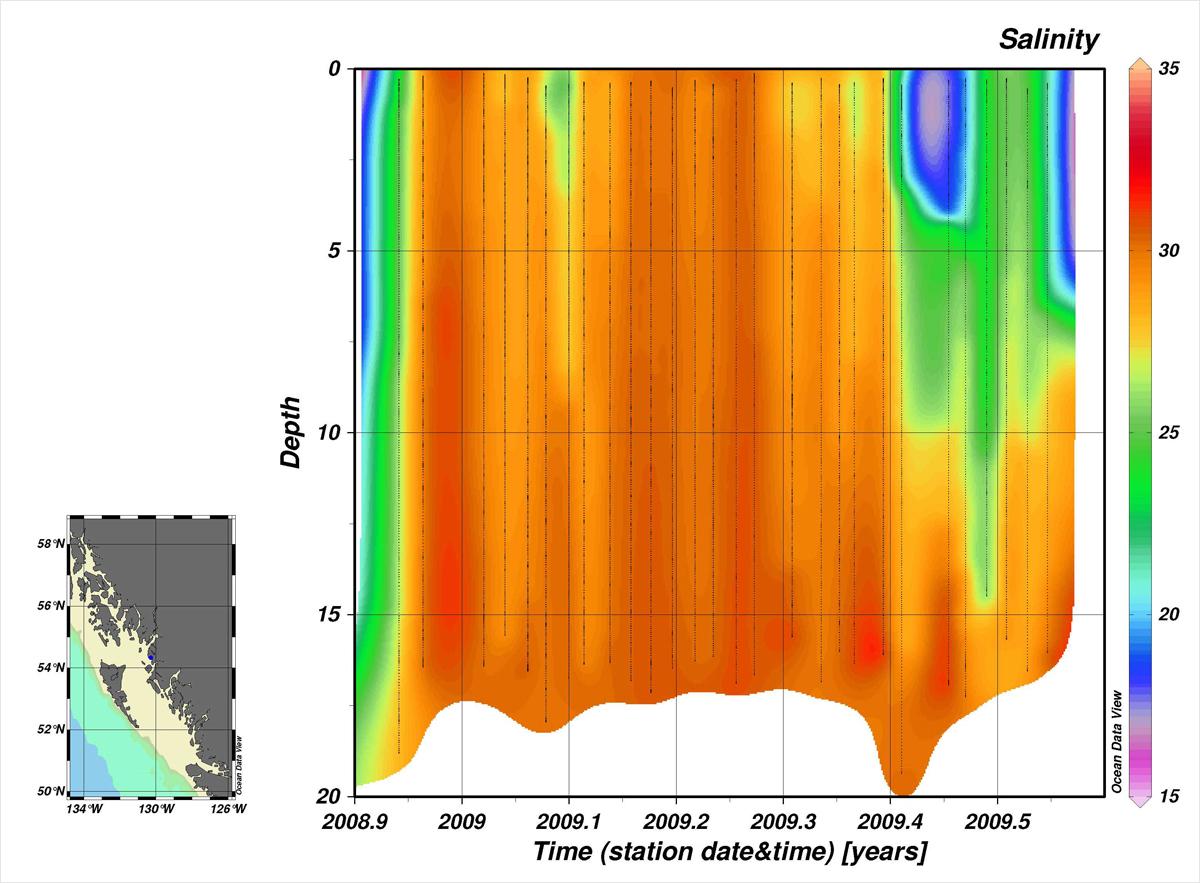 Mesh – Collection of vertices, edges, and faces to defines the shape of an object 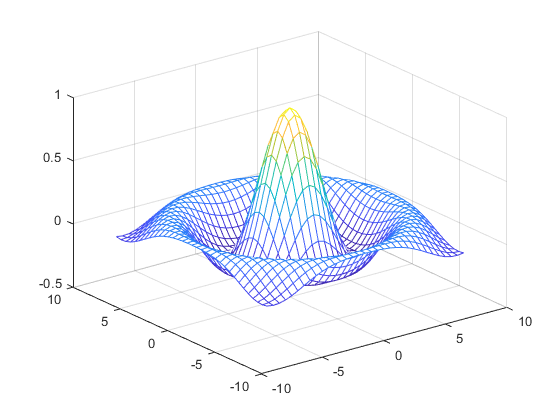 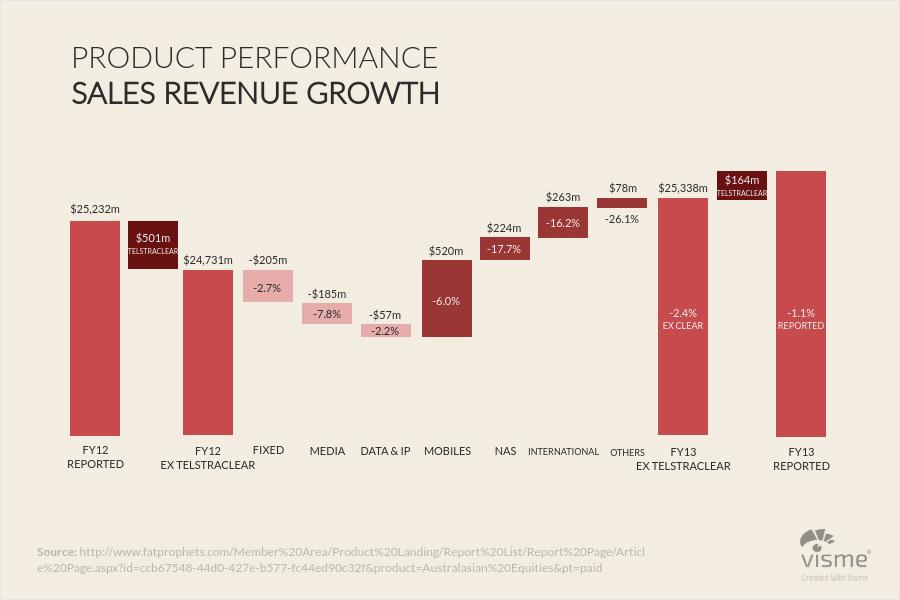 Quiver – Displays vectors with components (u,v,w) at the points (x,y,z) 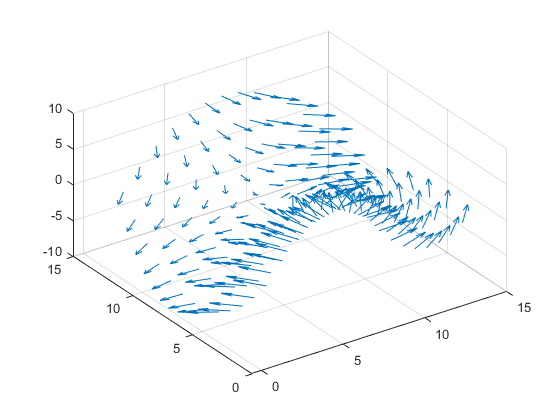 Ribbon – Appears to be coiled ribbons formed with smooth curves 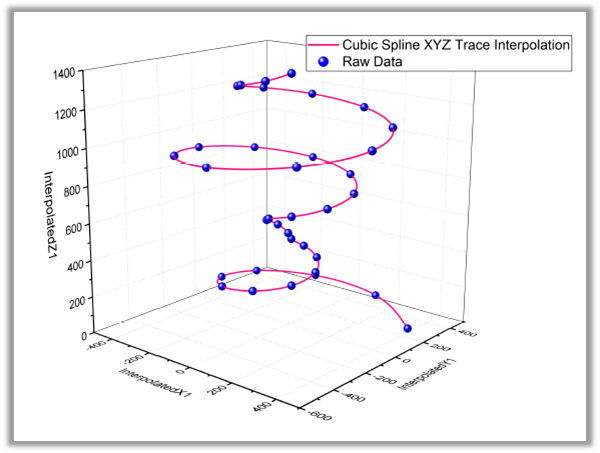 Bar – Used to visualize the data that contain different proportion in a single view. 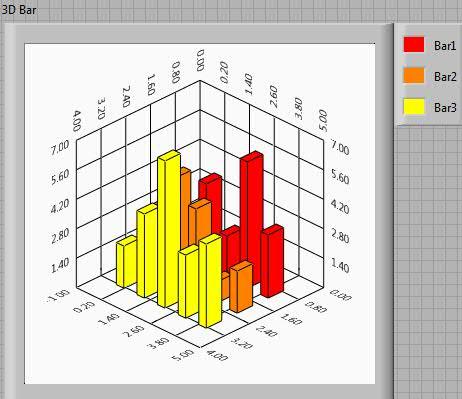 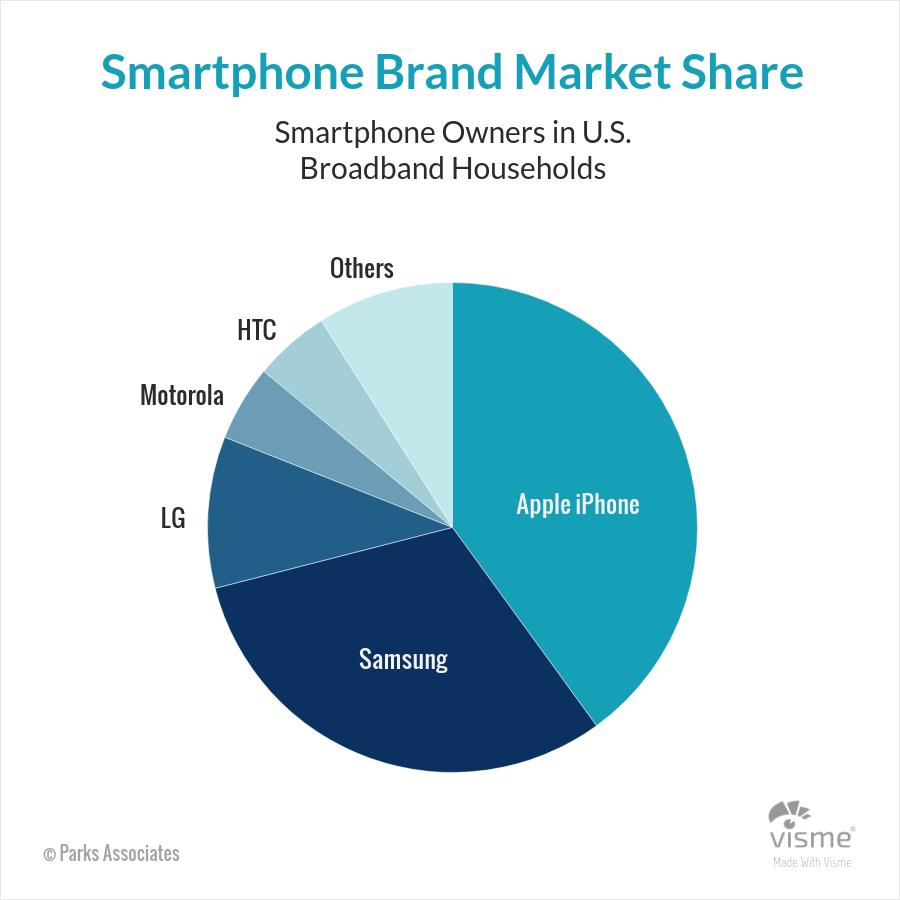 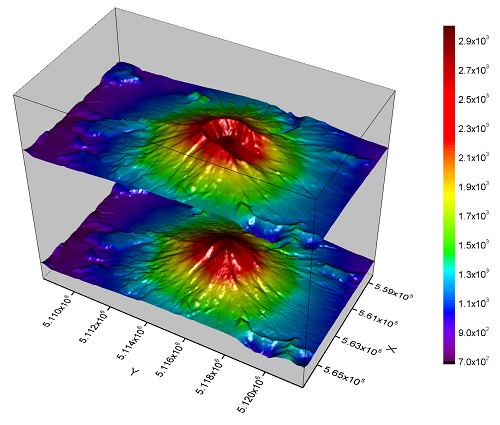 Type of Charts available in LabVIEW

The waveform charts in LabVIEW allows the user to display plots of the data in graphical form. Charts are useful for plotting the data interactively, appending new data to old in such a way to differentiate the current value with the previous data. The Waveform charts are capable of displaying one or more plots of data of constant rate.

If you produce the waveform chart with a single value simultaneously, the LabVIEW shows the data as points on the chart and increment the value. This chart is capable of accepting the waveform data type which transmits the data. You can make use of the analog function to outline time on the x-axis of the chart and provide the right interval between markers.

Intensity charts are a kind of waveform chart in which the Cartesian plane shifts to the right of the last block when you plot a block of data in it. You can able to see the new value of data on the right side of the old values. Like the waveform chart, this chart also maintains the history of data from the past updates.

It is a default mode which displays data scrolling from left to right continuously. Here the old data is shown on the left and new one on the right side.

This mode of the chart is similar to the function of the oscilloscope in which the sport runs from the left side of the window to right. The image gets cleared and the spot appears on the left when it reaches the right end.

In sweep chart mode the data is overwritten as you see in the ECG image. New data appears on the left which is separated from the right by a red vertical line.

Thus, these are the essential concepts that you need to know in the Graphs and Charts of LabVIEW. Make use of this tutorial to create effective programs for your data and represent them in a visual manner.