The two main parts of the SAP HANA server system are the hardware and the software. On the client-side, SAP provides the SAP HANA Studio which allows application modeling.

For data reporting on an SAP HANA system, SAP’s BusinessObjects software can connect natively to SAP HANA, and reporting can be done in any other program that can create and consume MDX queries (such as Microsoft Excel pivot tables), which SAP HANA supports natively.

This post will not go into any detail regarding the reporting software on top of SAP HANA, except to show simple Excel integration—the topic of reporting is too vast for the scope of this book, and it is covered more than adequately elsewhere.

The following diagram is an overview (provided by SAP) of the SAP HANA system architecture, showing clearly the different components and integration between them: 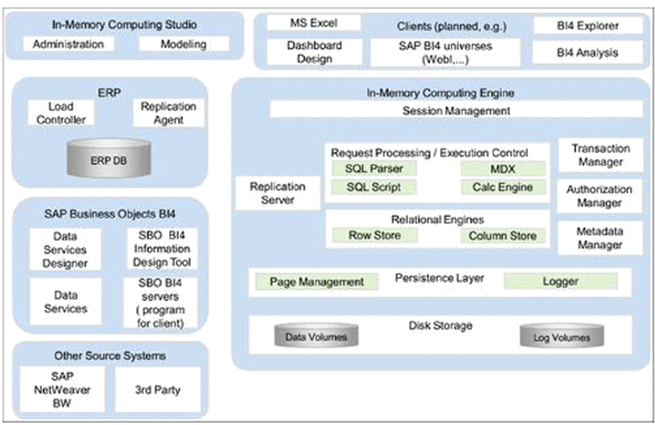 The SAP HANA box itself is a massively multi-core, multi-CPU server, with a great deal of memory—up to several terabytes. For example, on May 16, 2012, IBM announced that in collaboration with SAP, they had built a machine with 100 TB of main memory. At the time, SAP indicated that this machine would be sufficient to run the eight largest clients of SAP ERP—all at the same time!

One of the main strong points of SAP HANA is its ability to process data in parallel, cutting the initial (large) amount of data into small chunks, and then giving each chunk to a separate CPU to work on—hence the need for a large number of CPU cores.

One other aspect of the system is that wherever possible, data is kept in memory, in order to speed up access time. Where a traditional database system might set aside a gigabyte or two of memory as a cache, SAP HANA takes this to the next level, using nearly all the server’s memory for the data, making access times nearly instantaneous.

The database software powering SAP HANA is what’s known as a column-based RDBMS, and is a logical evolution of the following three existing technologies that were already in use at SAP:

By combining these three proven technologies, SAP has managed to produce a coherent, persistent in-memory database system, known internally as NewDB (which says a lot about how the technology is viewed from inside SAP!).

In any given database, tables such as the following table exist:

Whereas, a traditional database system will store the data in a row-based format, as shown as follows:

A column-based RDBMS will store each column together, as shown as follows: 1,2,3

A column-based database will be able to more quickly scan a column of data than a row-based system. This point is especially important for data reporting (like SAP BW), and enables results to be given to the user much more quickly.

Another important aspect of a column-based RDBMS is data compression. Since all values in a column are stored together, there is the possibility of storing the value only once, alongside the number of occurrences. So in the example table, we’ve just seen, the last column might be stored as follows:

This might not seem important, but in a table that contains several million lines, the space savings are potentially huge. SAP indicates that data can be compressed to between 10 percent and 25 percent of its original size. Of course, this means fewer data to scan through for the system—and since data is in memory, it means more data—between 4 and 10 times—can be kept in memory at once.

The full list of different strong points and weaknesses of column-based versus row-based database systems is beyond the scope of this book. Several interesting comparisons exist, and a good page to start would be the Wikipedia page concerning column-based RDBMSs, whose URL is given in the People and places you should get to know section.

In this section we’ve taken a look at the business need behind the SAP HANA product, the history of the software SAP HANA inherits from, the basic system architecture that makes up the product, as well as a fast overview of the column-based database concept.

In the next section, we’ll take a look at what you need to get SAP HANA Studio up and running on your computer so that you can start developing your first SAP HANA application.