When implementing SAP BW Powered by SAP HANA, customers need to consider some specific configurations. For example, they need to understand what software elements need to be run on dedicated hardware and when they can combine scenarios. SAP recommends that each system utilize dedicated hardware. This is specifically important in Productive environments.

Systems that fall into the DEV/SANDBOX/TRAIN groups  are  those that tend to have lighter workloads. The most common question that SAP receives is whether multiple existing systems can be consolidated into a single physical system to minimize hardware/system costs. As stated above, SAP still recommends that customers utilize the separate hardware for each system. Nevertheless, customers have frequently combined SAP SIDs on one server. Customers are technically able to put multiple SIDs on a single SAP HANA appliance. The challenge in this scenario revolves around the software lifecycle and system management. If the SAP HANA system has to be restarted, then all systems that utilize that appliance will be affected. Further, if a process runs away for one SID, then the other connected systems will slow down dramatically or even stop. To avoid this problem, SAP support generally recommends separating the systems.

The Quality Assurance and test systems usually perform multiple functions  in a project. Besides the QA/consolidation functions that are the purpose of the system, customers often will utilize this hardware as a load-testing environment. The configuration will be similar to a production system so that load testing will produce representative results for the live production hardware. In some cases, this hardware is specified as fail-over equipment for production. In this configuration, both the SAP BW system and the SAP HANA system have to be considered. SAP recommends that ONLY  ONE  system be running actively on both the SAP Application and the SAP HANA system.

Customers  often will configure  servers  in non-productive  systems  to  make maximum use of the  hardware. In production, the  focus  should not     be  on maximum use of resources, but, rather, on system performance for the business. Based on this foundation, production application servers should be dedicated, and they should have more-than-sufficient resources to support business operations. Customers utilize their hardware vendor’s SAP competency center to determine the appropriate configuration. The SAP HANA appliance can be more complex.

SAP HANA was originally released as a data mart platform. When SAP  made SAP HANA support available for SAP BW, it released an SAP HANA Database Only Edition specifically for the BW system. From a licensing perspective, this system supports SAP BW only as a use type. From  a  technical perspective, it is possible to run other scenarios on the same SAP HANA appliance that is the database instance for SAP BW. However, SAP has limited this combination use (license permitting) to a single application and a single data mart. The application can be SAP BW, SAP ERP, or SAP BUSINESS SUITE applications.

Performance — When customers utilize SAP HANA, they select the amounts of CPU and memory that provide the maximum system performance for their business. When operations are run against the SAP HANA appliance, the system uses as many resources as  possible  to return the best performance. This scenario could cause other processes to become very slow or to stop completely and wait for resources to become available before they continue. This delay could cause unpredictable performance behavior within the system.

Lifecycle Management — The other major production issue is software lifecycle management. Applications as well as the SAP HANA  system have to be updated, patched, or restarted at various points in the process. If one application needs to be patched that requires a SAP  HANA system restart, then all of the connected systems will be affected, even those that are operating effiectively. If a system restore was required, then all schemas in the databases would be restored, even if only one schema restore was necessary. This limitation could result in unplanned data loss. 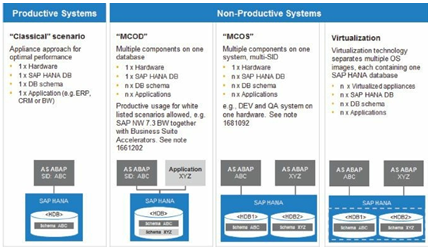 Implementation teams from SAP and partners will help design and guide the optimal landscape design based on customer input. Their recommendations will provide a system layout that will generate the performance, the business requires.