The Basics about Swift

Advantages of using Swift for Native Development for iOS

The basic concept of a brand new programming language, Swift, came from the Senior Director of Apple's expertise, Chris Lattner. The development of Swift began sometime in 2010.

The team behind the creation and development of Swift didn't solve strategic questions regarding how a new programming language would come into existence. Moreover, how would Swift integrate into the entire ecosystem of Objective-C? Initially, it did seem like Apple was forcing all iOS developers to migrate to an entirely new language.

Swift did disrupt the community, but it also did make the community better than ever. Later, the company made a decision to invest in Objective-C while communicating toward the overall development of a safe programming language.

The following year, developers at Apple laid their hands on a beta version of a completely new language. According to Apple's CEO Tim Cook, the new language post, its general release was also an integral part of the Xcode in the first month. By the looks of it, the language was downloaded more than 11 million times.

Developers were reportedly delighted with its flexibility, features, simplicity, and comprehensiveness. Swift was a little early when it came into production, but things worked out great. The language evolved significantly. In addition to this, substantial changes were introduced with each new release. Swift ultimately became one of the most-loved technologies in the world.

So far, Swift is the only thing that came from the Cupertino giant's brilliance but is not end-to-end. The programming language depicts Apple's engineering culture's very essence and features diverse contributions from an open-source community. The programming language offers all-around performance, and at the same time, the language is wholly designed to push development without any compromise.

One of the essential features of Swift is that the language is exponentially friendly for all kinds of programmers, new or the ones with extensive experience. Further, Apple made sure that the programming language offers industrial quality language, both enjoyable and expressive.

Swift came into being with one goal: to provide vital optimization to get the most from modern-day hardware. Both syntax and the standard library in Swift are curated based on a single-most guiding principle that provides an obvious way for writing codes.

Further, these codes make the platform its best. Swift strategically unifies speed and safety, making it quite a crucial choice from saying 'Hello World' to managing an operating system.

Furthermore, Swift also amalgamates a powerful type of inference and pattern with a touch of lightweight. This modernized syntax allows complex ideas that are expressed concisely and clearly. It results in a code that is seamless to write, and at the same time, it is easy to read and maintain.

Swift took quite some time to come into existence. Over time, the programming language has seen tremendous evolution, and it did also receive incredibly new features and capabilities. The goals of Swift are quite ambitious, and Apple is expecting developers and programmers to curate cutting-edge applications with Swift.

The Basics of Swift

Swift is an essential programming language that came into being for seamless curation of apps for macOS, iOS, tvOS, and watchOS. However, significant segments of Swift are too familiar as it shares a similar experience in curating both C and Objective-C.

However, Swift also provides its distinctive version of both fundamental C as well as Objective-C types. For instance, it includes the command 'int' for integers, 'Double' and 'Float' represent floating-point values, then comes the 'Bool' for the Boolean values and lastly 'String' for any textual data.

Moreover, Swift also provides increasingly consequential types of the three most straightforward types of the collection - Set, Array, and Dictionary, which can be found in Collection Types.

Similarly, like C, the Swift programming language also subtly uses the variable for both storing and referring values by just identifying names. By making insurmountable use of these said variables, values cannot be altered.

Also, certain constants showcase much more power than the overall constants in the programming language C. These constants are generally seen throughout Swift to make coding safe and transparent, which integrates work alongside values that don't change its value.

Other than the familiar types, the programming language also comprises the advanced types, which are generally not found in the Objective-C-like tuples. Here, tuples are the functions that create and pass around several groupings values. Using tuple, you can return to several values right from a function to a single-most compound value.

Swift also features optional types that can handle even if any said value is absent. With optional, Swift points out that if there is any value, then it ultimately equals 'X,' which further suggests that there's not any value at all.

Also, using options is quite similar to using 'nil' alongside pointers in Objective-C. However, they do work for any category, and not only with classes. Options are incredibly safe and quite expressive compared to the 'nil' pointers embedded in the core of Objective-C. At heart, optional empower Swift with its incredible features.

It indicates that Swift is an entirely type-safe programming language that also suggests the programming language aids in clearing the values of the type that allow code to work. For instance, if your code would require any 'string,' then the type safety of Swift will indefinitely prevent from passing up the 'int' through sheer mistake.

Similarly, type safety also prevents the programmers from passing on an optional 'string' to the code piece, which requires a non-optional string.' The type feature in Swift allows programmers to catch and fix errors at the earliest during the development process.

The core libraries in Swift provide a higher level of functionality irrespective of the standard library. The libraries also provide powerful tools which the developer depends upon among different platforms which the programming language supports. Core libraries' ultimate goal is to provide steady as well as advantageous features in the crucial areas:

The libraries are witnessing development even at the time of writing. Moreover, the work is being done to the libraries to give Swift the ability to support cross-platform integration. Upgrades of the libraries make it an integral part of the open-source release to ensure that community members will support the language.

It is a taxing undertaking to write code that provides all kinds of functionalities from the bottom. Hence, Swift is available in bootstrap to take advantage of the fantastic work that people as a community are putting into since the day of its inception. Reusing API alongside implementation is much likely possible because of three prevailing libraries in Swift, such as 'libdispatch,' 'Foundation,' and XCTest.

Advantages of using Swift for Native Development for IOS

Swift prides itself on combining all compiled languages' overall efficiency and performance with interactivity and simplicity concerning popular programming languages. Let's dig into the business perspective of Swift:

It is an immaculate language featuring utterly simple grammar and syntax. It is easy to read as well as write Swift. The concise nature of Swift also suggests that there's less for codes to complete the task. Additionally, ARC or Automatic Reference Counting takes care of managing and tracking the memory usage of the app. Here, developers are not required to spend both effort and time not doing anything manually. 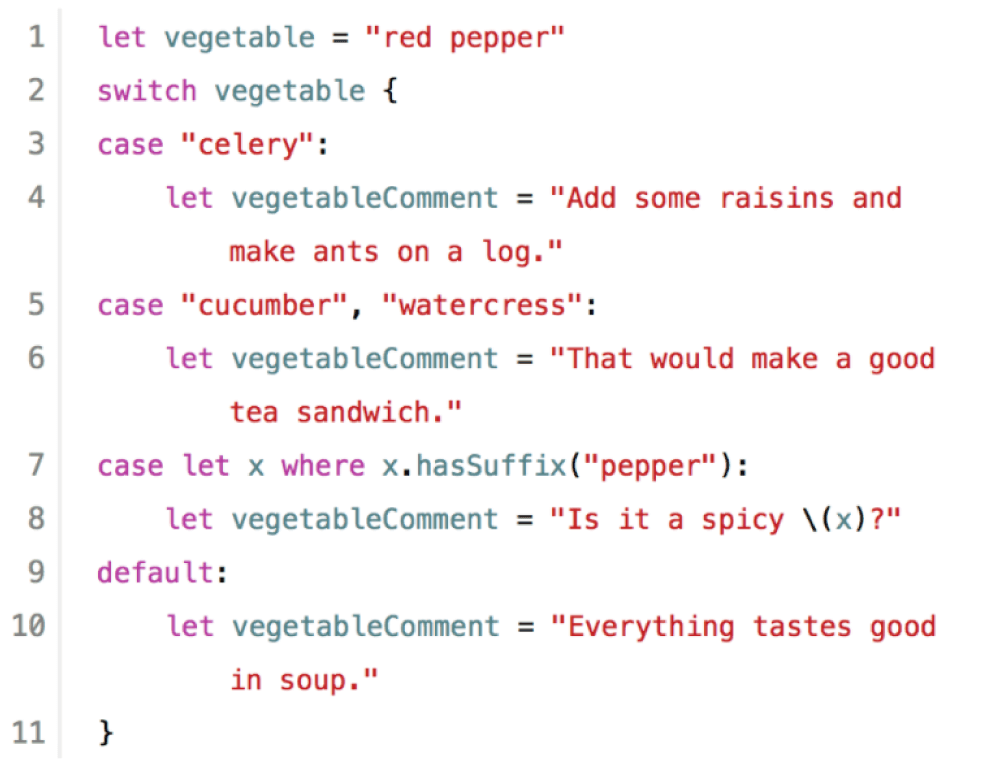 Lyft application is the perfect example of Swift's feat. Moreover, the company completely rewrote the entire app. The old codebase comprises 75,000 lines, whereas the new version made from Swift did create the functionality by incorporating significantly less than a third of the codes.

In addition to this, the app also comprises an onboarding process. The old app took a month with several multiple engineers for implement. On the other hand, the new Swift app was completed a week with only a single engineer. 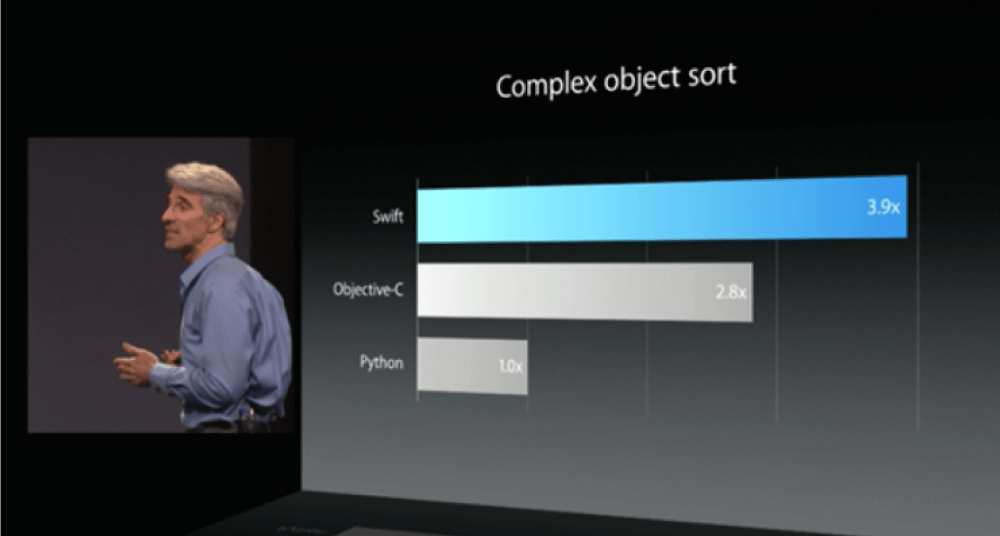 The other of Swift's strengths is safety. The language comes with a strong system for typing, and the error handling prevents errors and code crashes that are into production. Moreover, Swift also features a short loop for feedback that allows you to see the mistakes instantly in the code and then fix them in the blink of an eye.

It reduces both the effort and time necessary to fix bugs and eliminates all of the risks of deploying low-quality code.

At the time of building apps, programmers generally use significant third-party code as they are reusable and open-source libraries and frameworks compiled directly into the application's code. The libraries can be seemingly dynamic and static; Swift was the first-ever programming language that introduced dynamic libraries now to iOS when it came into being.

Static libraries are often found embedded into code when they are compiled. Later, it becomes an essential segment of the executable file. It also increases the overall size alongside the load time. They can't be updated automatically as they're completely stuck in the version that is compiled.

On the other hand, the dynamic libraries exist right outside the code, and they will be uploaded when necessary. Static libraries also require to have copies in the program's files while dynamic ones need only one.

Given that it takes a significant amount of time to reach out for the dynamic code right from the outside rather than calling it in, programmers have the choice to pertain using static libraries. So far, this has helped them put certain apps into isolation that is not meant to be shared.

Even since Apple released Version 5.0, the standard Swift libraries are entirely integrated into macOS, tvOS, iOS, and lastly, watchOS. Further, this also indicates that any built platforms will be significantly smaller as there will be several libraries included. Swift has a stable, advanced application binary interface or ABI, which also allows Apple to support the programming language Swift across all of its Operating Systems.

IBM did propose an idea to pull off the initiative of putting the programming language in a cloud, and the feat is a great success already. Swift can integrate with any most sought-after back-end technologies. Like it happens in the development of full-stack Javascript, utilizing Swift on the front-end and back-end allows sharing the extensive code and its reuse.

Apple provides optimum support to all of its devices such as MacBooks, Mac, iPads, iPhones, Apple Watch, and Apple TV. In addition to this, Swift also adds support not only for Linux but also for Windows; well, it's an open-source programming language, after all.

Open-source is a critical element for making Swift reach the potential that Craig Federighi, Software Engineering VP, Apple, first had in mind. Moreover, the only way Swift will become the most significant language for the next couple of decades of programming in the ever-growing industry.

Over time, Swift has become aesthetically mature language updates after updates. Swift is going to witness adoption as it continues to grow and become mainstream.