An Extensive Guide on Alteryx Macro

Using macros in Alteryx may be daunting, particularly if you are new to the program. However, as you go through your Alteryx adventure, you may discover that you need certain kinds of macros to accomplish specific tasks. Beyond the fact that Alteryx Macros are sometimes required, they may also save you a significant amount of time and provide an alternative solution to problems. Standard Macros are the most basic of the four types of macros. But first, let us define what a macro is and what applications it may be used for in the first place.

What is a macro?

In general, Alteryx Macros are a way of condensing a process into a single tool, which we can then reuse in other workflows to save time. In layman's words, macros are workflows that you can store as a tool and reuse again and over again, saving you the time and effort of creating the same process over and over again. It is possible that you're more acquainted with macros than you realize!
Types of Alteryx Macro

There are basically 3 types of Alteryx Macro-

It is the goal of this macro to package a process in a workflow as a tool that can be used to insert it into another workflow. After each run, this macro is repeated many times in a workflow, and an output is generated after each run. The macro is executed once for each record or chosen group of records in the data set being processed.

A Batch macro is a workflow macro that runs numerous times and generates an output after each run. The macro is run once in a processed data collection for every record (or for a defined subset of records. Inputs may be set to be utilized in each run of the process, or just in certain runs, depending on the configuration.

If a condition is fulfilled, an Iterative Macro will run all records and loop the records back into the workflow and repeat the whole process as often as desired, or until the condition has been satisfied.

How to create an Alteryx Macro?

Changing postcodes to latitude and longitude coordinates is something you may have done many times at the data school, so it would be convenient to have it all in one place as a single tool. Any job that has to be repeated over and over again begs to be turned into a macro. So here's how you go about it.

Changing postcodes to latitude and longitude coordinates is something you may have done many times at the data school, so it would be convenient to have it all in one place as a single tool. Any job that has to be repeated over and over again begs to be turned into a macro. So here's how you go about it.

Step 1- Make sure that the input only contains the information that you wish to modify every time the macro is executed. For example- “api.postcodes.io/postcodes/sw99qu".In contrast, the root portion of this URL: "api.postcodes.io/postcodes/" stays constant at all times. As a result, we break apart the URL and make the initial text input be simply the postcode, and then connect it to the root in a formula tool in the following manner.

Step 2- We are now going to make it a macro. Simply right-click on the text input and choose Convert To Macro Input from the drop-down menu, as shown below.

Obviously, if the first tool is not a text input tool, this will be impossible to do. Simply choose the Macro Input tool from the Interface tab of the Tool Palette and drag it to the front of your workflow to begin using it. This may be set to handle with either text input or a file input depending on the situation.

Step 3 - If your macro has many inputs and the incoming data is likely to fluctuate, you can select the option labeled Show Field Map before running the macro. Here, the user is prompted to choose which fields in the process are associated with which fields in the macro. In the case of a single input (such as a postcode), this option can be left unchecked. 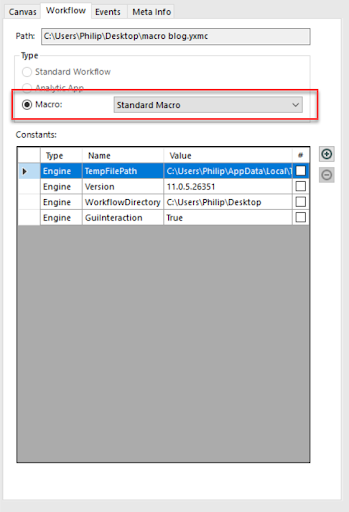 Step 4- Click on the canvas and go to the Workflow pane to confirm that you now have a macro created. You should be able to see that the workflow is a Standard Macro, which is what you want. Add a Macro Output tool at the conclusion of your process to get the results you want.

Step 5- The next step is very essential. Add a customized icon to your macro using the Interface Designer (Ctrl + Alt + D) on your computer.

Step 6- Remember to save your new macro with the.yxmc file extension so that it can be found later. Then, create a new workflow and insert a macro by right-clicking it. 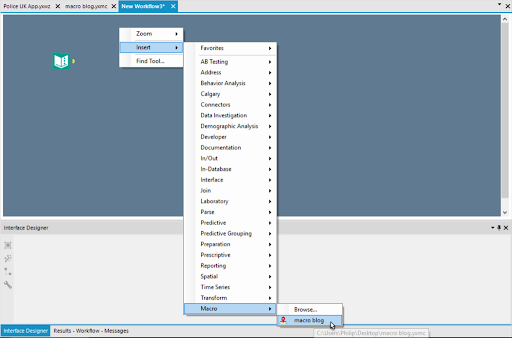 Step 7- That's all there is to it in terms of instructions. It is necessary to change this in order to be able to execute this macro on a list of postcodes that you want to convert to latitude and longitude coordinates.

What role alteryx macros have in the corporate world?

It is possible to think of it as a module that can be maintained separately from the core libraries since it is a series of functions that operate linearly on your data. Alteryx Macros makes use of macros inside the workflow to avoid having to rerun the analytic process each time the workflow is invoked. They are beneficial to our companies since they allow us to reuse processes, maintain a single point of contact, and divide duties.

With workflow, you can save the analytical process as a macro, which you can then run repeatedly. You can design a workflow, run it to ensure that the process is working, and then realize that you have to run it every week with a slight variation in the data input. You can also apply different calculations to the data when processing it. The reformation macro, which is followed by a new set of computations, may be used to build a unique workflow for each analysis.

Maintenance is handled by a single point of contact

This job broadens the scope of the scenario to include a workflow with different groups of sections and tools, allowing each individual to focus on a particular piece of analysis before bringing everything together for the final workflow. Whenever a workflow is going to be developed by a group of individuals, it may be beneficial to break it down into jobs that each person can work on their own.

Alteryx Macro may reduce the amount of time we spend manually entering data into Excel sheets and also convert data into more usable levels for analysis and reporting. Using Alteryx, you can do a wide range of tasks, including predictive modeling to generate visualizations, developing analytical apps, and extracting reports. Since we can create logic that may be reused across different processes, it significantly lowers the amount of time spent developing new features.