Now that we’ve covered the mechanics behind Git branches, we can discuss the practical impact that they have on the software development process. Instead of introducing new commands, this module covers how the typical Git user applies this workflow to real projects, as well as some of the problems that arise in a branched environment.

To Git, a branch is a branch, but it’s often useful to assign special meaning to different branches. For example, we’ve been using master as the stable branch for our example project, and we’ve also used a temporary branch to add some CSS formatting. Temporary branches like the latter are called topic branches because they exist to develop a certain topic, then they are deleted. We’ll work with two types of topic branches later in this module.

Amid our exploration of Git branches, we’ll also discover that some merges cannot be “fast-forwarded.” When the history of two branches diverges, a dedicated commit is required to combine the branches. This situation may also give rise to a merge conflict, which must be manually resolved before anything can be committed to the repository.

Let’s start by checking out the crazy branch.

The crazy branch is a longer-running type of topic branch called a feature branch. This is fitting, as it was created with the intention of developing a specific feature. It’s also a term that makes Git’s contribution to the development workflow readily apparent: branches enable you to focus on developing one clearly defined feature at a time.

This brings us to my rule-of-thumb for using Git branches:

Following these simple guidelines will have a dramatic impact on your programming efficiency.

Note that the CSS formatting we merged into master is nowhere to be found. This presents a bit of a problem if we want our experiment to reflect these updates. Conveniently, Git lets us merge changes into any branch (not just the master branch). So, we can pull the updates in with the familiar git merge command. Remember that merging only affects the checked-out branch.

As of Git 1.7.10, this will open your editor and prompt you for a message explaining why the commit was necessary. You can use the default Merge branch ‘master’ into crazy. When you save and close the file, you’ll notice an extra commit in your project history. Recall that our first merge didn’t add any new commits; it just “fast-forwarded” the tip of the master branch. This was not the case for our new merge, which is shown below. 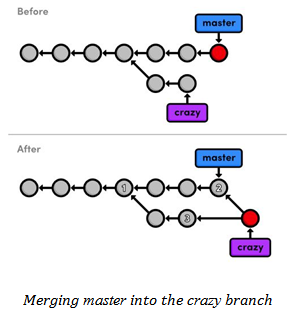 Take a moment to examine why the current merge couldn’t be a fast-forward one. How could Git have walked the crazy pointer over to the tip of the master branch? It’s not possible without backtracking, which kind of defeats the idea of “fast-forwarding.” We’re left with a new way to combine branches: the 3-way merge.

A 3-way merge occurs when you try to merge two branches whose history has diverged. It creates an extra merge commit to function as a link between the two branches. As a result, it has two parent commits. The above figure visualizes this with two arrows originating from the tip of crazy. It’s like saying “this commit comes from both the crazy branch and from master.” After the merge, the crazy branch has access to both its history and the master history.

The name comes from the internal method used to create the merge commit. Git looks at three commits (numbered in the above figure) to generate the final state of the merge.

This kind of branch interaction is a big part of what makes Git such a powerful development tool. We can not only create independent lines of development, but we can also share information between them by tying together their histories with a 3-way merge.

Now that we have access to the CSS updates from master, we can continue developing our crazy experiment. Link the CSS stylesheet to rainbow.html by adding the following HTML on the line after the element.

Stage and commit the update, then check that it’s reflected in the history.

Notice that we skipped the staging step this time around. Instead of using git add, we passed the -a flag to git commit. This convenient parameter tells Git to automatically include all tracked files in the staged snapshot. Combined with the -m flag, we can stage and commit snapshots with a single command. However, be careful not to include unintended files when using the -a flag.

Link to the Rainbow Page

We still need to add a navigation link to the home page. Change the “Navigation” section of index.html to the following.

As usual, stage and commit the snapshot.

Next, we’re going to brainstorm an alternative to the current rainbow.html page. This is a perfect time to create another topic branch:

Remember, we can do whatever we want here without worrying about either crazy or master. When git branch creates a branch, it uses the current HEAD as the starting point for the new branch. This means that we begin with the same files as crazy (if we called git branch from master, we would have had to re-create rainbow.html). After creating the new branch, our repository’s history looks like:

Our boss called in with some breaking news! He needs us to update the site immediately, but what do we do with our rainbow.html developments? Well, the beauty of Git branches is that we can just leave them where they are and add the breaking news to master.

We’ll use what’s called a hotfix branch to create and test the news updates. In contrast to our relatively long-running feature branch (crazy), hotfix branches are used to quickly patch a production release. For example, you’d use a hotfix branch to fix a time-sensitive bug in a public software project. This distinction is useful for demonstrating when it’s appropriate to create a new branch, but it is purely conceptual—a branch is a branch according to Git.

Blue Is The New Hue

Blue Is The New Hue

European designers have just announced that Blue will be this year's hot color.

We can’t use git commit -a to automatically stage news-1.html because it’s an untracked file (as shown in git status). So, let’s use an explicit git add:

Test these additions in a browser to make sure that the links work, it’s typo free, etc. If everything looks good, we can “publish” the changes by merging them into the stable master branch. Isolating this in a separate branch isn’t really necessary for our trivial example, but in the real world, this would give you the opportunity to run build tests without touching your stable project.

Remember that to merge into the master branch, we first need to check it out.

Since master now contains the news update, we can delete the hotfix branch:

The following diagram reflects our repository’s history before and after the merge. Can you figure out why was this a fast-forward merge instead of a 3-way merge?

Also notice that we have another fork in our history (the commit before master branches in two directions), which means we should expect to see another merge commit in the near future.

Ok, let’s finish up our crazy experiment with one more commit.

Note that the news article is nowhere to be found, as should be expected (this branch is a completely isolated development environment).

We’ll finish up our crazy experiment by adding a news item for it on the home page. Change the news list in index.html.

Astute readers have probably observed that this directly conflicts with what we changed in the news-hotfix branch. We should not manually add in the other news item because it has no relationship with the current branch. In addition, there would be no way to make sure the link works because news-1.html doesn’t exist in this branch. This may seem trivial, but imagine the errors that could be introduced had news-hotfix made dozens of different changes.

We’ll simply stage and commit the snapshot as if there were no conflicts:

Look at all those experimental commits (marked with asterisks below)!

We’re finally ready to merge our crazy branch back into master.

You should get a message that reads:

This is our first merge conflict. Conflicts occur when we try to merge branches that have edited the same content. Git doesn’t know how to combine the two changes, so it stops to ask us what to do. We can see exactly what went wrong with the familiar git status command:

We’re looking at the staged snapshot of a merge commit. We never saw this with the first 3-way merge because we didn’t have any conflicts to resolve. But now, Git stopped to let us modify files and resolve the conflict before committing the snapshot. The “Unmerged paths” section contains files that have a conflict.

Open up index.html and find the section that looks like: