Git Tutorial gives you an overview and talks about the fundamentals of GIT & the various version control systems and GIT.

What is Version Control

Version control is a system that records changes to a file or set of files over time so that you can recall specific versions later.

For the examples in this book, you will use software source code as the files being version controlled, though, in reality, you can do this with nearly any type of file on a computer.

If you are a graphic or web designer and want to keep every version of an image or layout (which you would most certainly want to), a Version Control System (VCS) is a very wise thing to use.

Also, you get all this for very little overhead.

Many people’s version-control method of choice is to copy files into another directory (perhaps a time-stamped directory, if they’re clever).

This approach is very common because it’s so simple, but it’s also incredibly error-prone. It’s easy to forget which directory you’re in and accidentally write to the wrong file or copy over files when you don’t mean to.

To deal with this issue, programmers long ago developed local VCSs that had a simple database that kept all the changes to files under revision control (see below figure). 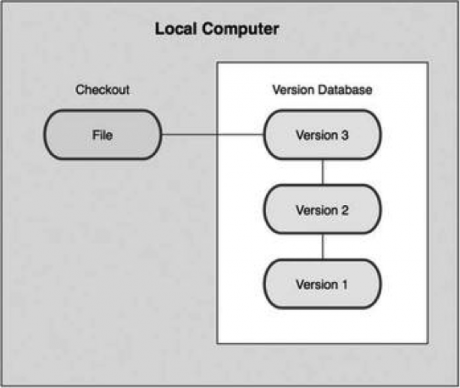 One of the more popular VCS tools was a system called RCS, which is still distributed with many computers today.

Even the popular Mac OS X operating system includes the RCS command when you install the Developer Tools.

This tool basically works by keeping patch sets (that is, the differences between files) from one change to another in a special format on disk; it can then re-create what any file looked like at any point in time by adding up all the patches.

This is where Distributed Version Control Systems (DVCSs) step in. In a DVCS (such as Git, Mercurial, Bazaar, or Darcs), clients don’t just check out the latest snapshot of the files: they fully mirror the repository.

Thus if any server dies, and these systems were collaborating via it, any of the client repositories can be copied back up to the server to restore it. Every checkout is really a full backup of all the data (see below Figure). 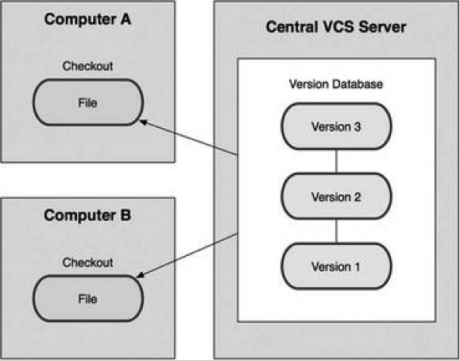 This setup offers many advantages, especially over local VCSs. For example, everyone knows to a certain degree what everyone else on the project is doing.

Administrators have fine-grained control over who can do what, and it’s far easier to administer a CVCS than it is to deal with local databases on every client.

However, this setup also has some serious downsides. The most obvious is the single point of failure that the centralized server represents. If that server goes down for an hour, then during that hour nobody can collaborate at all or save versioned changes to anything they’re working on.

If the hard disk the central database is on becomes corrupted, and proper backups haven’t been kept, you lose absolutely everything—the entire history of the project except whatever single snapshots people happen to have on their local machines.

Local VCS systems suffer from this same problem—whenever you have the entire history of the project in a single place, you risk losing everything.

This is where Distributed Version Control Systems (DVCSs) step in. In a DVCS (such as Git, Mercurial, Bazaar, or Darcs), clients don’t just check out the latest snapshot of the files: they fully mirror the repository.

Thus if any server dies, and these systems were collaborating via it, any of the client repositories can be copied back up to the server to restore it. Every checkout is a full backup of all the data.

Git began with a bit of creative destruction and fiery controversy. The Linux kernel is an open-source software project of a fairly large scope.

For most of the lifetime of the Linux kernel maintenance (1991-2002), changes to the software were passed around as patches and archived files. In 2002, the Linux kernel project began using a proprietary DVCS system called BitKeeper.

In 2005, the relationship between the community that developed the Linux kernel and the commercial company that developed BitKeeper broke down, and the tool’s free-of-charge status was revoked.

This prompted the Linux development community (and in particular Linus Torvalds, the creator of Linux) to develop their own tool based on some of the lessons they learned while using BitKeeper. Some of the goals of the new system were as follows:

The major difference between Git and any other VCS (Subversion and friends included) is the way Git thinks about its data. Conceptually, most other systems store information as a list of file-based changes.

These systems (CVS, Subversion, Perforce, Bazaar, and so on) think of the information they keep as a set of files and the changes made to each file over time, as illustrated in Figure below.

Fig: Other systems tend to store data as changes to a base version of each file.

Since its birth in 2005, Git has evolved and matured to be easy to use and yet retain these initial qualities.

It’s incredibly fast, it’s very efficient with large projects, and it has an incredible branching system for non-linear development.

Git doesn’t think of or store its data this way. Instead, Git thinks of its data more like a set of snapshots of a mini filesystem. Every time you commit or save the state of your project in Git, it basically takes a picture of what all your files look like at that moment and stores a reference to that snapshot.

To be efficient, if files have not changed, Git doesn’t store the file again—just a link to the previous identical file it has already stored. Git thinks about its data more like the Figure below.

Fig:  Git stores data as snapshots of the project over time.