Thus far, all of the collaboration workflows we’ve seen rely heavily on branches. For example, in the last module, a contributor had to publish an entire branch for us to merge into our project. However, it’s also possible to communicate directly on the commit level using a patch.

A patch file represents a single set of changes (i.e., a commit) that can be applied to any branch, in any order. In this sense, the patch workflow is akin to interactive rebasing, except you can easily share patches with other developers. This kind of communication lessens the importance of a project’s branch structure and gives complete control to the project maintainer (at least with regards to incorporating contributions).

Learn how to use GIT, from beginner basics to advanced techniques, with online video tutorials taught by industry experts. Enroll in Free GIT Online Training Demo!

Integrating on the commit level will also give us a deeper understanding of how a Git repository records project history.

If you’ve set up a Bitbucket account, you should also run the following commands to configure the downloaded repositories:

We’ll begin by pretending to be Mary again. Mary didn’t like the pink page that John contributed and wants to change it.

Developing in a new branch not only gives Mary an isolated environment, it also makes it easier to create a series of patches once she’s done editing the pink page. Find these lines in pink.html:

and change them to the following.

Stage and commit the update as normal.

Note that Mary’s local development process doesn’t change at all. Patches—like the integrator and centralized  workflows—are merely a way to share changes amongst developers. It has little effect on the core Git concepts introduced in the first portion of this tutorial.

Mary can create a patch from the new commit using the git format? patch command.

This creates a file called 0001-Change-pink-to-a-manly-color.patch that contains enough information to re-create the commit from the last step. The master parameter tells Git to generate patches for every commit in the current branch that’s missing from the master.

Open up the patch file in a text editor. As shown by the addresses in the top of the file, it’s actually a complete email. This makes it incredibly easy to send patches to other developers. Further down, you should see the following.

This unique formatting is called a diff, because it shows the difference between two versions of a file. In our case, it tells us what happened to the pink.html file between the 98e10a1 and 828dd1a commits (your patch will contain different commit ID’s). The -7,8 +7,7 portion describes the lines affected in the respective versions of the file, and the rest of the text shows us the content that has been changed. The lines beginning with – have been deleted in the new version, and the line starting with + has been added.

While you don’t have to know the ins-and-outs of diffs to make use of patches, you do need to understand that a single patch file represents a complete commit. And, since it’s a normal file (and also an email), it’s much easier to pass around than a Git branch.

Delete the patch file for now (we’ll re-create it later).

Before learning how to turn patches back into commits, Mary will add one more snapshot.

In pink.html, add the following on the line after the tag.

And, add the next line of HTML after Only real men wear pink!:

Stage and commit the snapshot.

Mary’s repository now contains two commits after the tip of the master: 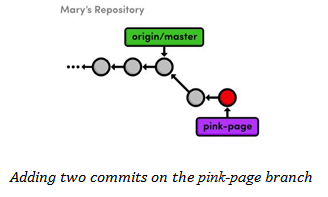 Mary can use the same command as before to generate patches for all the commits in her pink-page branch.

The first patch is the exact same as we previously examined, but we also have a new one called 0002-Add-a-pink-block-of-color.patch. Note that the first line of the commit message will always be used to make a descriptive filename for the patch. You should find the following diff in the second patch.

This is the same formatting as the first patch, except its lack of – lines indicates that we only added HTML during the second commit. As you can see, this patch is really just a machine-readable summary of our actions from the previous section.

Now that Mary has prepared a series of patches, she can send them to the project maintainer (us). In the typical patch workflow, she would send them via email using one of the following methods:

The point is, the .patch files need to find their way into the Git repository of whoever wants to add it to their project. For our example, all we need to do is copy the patches into the my-git-repo directory that represents our local version of the project.

Apply the Patches (You)

Copy the two patch files from marys-repo into my-git-repo. Using the new git am command, we can use these patches to add Mary’s commits to our repository.

First, notice that we’re doing our integration in a new topic branch. Again, this ensures that we won’t destroy our existing functionality and gives us a chance to approve changes. Second, the git am command takes a patch file and creates a new commit from it. The log output shows us that our integration branch contains Mary’s update, along with her author information.

Let’s repeat the process for the second commit.

The git am command is configured to read from something called “standard input,” and the < character is how we can turn a file’s contents into standard input. As it’s really more of an operating system topic, you can just think of this syntax as a quirk of the git am command.

After applying this patch, our integration branch now looks exactly like Mary’s pink-page branch. We applied Mary’s patches in the same order she did, but that didn’t necessarily have to be the case. The whole idea behind patches is that they let you isolate a commit and move it around as you please.

Integrate the Patches (You)

Once again, we’re in the familiar situation of integrating a topic branch into the stable master branch.

Mary’s updates are now completely integrated into our local repository, so we can get rid of the patch files with git clean. This was also an appropriate time to push changes to the public repository so other developers can access the most up-to-date version of the project.

Mary might be tempted to merge her pink-page branch directly into her master branch, but this would be a mistake. Her master branch must track the “official” repository’s master, as discussed in the previous module.

Patches are a convenient way to share commits amongst developers, but the patch workflow still requires an “official” repository that contains everybody’s changes. What would have happened if Mary wasn’t the only one sending patches to us? We may very well have applied several different patches or applied Mary’s contributions in a different order. Using Mary’s pink-page to update her master branch would completely ignore all these updates.

Taking this into consideration, our final patch workflow resembles the following. 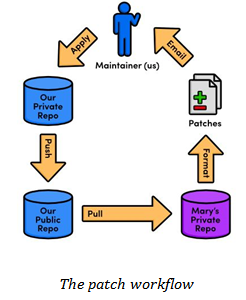