In the previous module, we shared information directly between two developers’ repositories: my-git-repo and marys-repo. This works for very small teams developing simple programs, but larger projects call for a more structured environment. This module introduces one such environment: the centralized workflow.

We’ll use a third Git repository to act as a central communication hub between us and Mary. Instead of pulling changes into my-git-repo from marys-repo and vice versa, we’ll push to and fetch from a dedicated storage repository. After this module, our workflow will look like the following.

Typically, you would store the central repository on a server to allow internet-based collaboration. Unfortunately, server configuration can vary among hosting providers, making it hard to write universal step-by-step instructions. So, we’ll continue exploring remote repositories using our local filesystem, just like in the previous module.

If you have access to a server, feel free to use it to host the central repository that we’re about to create. You’ll have to provide SSH paths to your server-based repository in place of the paths provided below, but other than that, you can follow this module’s instructions as you find them. For everyone else, our network-based Git experience will begin in the next module.

First, let’s create our central “communication hub.” Again, make sure to change /path/to/my-git-repo to the actual path to your repository. If you’ve decided to host the central repository on your server, you should SSH into it and run the git init command wherever you’d like to store the repository.

As in the very first module, git init creates a new repository. But this time, we used the –bare flag to tell Git that we don’t want a working directory. This will prevent us from developing in the central repository, which eliminates the possibility of messing up another user’s environment with git push. A central repository is only supposed to act as a storage facility—not a development environment.

If you examine the contents of the resulting central-repo.git folder, you’ll notice that it contains the exact same files as the .git folder in our my-git-repo project. Git has literally gotten rid of our working directory. The conventional .git extension in the directory name is a way to convey this property.

Update Remotes (Mary and You)

We’ve successfully set up a central repository that can be used to share updates between us, Mary, and any other developers. Next, we should add it as a remote to both marys-repo and my-git-repo.

Now for our repository:

Note that we deleted the remote connections between Mary and our my-git-repo folder with git remote rm. For the rest of this module, we’ll only use the central repository to share updates.

Push the Master Branch (You)

We didn’t clone the central repository—we just initialized it as a bare repository. This means it doesn’t have any of our project history yet. We can fix that using the git push command introduced in the last module.

Our central repository now contains our entire master branch, which we can double-check with the following.

This should output the familiar history listing of the master branch.

Recall that git push creates local branches in the destination repository. We said it was dangerous to push to a friend’s repository, as they probably wouldn’t appreciate new branches appearing at random. However, it’s safe to create local branches in central-repo.git because it has no working directory, which means it’s impossible to disturb anyone’s development.

Create a file called news-3.html in my-git-repo and add the following HTML.

Late yesterday evening, the Middle East's largest design house—until now, silent on the West's colorful disagreement—announced the adoption of Yellow as this year's color of choice.

Next, add a link to the “News” section of index.html so that it looks like:

Stage and commit a snapshot.

Publish the News Item (You)

Previously, “publishing” meant merging with the local master branch. But since we’re only interacting with the central repository, our master branch is private again. There’s no chance of Mary pulling content directly from our repository.

Instead, everyone accesses updates through the public master branch, so “publishing” means pushing to the central repository.

After merging into master as we normally would, git push updates the central repository’s master branch to reflect our local master. From our perspective, the push can be visualized as the following: 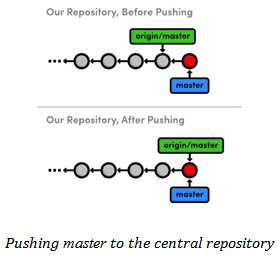 Note that this accomplishes the exact same thing as going into the central repository and doing a fetch/fast-forward merge, except git push allows us to do everything from inside my-git-repo. We’ll see some other convenient features of this command later in the module.

Next, let’s pretend to be Mary again and add some CSS formatting (she is our graphic designer, after all).

Add the following to the end of style.css:

And, stage and commit a snapshot.

Oops, Mary forgot to add some formatting. Append the h3 styling to style.css:

And of course, stage and commit the updates.

Clean Up Before Publishing (Mary)

Before Mary considers pushing her updates to the central repository, she needs to make sure she has a clean history. This must be done by Mary, because it’s near-impossible to change history after it has been made public.

This highlights another benefit of using isolated branches to develop independent features. Mary doesn’t need to go back and figure out what changes need to be rebased, since they all reside in her current branch. Change the rebase configuration to:

When Git stops to ask for the combined commit message, just use the first commit’s message:

Consider what would have happened had Mary rebased after pushing to the central repository. She would be re-writing commits that other developers may have already pulled into their project. To Git, Mary’s re-written commits look like entirely new commits (since they have different ID’s). This situation is shown below. 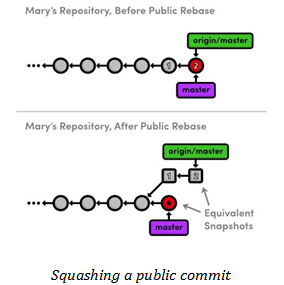 The commits labeled 1 and 2 are the public commits that Mary would be rebasing. Afterwards, the public history is still the exact same as Mary’s original history, but now her local master branch has diverged from origin/master—even though they represent the same snapshot.

So, to publish her rebased master branch to the central repository, Mary would have to merge with origin/master. This cannot be a fast-forward merge, and the resulting merge commit is likely to confuse her collaborators and disrupt their workflow.

This brings us to the most important rule to remember while rebasing: Never, ever rebase commits that have been pushed to a shared repository.

If you need to change a public commit, use the git revert command that we discussed in UNDOING CHANGES. This creates a new commit with the required modifications instead of re-writing old snapshots.

Now that her history is cleaned up, Mary can publish the changes.

She shouldn’t push the css-edits branch to the server, since it’s no longer under development, and other collaborators wouldn’t know what it contains. However, if we had all decided to develop the CSS edits together and wanted an isolated environment to do so, it would make sense to publish it as an independent branch.

Mary still needs to push the changes to the central repository. But first, let’s take a look at the state of everyone’s project. 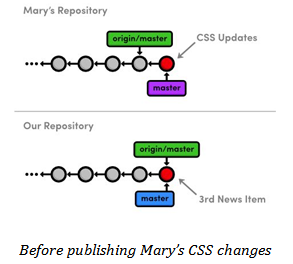 You might be wondering how Mary can push her local master up to the central repository, since it has progressed since Mary last fetched from it. This is a common situation when many developers are working on a project simultaneously. Let’s see how Git handles it:

This will output a verbose rejection message. It seems that Git won’t let anyone push to a remote server if it doesn’t result in a fast-forward merge. This prevents us from losing the Add 3rd news item commit that would need to be overwritten for origin/master to match mary/master.

Mary can solve this problem by pulling in the central changes before trying to push her CSS changes. First, she needs the most up-to-date version of the origin/master branch.

Remember that Mary can see what’s in origin/master and not in the local master using the .. syntax:

And she can also see what’s in her master that’s not in origin/master:

Since both of these output a commit, we can tell that Mary’s history diverged. This should also be clear from the diagram below, which shows the updated origin/master branch.

Mary is now in the familiar position of having to pull in changes from another branch. She can either merge, which cannot be fast-forwarded, or she can rebase for a linear history.

Typically, you’ll want to rebase your changes on top of those found in your central repository. This is the equivalent of saying, “I want to add my changes to what everyone else has already done.” As previously discussed, rebasing also eliminates superfluous merge commits. For these reasons, Mary will opt for a rebase.

After the rebase, Mary’s master branch contains everything from the central repository, so she can do a fast-forward push to publish her changes. 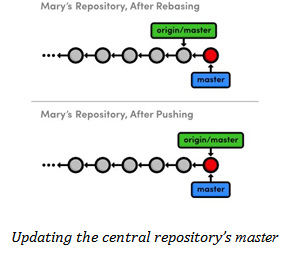 Pull in Changes (You)

Finally, we’ll switch back to our repository and pull in Mary’s CSS formatting.

Of course, the second log command won’t output anything, since we haven’t added any new commits while Mary was adding her CSS edits. It’s usually a good idea to check this before trying to merge in a remote branch. Otherwise, you might end up with some extra merge commits when you thought you were fast-forwarding your branch.

Our repository is now synchronized with the central repository. Note that Mary may have moved on and added some new content that we don’t know about, but it doesn’t matter. The only changes we need to know about are those in central-repo.git. While this doesn’t make a huge difference when we’re working with just one other developer, imagine having to keep track of a dozen different developers’ repositories in real-time. This kind of chaos is precisely the problem a centralized collaboration workflow is designed to solve: 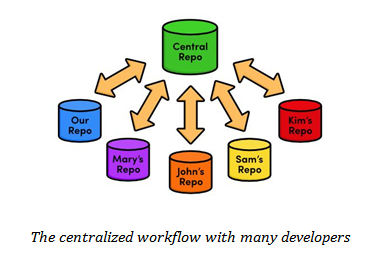 The presence of a central communication hub condenses all this development into a single repository and ensures that no one overwrites another’s content, as we discovered while trying to push Mary’s CSS updates.