Now that you have git basic concepts, understanding of version control systems in general, we can start experimenting with Git. Using Git as a VCS is a lot like working with a normal software project.

You’re still writing code in files and storing those files in folders, only now you have access to a plethora of Git commands to manipulate those files.

For example, if you want to revert to a previous version of your project, all you have to do is run a simple Git command.

Enthusiastic about exploring the skill set of Git? Then, have a look at the "GIT TRAINING" together with additional knowledge.

This command will dive into Git’s internal database, figure out what your project looked like at the desired state, and update all the existing files in your project folder (also known as the working directory). From an external standpoint, it will look like your project magically went back in time.

This module explores the fundamental Git workflow: creating a repository, staging and committing snapshots, configuring options, and viewing the state of a repository.

It also introduces the HTML website that serves as the running example for this entire tutorial. Very basic knowledge of HTML and CSS will give you a deeper understanding of the purpose underlying various Git commands but is not strictly required.

Before we can execute any Git commands, we need to create the example project. Create a new folder called my-git-repo to store the project, then add a file called index.html to it. Open index.html in your favorite text editor and add the following HTML.

Save the file when you’re done. This serves as the foundation of our example project. Feel free to open the index.html in a web browser to see what kind of website it translates to. It’s not exactly pretty, but it serves our purposes.

Now, we’re ready to create our first Git repository. Open a command prompt (or Git Bash for Windows users) and navigate to the project directory by executing:

where /path/to/my-git-repo is a path to the folder created in the previous step. For example, if you created my-git-repo on your desktop, you would execute:

Next, run the following command to turn the directory into a Git repository.

This initializes the repository, which enables the rest of Git’s powerful features. Notice that there is now a .git directory in my-git-repo that stores all the tracking data for our repository (you may need to enable hidden files to view this folder).

The git folder is the only difference between a Git repository and an ordinary folder, so deleting it will turn your project back into an unversioned collection of files.

Before we try to start creating revisions, it would be helpful to view the status of our new repository.

Execute the following in your command prompt.

Ignoring the On branch master portion, for the time being, this status message tells us that we’re on our initial commit and that we have nothing to commit but “untracked files.”

An untracked file is one that is not under version control.

Git doesn’t automatically track files because there are often project files that we don’t want to keep under revision control. These include binaries created by a C program, compiled Python modules (.pyc files), and any other content that would unnecessarily bloat the repository.

To keep a project small and efficient, you should only track source files and omit anything that can be generated from those files. This latter content is part of the build process—not revision control.

So, we need to explicitly tell Git to add index.html to the repository. The aptly named git add command tells Git to start tracking index.html:

In place of the “Untracked files” list, you should see the following status.

We’ve just added index.html to the snapshot for the next commit. A snapshot represents the state of your project at a given point in time.

In this case, we created a snapshot with one file: index.html. If we ever told Git to revert to this snapshot, it would replace the entire project folder with this one file, containing the exact same HTML as it does right now.

Git’s term for creating a snapshot is called staging because we can add or remove multiple files before actually committing them to the project history.

Staging gives us the opportunity to group related changes into distinct snapshots - a practice that makes it possible to track the meaningful progression of a software project (instead of just arbitrary lines of code).

We have staged a snapshot, but we still need to commit it to the project history. The next command will open a text editor and prompt you to enter a message for the commit.

Type Create index page for the message, leave the remaining text, save the file, and exit the editor. You should see the message 1 file changed among a mess of rather ambiguous output. This changed file is our index.html.

As we just demonstrated, saving a version of your project is a two-step process:

Staging files with the git add command doesn’t actually affect the repository in any significant way - it just lets us get our files in order for the next commit.

Only after executing git commit will our snapshot be recorded in the repository. Committed snapshots can be seen as “safe” versions of the project.

Git will never change them, which means you can do almost anything you want to your project without losing those “safe” revisions. This is the principal goal of any version control system. 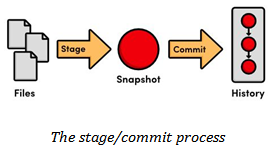 Note that git status now tells us that there is nothing to commit, which means our current state matches what is stored in the repository. The git status command will only show us uncommitted changes - to view our project history, we need a new command:

When you execute this command, Git will output information about our one and only commit, which should look something like this:

Let’s break this down. First, the commit is identified with a very large, very random-looking string (b650e4b…). This is an SHA-1 checksum of the commit’s contents, which ensures that the commit will never be corrupted without Git knowing about it.

All of your SHA-1 checksums will be different than those displayed in this tutorial due to the different dates and authors in your commits. In the next module, we’ll see how a checksum also serves as a unique ID for a commit.

Next, Git displays the author of the commit. But since we haven’t told Git our name yet, it just displays unknown with a generated username.

Git also outputs the date, time, and timezone (-0600) of when the commit took place. Finally, we see the commit message that was entered in the previous step.

Before committing any more snapshots, we should probably tell Git who we are. We can do this with the git config command:

Be sure to replace Your Name and your.email@example.com with your actual name and email.

The - a global flag tells Git to use this configuration as a default for all of your repositories. Omitting it lets you specify different user information for individual repositories, which will come in handy later on.

Let’s continue developing our website a bit. Start by creating a file called orange.html with the following content.

Then, add a blue.html page:

Next, we can stage the files the same way we created the first snapshot.

Notice that we can pass more than one file to git add. After adding the files, your status output should look like the following:

Try running git log. It only outputs the first commit, which tells us that blue.html and orange.html have not yet been added to the repository’s history.

Remember, we can see staged changes with git status, but not with git log. The latter is used only for committed changes. 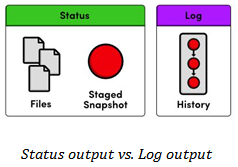 Use Create blue and orange pages as the commit message, then save and close the file. Now, the git log should output two commits, the second of which reflects our name/email configuration.

This project history can be visualized as:

Each circle represents a commit, the red circle designates the commit we’re currently viewing, and the arrow points to the preceding commit.

This last part may seem counterintuitive, but it reflects the underlying relationship between commits (that is, a new commit refers to its parent commit).

You’ll see this type of diagram many, many times throughout this tutorial.

The git adds command we’ve been using to stage new files can also be used to stage modified files. Add the following to the bottom of, right before the closing tag:

Next, add a home page link to the bottom of orange.html and blue.html (again, before the line):

You can now navigate between pages when viewing them in a web browser.

Stage and Commit the Snapshot

Once again, we’ll stage the modifications, then commit the snapshot.

The -m option lets you specify a commit message on the command line instead of opening a text editor.

This is just a convenient shortcut (it has the exact same effect as our previous commits).

Our history can now be represented as the following. Note that the red circle, which represents the current commit, automatically moves forward every time we commit a new snapshot.

The git log command comes with a lot of formatting options, a few of which will be introduced throughout this tutorial. For now, we’ll just use the convenient –online flag:

Condensing output to a single line is a great way to get a high-level overview of a repository. Another useful configuration is to pass a filename to git log:

This displays only blue.html history. Notice that the initial Create index page commit is missing, since blue.html didn’t exist in that snapshot.