Now that we know how to share information via a centralized workflow, we can appreciate some of the drawbacks of this collaboration model. While it may be convenient, allowing everyone to push to an “official” repository raises some legitimate security concerns. It means that for anyone to contribute content, they need access to the entire project.

This is fine if you’re only interacting with a small team, but imagine a scenario where you’re working on an open-source software project and a stranger found a bug, fixed it, and wants to incorporate the update into the main project. You probably don’t want to give them push-access to your central repository, since they could start pushing all sorts of random snapshots, and you would effectively lose control of the project.

But, what you can do is tell the contributor to push the changes to their own public repository. Then, you can pull their bug fix into your private repository to ensure it doesn’t contain any undeclared code. If you approve their contributions, all you have to do is merge them into a local branch and push it to the main repository, just like we did in the previous module. You’ve become an integrator, in addition to an ordinary developer: 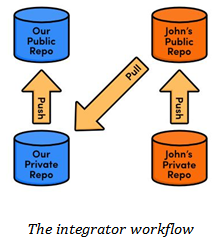 In this module, we’ll experience all of this first-hand by creating a free public repository on Bitbucket.org and incorporating a contribution from an anonymous developer named John. Bitbucket is a DVCS hosting provider that makes it very easy to set up a Git repository and start collaborating with a team of developers.

The first part of this module will walk you through setting up a Bitbucket account. Navigate your web browser to BITBUCKET.ORG and sign up for a free account.

You can choose any username for your account, but the email address should match the one you assigned to your Git installation with git config in THE BASICS. If you need to change your email, you can run another git config –global user.email you@example.com command.

Create a Public Repository (You) 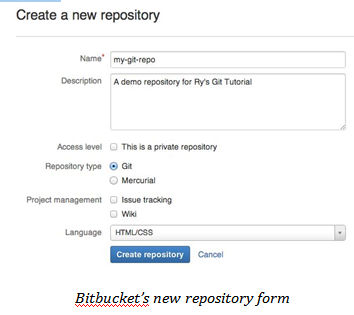 Essentially, we just ran git init –bare on a Bitbucket server. We can now push to and fetch from this repository as we did with central-repo.git in the previous module.

After initialization, Bitbucket offers some helpful instructions, but don’t follow them just yet—we’ll walk through importing an existing repository in the next section. 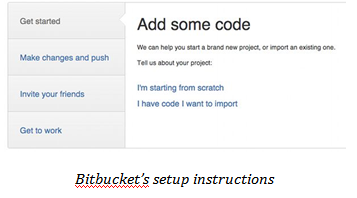 Push to the Public Repository (You)

Before populating this new repository with our existing my-git-repo project, we first need to point our origin remote to the Bitbucket repository. Be sure to change the portion to your actual Bitbucket username.

The utility of remotes should be more apparent than in previous modules, as typing the full path to this repository every time we needed to interact with it would be rather tedious.

To populate the remote repository with our existing code, we can use the same push mechanism as with a centralized workflow. When prompted for a password, use the one that you signed up with.

Browse the Public Repository (You)

We should now be able to see our project on the Bitbucket site. The Source tab displays all of the files in the project, and the Commits tab contains the entire commit history. Note that the branch structure of the repository is also visualized to the left of each commit. 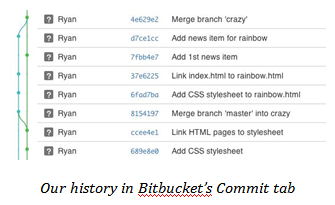 Having both a public and a private repository for each developer makes it easy to incorporate contributions from third-parties, even if you’ve never met them before.

Next, we’re going to pretend to be John, a third-party contributor to our website. John noticed that we didn’t have a pink page and, being the friendly developer that he is, wants to create one for us. We’d like to let him contribute, but we don’t want to give him push-access to our entire repository—this would allow him to re-write or even delete all of our hard work.

Fortunately, John knows how to exploit Bitbucket’s collaboration potential. He’ll start by cloning a copy of our public repository:

You should now have another copy of our repository called johns-repo in the same folder as my-git-repo. This is John’s private repository—a completely isolated environment where he can safely develop the pink page. Let’s quickly configure his name and email:

Of course, John should be developing his contributions in a dedicated feature branch.

In addition to being a best practice, this makes it easy for the integrator to see what commits to include. When John’s done, he’ll tell us where to find his repository and what branch the new feature resides in. Then, we’ll be able merge his content with minimal effort.

Create the file pink.html and add the following code:

Add the pink page to the “Navigation” section in index.html:

Then, stage and commit the snapshot as normal.

Now, John needs to publish his contributions to a public repository. Remember that we don’t want him to push to our public repository, which is stored in his origin remote. In fact, he can’t push to origin for reasons we’ll discuss in a moment. 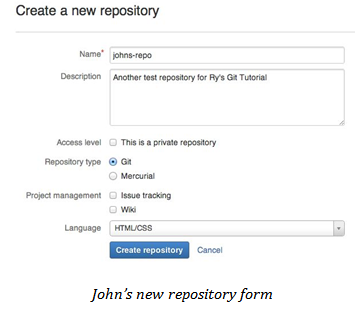 Back in John’s private repository, we’ll need to add this as a remote:

All John needs to do now is tell us the name of the feature branch and send us a link to his repository, which will be:

Note that John used a different path for pushing to his public repository than the one he gave us for fetching from it. The most important distinction is the transport protocol: the former used https:// while the latter used https://. Accessing a repository over HTTPS (or SSH) lets you fetch or push, but as we saw, requires a password. This prevents unknown developers from overwriting commits.

On the other hand, fetching over HTTP requires no username or password, but pushing is not possible. This lets anyone fetch from a repository without compromising its security. In the integrator workflow, other developers access your repository via HTTP, while you publish changes via HTTPS. This is also the reason why John can’t push to his origin remote.

Of course, if you’re working on a private project, anonymous HTTP access would be disabled for that repository.

Ok, we’re done being John and we’re ready to integrate his code into the official project. Let’s start by switching back into our repository and adding John’s public repository as a remote.

Note that we don’t care about anything in John’s private repository—the only thing that matters are his published changes. Let’s download his branches and take a look at what he’s been working on:

We can visualize this history information as the following. 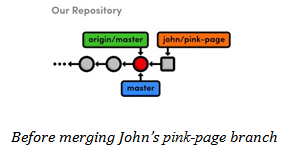 Let’s take a look at his actual changes:

Open up the pink.html file to see if it’s ok. Remember that John isn’t a trusted collaborator, and we would normally have no idea what this file might contain. With that in mind, it’s incredibly important to verify its contents. Never blindly merge content from a third-party contributor.

Assuming we approve John’s updates, we’re now ready to merge it into the project.

Notice that is the exact same way we incorporated Mary’s changes in the centralized workflow, except now we’re pulling from and pushing to different locations: 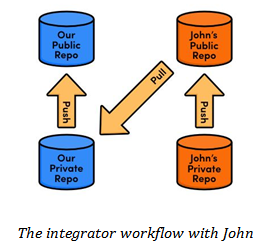 Furthermore, John’s workflow is just like ours: develop in a local, private repository, then push changes to the public one. The integrator workflow is merely a standardized way of organizing the collaboration effort—nothing has changed about how we develop locally, and we’re using the same Git commands as we have been for the last few modules.

We’ve integrated John’s contribution into our local my-git-repo repository, but no one else knows what we’ve done. It’s time to publish our master branch again.

Since we designated our public Bitbucket repository as the “official” source for our project, everyone (i.e., Mary and John) will now be able to synchronize with it.

Mary should now be pulling changes from our Bitbucket repository instead of the central one from the previous module. This should be fairly easy for her to configure.

Again, remember to change to your Bitbucket account’s username. For the sake of brevity, we’ll do a blind merge to add John’s updates to Mary’s repository (normally, Mary should check what she’s integrating before doing so).

For Mary, it doesn’t really matter that the updates came from John. All she has to know is that the “official” master branch moved forward, prompting her to synchronize her private repository.

John still needs to incorporate the pink page into his master branch. He should not merge directly from his pink-page topic branch because we could have edited his contribution before publishing it or included other contributions along with it. Instead, he’ll pull from the “official” master:

If John had updated master directly from his local pink-page, it could have wound up out-of-sync from the main project. For this reason, the integrator workflow requires that everyone pull from a single, official repository, while they all push to their own public repositories: 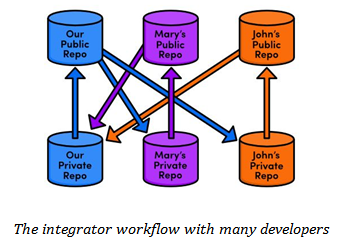 In this way, additions from one contributor can be approved, integrated, and made available to everyone without interrupting anyone’s independent developments.