Graphical display of data is an important aspect of programming in LABVIEW. Good knowledge of ARRAYS and CLUSTERS is important for graphical operations. VIs with graph usually collects the data in an array and then plots the data to the graph to obtain a waveform. TWO-DIMENSIONAL X-Y displays are required in most situations. Charts and graphs let you display plots of data in a graphical form. Charts interactively plot data, appending new data to old so that you can see the current value in the context of previous data, as the new data become available. Graphs plot pre-generated arrays of values in a more traditional fashion without retaining previously-generated data.

LabVIEW includes the following types of graphs and charts: 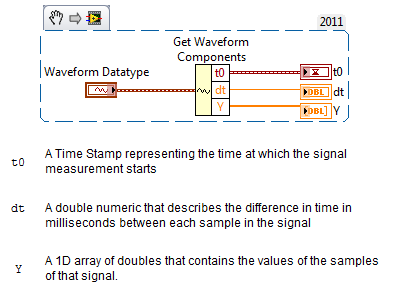 Timestamps for each value can be calculated by using t0, dt, and the index for the value. Other arbitrary information can be added to the waveform cluster as variants. This can be useful to attach additional information about the signal to show what manipulation may have already been performed on it.

LabVIEW functions accept the waveform data type. For CONTROLS AND INDICATORS of some data types, LabVIEW will automatically coerce the waveform allowing you to make the connection, even though the terminal’s required data type is not explicitly the waveform type. For example, if you connect a waveform wire to a numeric indicator a red dot will appear on the block diagram icon (to indicate coercion is being applied) and the last value of the Y array contained within that waveform will be displayed on the indicator on the front panel. If the waveform is connected to a 1D array indicator then LabVIEW will simply pass the Y data from the waveform to that indicator.

For the Formula Node or a MathScript Node, LabVIEW will not coerce the data automatically. To be able to present the Y values of the waveform into a Formula node as a 1D array or double numeric’s you will first have to use the Get Waveform Components VI which is found in the Waveform sub palette. Using this function and others contained within the Waveform palette, you can extract or modify data to any part of the waveform.