All LABVIEW arithmetic functions are polymorphic. This means that the inputs to these functions can be different DATA STRUCTURES such as scalar values and arrays. By definition, polymorphism is said to be the ability of a numeric function to adjust to input data of different data structures.
For example, the Add function can be used in the following ways.
1. Scalar + Scalar = Scalar addition.
2. Scalar + Array = The scalar is added to each element of array.
3. Array + Array = Each element of one array is added to the corresponding element of other array. 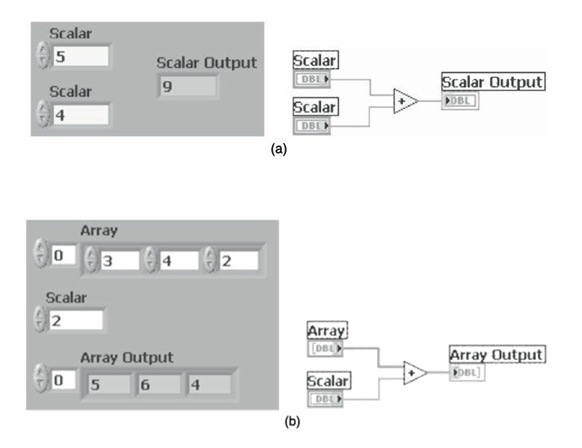 In the above Figure (a), two scalar values are added which results in a scalar output. In the above Figure (b), an array is added with a scalar value. The function adds the scalar value to each element of the array and returns the array output. In the above Figure (c), two arrays are added. The function adds each element of one array to the corresponding element of the other array and returns the array output. In the above Figure (d), two arrays of different sizes (i.e. number of elements) are added. The function adds corresponding elements and returns the output array, with the size of the smaller input array. The first array consists of three elements and the second consists of four elements. First three elements of both the arrays are added. The fourth element of the second array is not considered. Polymorphism does not perform matrix arithmetic when inputs are two-dimensional arrays (for example, two two-dimensional array inputs to a multiply function do element by element multiplication, not MATRIX multiplication).

For functions with two inputs, you can use the following input combinations:

For operations involving a scalar and an array or cluster, LabVIEW performs the function on the scalar and the respective elements of the structure. For example, LabVIEW can subtract a number from all elements of an array, regardless of the dimensionality of the array.

For operations that involve a numeric type and an array of that type, LabVIEW performs the function on each array element. For example, a graph is an array of points, and a point is a cluster of two numeric types, x and y. To offset a graph by 5 units in the x direction and 8 units in the y direction, you can add a point, (5, 8), to the graph.

The following illustration shows the possible polymorphic combinations of the Add function. 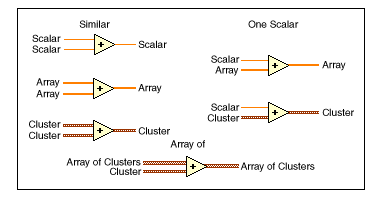 Logical functions with two inputs can have the same input combinations as the arithmetic functions. However, the logical functions have the further restriction that the base operations can only be between two Boolean values or two numbers. For example, you cannot have an AND between a Boolean value and a number.

The following illustration shows some combinations of Boolean values for the AND function.