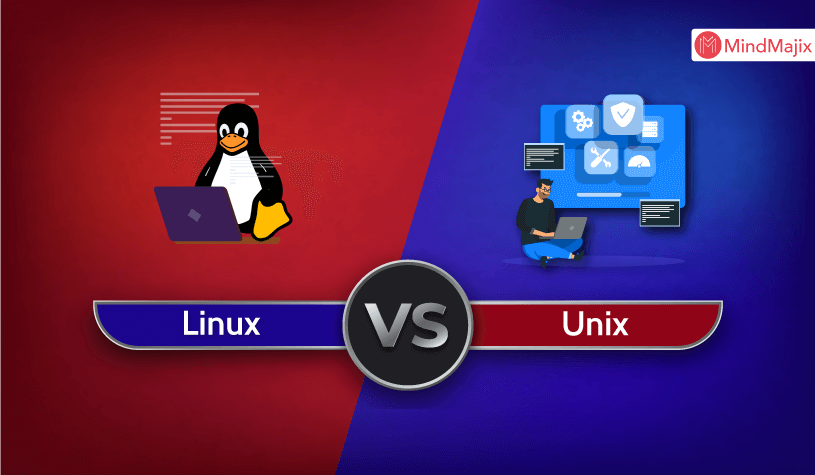 An operating system is the most important software that a computer cannot work without. In this article, we would be discussing Linux Vs Unix operating systems in-depth and find out which one is better. So stay tuned with us to know the core difference between Unix and Linux Commands, architecture, and Kernel. Here, you would be learning the following topics:

In Linux Vs Unix, You Will Learn

Unix is the multi-user and multi-tasking operating system developed at Bell Labs in the early 1970s. Unix systems have a graphical user interface that provides an easy to use environment. There are different versions of Unix, and some of the simplified versions are - Sun Solaris, GNU, and macOS X.

If you would like to Enrich your career with a Linux certified professional, then visit Mindmajix - A Global online training platform: “Linux Certification Course” . This course will help you to achieve excellence in this domain.

What are the features of the Unix operating system?

Some of the prominent features of Unix are as follows:

Linux is a free and open-source operating system that manages computer hardware resources and allows you to perform tasks such as surfing the web, editing files, etc.

What are the features of Linux?

The Linux operating system consists of four layers - Hardware, Kernel, Shell, and Application layer. Let us find out more about these layers:

Are Linux and Unix the same thing? No, they are not. Unix and Linux are different from each other, but yes they do share a relationship because Linux is derived from Unix. Linux system is a continuation of the Unix design. Is Linux better than Unix? Readout more to find out which is better and helpful for your working style.

There are certain differences between the shell commands of Unix and Linux. The commands of Linux and Unix may look similar but they are not the same. Let us understand it through examples.

Solaris also called Oracle Solaris belongs to the Unix family. Linux is compatible with more system architecture than Solaris does and therefore, Linux is more portable. Solaris seems better when it comes to hardware integration and stability. Linux has a faster development rate as compared to Solaris.

macOS is a Unix OS that has its Kernel called XNU. It is used in one of the most reliable PC's ie. Apple's computers. macOS is relatively easy to install. Linux is cheaper and more flexible. macOS uses the HFS+ file system, but Linux uses ext4.

Is Linux better than Unix?

Linux has gained more popularity because it is more flexible and free when compared to Unix. They are not the same but very much similar, even the commands in each distribution also vary. There are studies that show Linux is growing at a faster rate than any other operating system and it is believed that in the coming future it may leave Unix installation far behind.

Market and Future of Linux and Unix

History of Linux - Linux was introduced in 1991 and got popular in a short period of time. Originally, it was designed only for intel 386, but today it runs on every machine. It has millions of users, and it is doing well in the embedded systems, industrial automation, cloud computing, mobile devices, robotics, etc. it is definitively less popular for the desktop system industry.

Talking about its future, Linus Torvalds, the founder of Linux, has declared some developments and improvements in the features that will be compatible with a wider number of systems.

Unix is an old OS, and its advocates are continuously developing new specifications to make it compatible with the coming era of computing.

Unix is said to be the mother of all operating systems, and the Linux kernel is derived from it. The major difference between Unix and Linux doesn’t lie in the presentation part but in how they process internally at the kernel part.

We hope that this article must have clarified your doubts related to the Unix and Linux operating systems. Still, if you have any doubt, please drop the query in the comment section below.