An Overview Of Hadoop Hive

Hadoop is one of the most extensively used technologies for analyzing large amounts of Big data. Hive, on the other hand, is a Hadoop-compatible tool for storing and processing large datasets. This page introduces Apache Hive and walks you through the architecture and installation process.

What is Hadoop Hive

Commands in the Interactive Shell

In this Hadoop Hive article the following topics we will be discussing ahead:

What is Hadoop Hive - Table of Contents

What is Hadoop Hive? 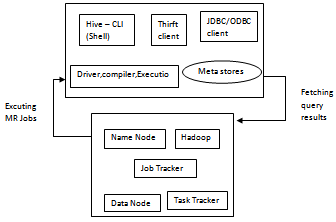 Execution engines: The component executes the tasks in proper dependency order and also interacts with Hadoop.

Configure the Hive-site.xml as below

$HIVE-HOME/bin/Hive is a shell utility that can be used to run Hive queries in either interactive or batch mode.

3. hive-connection to Hive server on the remote host

4. —hive conf: use-value for a given property.

The CCI when invoked without the – I option will attempt to load $HIVE-HOME/bin/Hive rc and HOME/.Hive rc as initialization files.

When $HIVE-HOME/bin/Hive is run with the –e or-option, it executes SQL Commands in batch mode.

.hive-f execute one or more SQL queries from a file.

Commands in the Interactive Shell

With this, we would like to wind up the article and hope you found the article informative. In case you have any doubt regarding any related concept, please feel free to drop the query in the comment section.