This LabVIEW Basics article covers all the fundamentals needed to build a basic system with LabVIEW.

In this LabVIEW Basics article, we will start from the basics of LabVIEW and learn all the major LabVIEW concepts. Now, let’s have a look at the following concepts of this article.

LabVIEW (Laboratory Virtual Instrument Engineering Workbench) is a graphical programming environment that has become prevalent throughout research labs, academia, and industry. It is a powerful and versatile analysis and instrumentation software system for measurement and automation. It's a graphical programming language called G programming is performed using a graphical block diagram that compiles into machine code and eliminates a lot of the syntactical details.

LabVIEW offers more flexibility than standard laboratory instruments because it is software-based. Using LabVIEW, the user can originate exactly the type of virtual instrument needed and programmers can easily view and modify data or control inputs.

The popularity of the National Instruments LabVIEW graphical data flow software for beginners and experienced programmers in so many different engineering applications and industries can be attributed to the software’s intuitive graphical programming language used for automating measurement and control systems.

There are three steps to create our application in the software environment:

In order to use a VI as a subVI in the block diagram of another VI, it is essential that it contains an icon and a connector. The two LabVIEW windows are the front panel (containing controls and indicators) and block diagram (containing terminals, connections and graphical code). 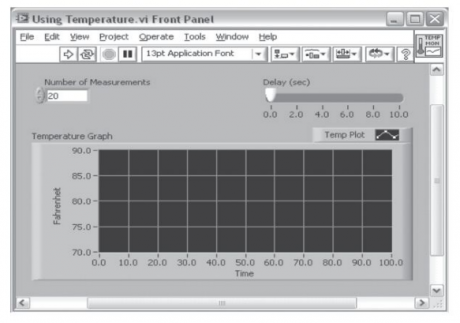 The front panel can include knobs, push buttons, graphs and various other controls (which are user inputs) and indicators (which are program outputs). Controls are inputs used to simulate instrument input devices and supply data to the block diagram of the VI, and indicators are outputs displays used to simulate instrument output devices and display data the block diagram acquires or generates. The front panel is customized to emulate control panels of traditional instruments, create custom test panels, or visually represent the control and operation of processes.

The components of a block diagram are lower-level VIs, built-in functions, constants and program execution control structures. Wires have to be drawn to connect the corresponding objects together to indicate the flow of data between each of them. Front panel objects have analogous terminals on the block diagram so that data can pass easily from the user to the program and back to the user. Use Express VIs, standard VIs and functions on the block diagram to create our measurement code.

Block diagram objects include the terminals, subVIs, functions, constants, structures and wires. LabVIEW is the easiest, most powerful tool for acquiring, analyzing and presenting real-world data. Terminals are entry and exit ports that exchange information between the panel and the diagram. Terminals are analogous to parameters and constants in text-based programming languages. Right-click the block diagram objects and select View As icon to change the icon view. 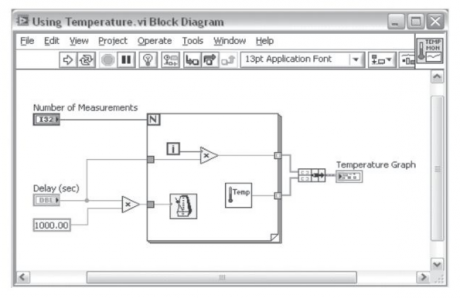 The Controls palettes contain sub-palettes of objects which you can use to create a VI. When you click a subpalette icon, the entire palette changes to the subpalette you selected. To use an object on the palettes, click the object and place it on the front panel.

Table 2.4 lists the tools available in the toolbar of the Controls and Function palettes.

Block Diagram of Toolbar in LabVIEW 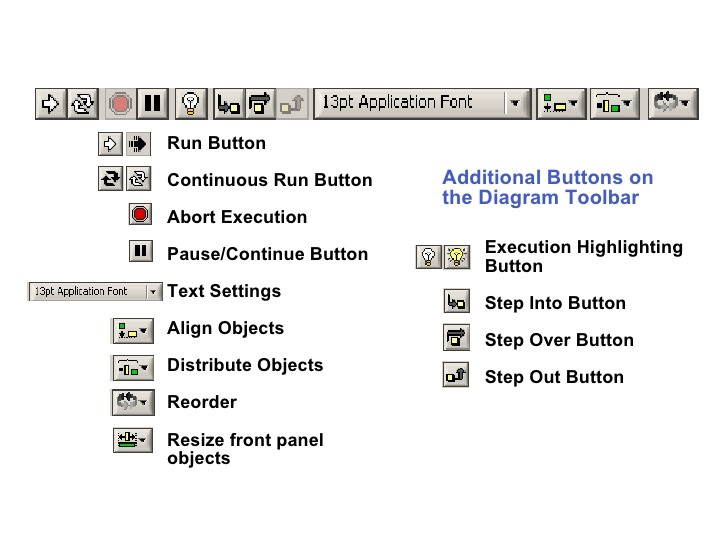 LabVIEW chooses which tool to select based on the current location of the mouse. You can manually choose the tool you need by selecting it on the Tools palette (from the menu bar, select View» Tools Palette). Now you can choose your desired tool, which remains selected until you choose another tool from the Tools palette.

How do I Create LabVIEW VI Library

When you launch LabVIEW, the Getting Started window appears as shown in Figure 2.3. You can begin in LabVIEW by starting from a blank VI or project, opening an existing VI or project and modifying it, or opening a template from which to begin your new VI or project.

[Related Article: Creating SUBVIS From Sections Of A VI in Modular Programming]

To open a new project from the Getting Started window, select the Empty Project option. A new, unnamed project opens, and you can add files to and save the project.

To open a new, blank VI that is not associated with a project, select the Blank VI option on the Getting Started window. A blank VI opens a blank front panel and blank block diagram.

The menus at the top of a VI window contain items common to other applications, such as Open, Save, Copy and Paste, and other items specific to LabVIEW. To save a new VI, select File»Save. If you have already saved your VI, select File»Save As to access the Save As dialog box to create a copy of the VI, or delete the original VI and replace it with the new one. 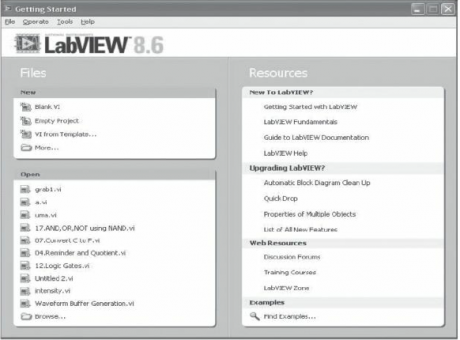 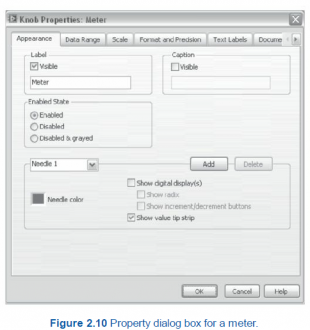 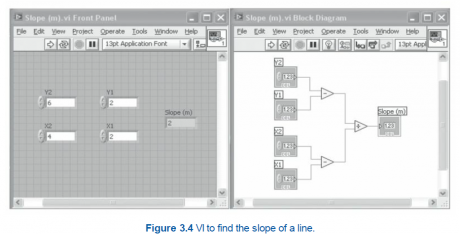 After you build a VI, build the icon and the connector pane so that you can use the VI as a subVI. The icon and connector pane correspond to the function prototype in text-based programming languages. Every VI displays an icon in the upper-right corner of the front panel and block diagram windows. An icon is a graphical representation of a VI. If you use a VI as a subVI, then the icon identifies the subVI on the block diagram of the VI.

The default icon can be changed to a custom icon that contains text, images, or a combination of both. Figure 3.5 shows the custom icon and connector pane created for the VI to find the slope of a given line. The icon for slope VI contains text and images while the connector has four inputs (y1, y2, x1, x2) and one output (m). To create a subVI, you need to build an icon and a connector pane.

The default icon of a VI contains a number that indicates how many new VIs you have opened since launching LabVIEW. You can create custom icons to replace the default icon by completing the following steps: 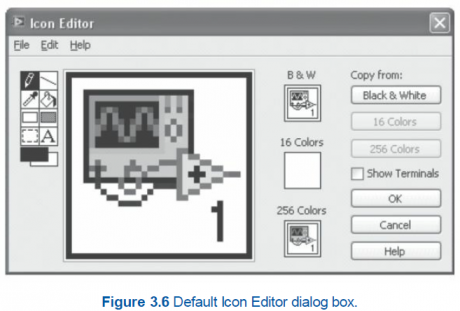 1. Double-click the hatched box which will select the entire icon. Delete the selected portion.

2. Double-click the rectangular box which will create a border for the icon.

3. Use the line/pencil tool to draw.

4. Double-click the Edit Text tool ‘A’ to edit the required text.

5. Choose the Text Tool Font to edit font, font size, color and alignment of the text.

6. Use the Select Color tool to choose the background color of the icon.

7. Use the Fill With Color tool to change the background color of the icon.

Using the tools on the icon editor, Figure 3.7 shows the custom Icon created for the slope VI. Use the Edit menu to cut, copy and paste images from and to the icon. When you select a portion of the icon and paste an image, LabVIEW resizes the image to fit into the selection area.

You also can drag a graphic from anywhere in the file system and place it in the upper-right corner of the front panel. LabVIEW converts the graphic to a 32×32 pixel icon. Depending on the type of monitor you use, you can design a separate icon for monochrome, 16-color and 256-color mode. Use the Copy from option on the right side of the Icon Editor dialog box to copy from a color icon to a black-and-white icon and vice versa.

After you select a Copy from option, click the OK button to complete the change. Figure 3.7 shows the custom icon created for the VI which finds the slope of a line. 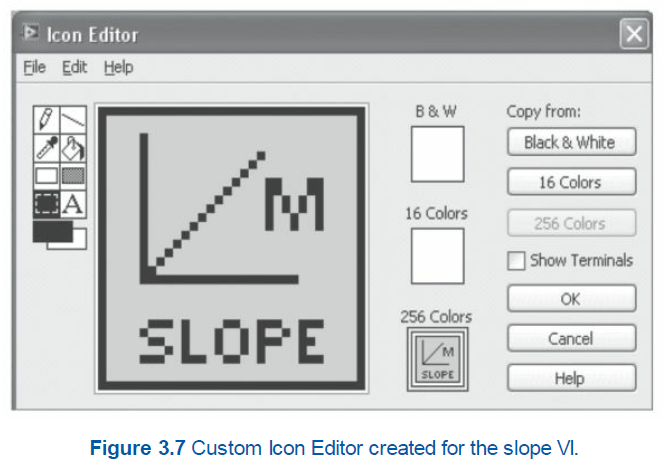 The New dialog box contains many LabVIEW template VIs that you can use to start building VIs. However, these template VIs are only a subset of the hundreds of example VIs included with LabVIEW. You can modify any example VI to fit an application, or you can copy and paste from an example into a VI that you create.

Data can be passed out of or into a loop through a tunnel. Tunnels feed data into and out of structures. The tunnel appears as a solid block on the border of the loop. The block is the color of the data type wired to the tunnel. Data passes out of a loop after the loop terminates.

When a tunnel passes data into a loop, the loop executes only after data arrives at the tunnel. In Figure 4.9, the iteration terminal is connected to a tunnel. The value in the tunnel does not pass to the Iteration Number indicator until the While Loop has finished execution. Only the last value of the iteration terminal displays in the Iteration Number indicator.

Terminals Inside Or Outside Loops

If you place the terminal of the Boolean control outside the While Loop as shown in Figure 4.8(b), and the control is set to FALSE if the conditional terminal is Stop if True when the loop starts, you cause an infinite loop. You also cause an infinite loop if the control outside the loop is set to TRUE and the conditional terminal is Continue if True.

Changing the value of the control does not stop the infinite loop because the value is only read once before the loop starts. To stop an infinite loop, you must abort the VI by clicking the Abort Execution button on the toolbar.

When you double-click a subVI, a front panel and a block diagram appear, rather than a dialog box in which you can configure options. The subVI controls and indicators receive data from and return data to the block diagram of the calling VI.

Click the Select a VI icon or text on the Functions palette, navigate to and double-click a VI, and place the VI on a block diagram to call a created subVI.

Complete the following steps to open a subVI and edit it.

[Related Article:Creating SUBVIS From Sections Of A VI in Modular Programming]

Complete the following steps to place a subVI on the block diagram.

Select File»Save to save a VI. You can save VIs as individual files or you can group several VIs together and save them in an LabVIEW Library (LLB). LLB files end with the extension .llb. National Instruments recommends that we save VIs as individual files, organized in directories, especially if multiple developers are working on the same project. 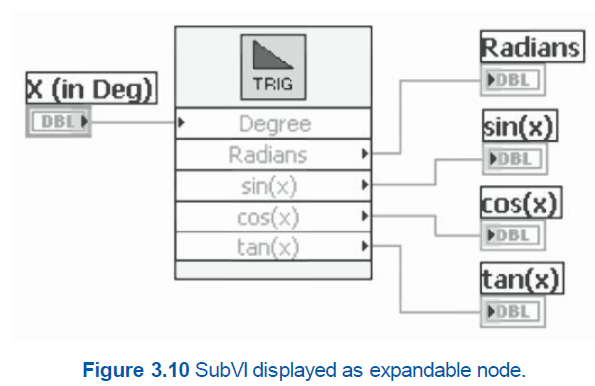 By default, inputs appear above outputs when you expand the subVI. Right-click a terminal in the expandable field and select Select Input/Output from the shortcut menu to select an input or output to display.