In the field of Artificial Intelligence, neural networks reflect the activity of the human brain, allowing computer programs to spot patterns and solve common problems. We'll explore how a basic Neural Network works and how it improves to generate the best predictions in this post.

The Artificial neural network is one of its advancements which is inspired by the structure of the human brain that helps computers and machines more like a human. This article helps you to understand the structure of Artificial Intelligence Neural Networks and their working procedure.

What is a Neural Network

A neural network is either a system software or hardware that works similar to the tasks performed by neurons of the human brain. Neural networks include various technologies like deep learning, and machine learning as a part of Artificial Intelligence (AI).

If you want to enrich your career and become a professional in AI, then visit Mindmajix - a global online training platform: "Artificial Intelligence Online Training" This course will help you to achieve excellence in this domain.

Artificial neural networks (ANN) are the key tool of machine learning. These are systems developed by the inspiration of neuron functionality in the brain, which will replicate the way we humans learn. Neural networks (NN) constitute both the input & output layers, as well as a hidden layer containing units that change input into the output so that the output layer can utilize the value.

These are the tools for finding patterns that are numerous & complex for programmers to retrieve and train the machine to recognize the patterns.

Most business applications and commercial companies make use of these technologies. Their main aim is to solve complex problems like pattern recognition or facial recognition, and several other applications include -- speech-to-text transcription, data analysis, handwriting recognition for check processing, weather prediction, and signal processing.

ANN works quite similar to human-brain. By making necessary connections, we can duplicate the working of the brain using silicon and wires which act similar to dendrites and neurons. As stimuli from the external environment are accepted by dendrites in the same way, the input creates electric impulses that travel through the neural network.

ANN consists of several nodes which behave like neurons. The nodes are connected by links (wires) for communication with one another. Nodes take input data to perform small operations on trained data and results of these operations are passed to other nodes (neurons). The output at the node is called its node value. Following is the image representing the basic structure of a neuron.

Neural networks have a remarkable ability to retrieve meaningful data from imprecise data, that is used in detecting trends and extract patterns that are difficult to understand either by computer or humans. A trained NN can be made an "expert" in the information that has been given to analyze and can be used to provide projections. 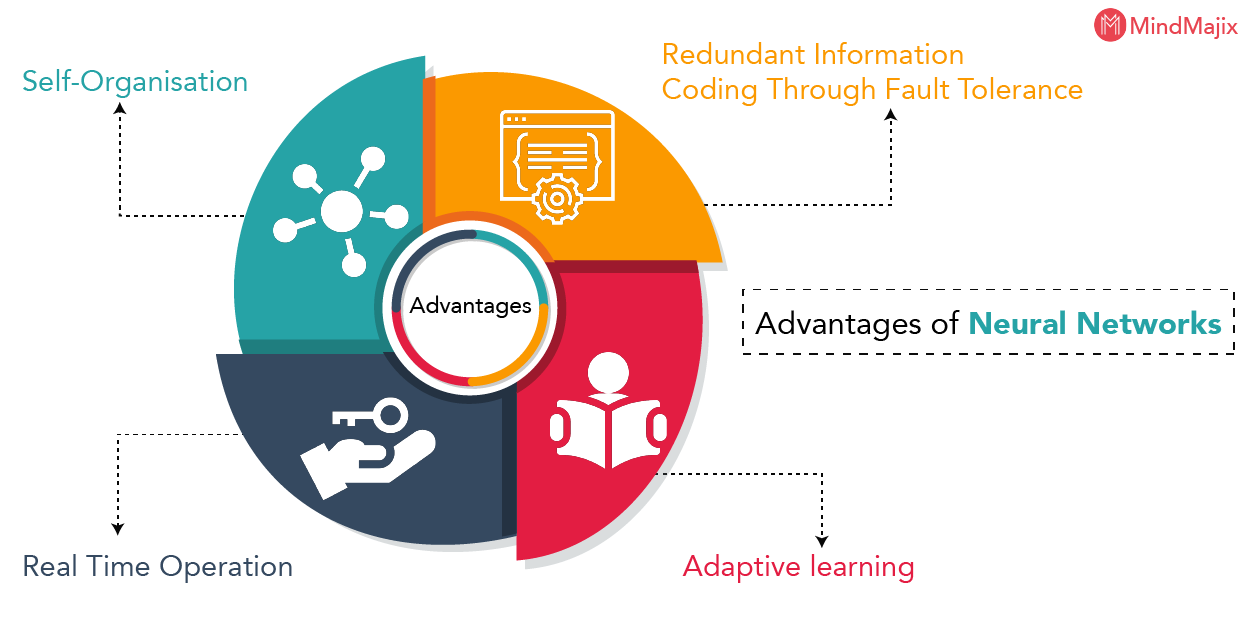 Some of the advantages of neural networks are listed below

An ANN includes a huge number of processors working parallel, which are arranged in layers. The first layer receives the raw data as input, similar to optic nerves of human eye visual processing. Every successive layer receives the raw input data as output from the previous layer, similar to neurons of the optic nerve receiving signals from those close to it. The final layer generates output. The below image shows several layers. 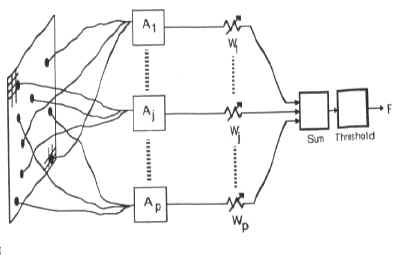 [ Related Article: What Is ANN and How It Works? ]

Neural networks are adaptable i.e. they can modify themselves according to the training and run parallelly to provide more information about the world. If the network generates a “desired” output, then there is no need to change the trained input data, and vice-versa. If the network generates an “undesired” output resulting in errors, then the system modifies the trained input data to improve the results.

Neural Networks are of many types and each of these comes with a particular use case.

This is the most common type of neural network. where information travels in uni-direction, that is from input to output. 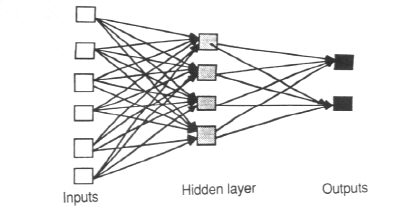 A more frequently used network type in which data can be transferred in various directions. These possess greater learning capabilities and are often used for complex tasks like learning handwriting or language recognition. 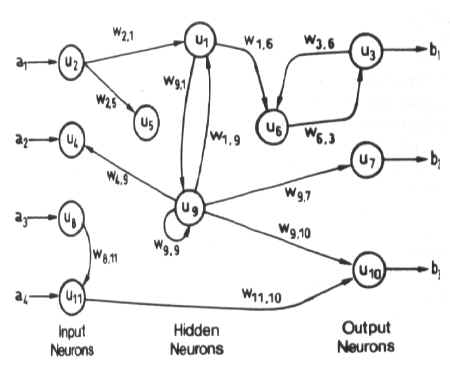 There are also other types that are rarely used, and some of them are Boltzmann machine networks, Hopfield networks, and convolutional neural networks.

Convolutional Neural Networks are similar to ordinary Neural Networks but, with two hidden layers, and they are made up of neurons that have the ability to learn. Every neuron receives some inputs, performs a dot product, and sometimes follows non-linearity. The complete network will show a single differentiable score function i.e., from class scores on one end to the raw image pixels on the other end.

And, have a loss function (e.g. SVM/Softmax) on the fully-connected layer. The tricks developed by developers to learning neural networks still apply.  Choosing the proper network depends on your choice and raw data that is to be given as input must be trained by you according to your preference. At times, we can use multiple approaches, in complex cases like voice recognition.

How do Neural Networks learn from trained Data?

In the initial stages, neural networks (NN) are fed with huge amounts of data. Training is generally given by providing input and educating the network on what should be the output. For example, facial recognition is the latest technology implemented by many smartphone companies.

Each input is gathered by the identification of matching data, like images of the person’s face, iris, various facial expressions, and all these inputs have to be trained. Providing proper answers will allow it to accommodate its internal data to learn how better it can perform.

Rules must be defined in such a way that, each node decides what to be sent to the next layer considering its own inputs from the previous layer. This is done by considering many principles like genetic algorithms, fuzzy logic, gradient-based training Bayesian method. ANNs are given basic rules related to object relationships. The right decision must be taken in building the rules.

Strategies of Machine Learning in ANN

Artificial neural networks have the ability to learn but they should be trained. There are many learning strategies namely:

Recognition of Image was the first area where neural networks were successfully applied, but the technology expanded to many areas such as

In what real-time applications neural networks are best suited?

A NN has broad applicability to real-time business problems. Now-a-days, they are successfully implemented by many industries including the telecom sectors. Ever since neural networks evolved as a new trend, identifying patterns in data has become much easier as they are well suited for forecasting needs and prediction.

The above ones are specific areas where neural networks are being applied today. Primary uses involve processes that operate according to strict patterns and have a huge amount of data. If the data involved is too heavy for a human brain to understand in a reasonable amount of time, the process of automation is easier through artificial neural networks.

From a technical point of view, one of the biggest challenges is the amount of time it takes to train networks, which often require the acceptable amount of computing power for even complex tasks. The second most issue to be considered is that neural networks are black boxes, in which the user groups the trained data and receives answers.

They are allowed to tune the answers, and the drawback is that they have no access to the exact process of decision-making. This is the reason why researchers are working actively, but artificial neural networks play a very big role in changing day-to-day lives.

Being a highly competitive world, we have a lot to gain from neural networks. Their capability to learn through better examples makes them powerful and flexible. Moreover, we need not devise an algorithm to perform a particular task.

We don’t require internal mechanisms for that task. These are well suited for real-time systems as they respond fast with the best computational times because of their parallel architecture.

Neural networks are also contributing to other areas of research like psychology and neurology. In neurology, it is used to investigate the internal mechanisms of the brain and model parts of living organisms. The most exciting aspect of neural networks is that there is a possibility that one-day 'conscious' networks might arise.

Some scientists are arguing that consciousness is a “mechanical property” and conscious neural networks are realistic and are possible. Neural networks have a huge potential and we can get the best from them by collaborating with fuzzy logic, computing, AI, and ML.

These courses are incorporated with Live instructor-led training, Industry Use cases, and hands-on live projects. This training program will make you an expert in Artificial Intelligence and help you to achieve your dream job.

Vaishnavi Putcha was born and brought up in Hyderabad. She works for Mindmajix e-learning website and is passionate about writing blogs and articles on new technologies such as Artificial intelligence, cryptography, Data science, and innovations in software and, so, took up a profession as a Content contributor at Mindmajix. She holds a Master's degree in Computer Science from VITS. Follow her on LinkedIn.