Keerthana Jonnalagadda working as a Content Writer at Mindmajix Technologies Inc. She writes on emerging IT technology related topics and likes to share the good quality content through her writings. You can reach her through LinkedIn. 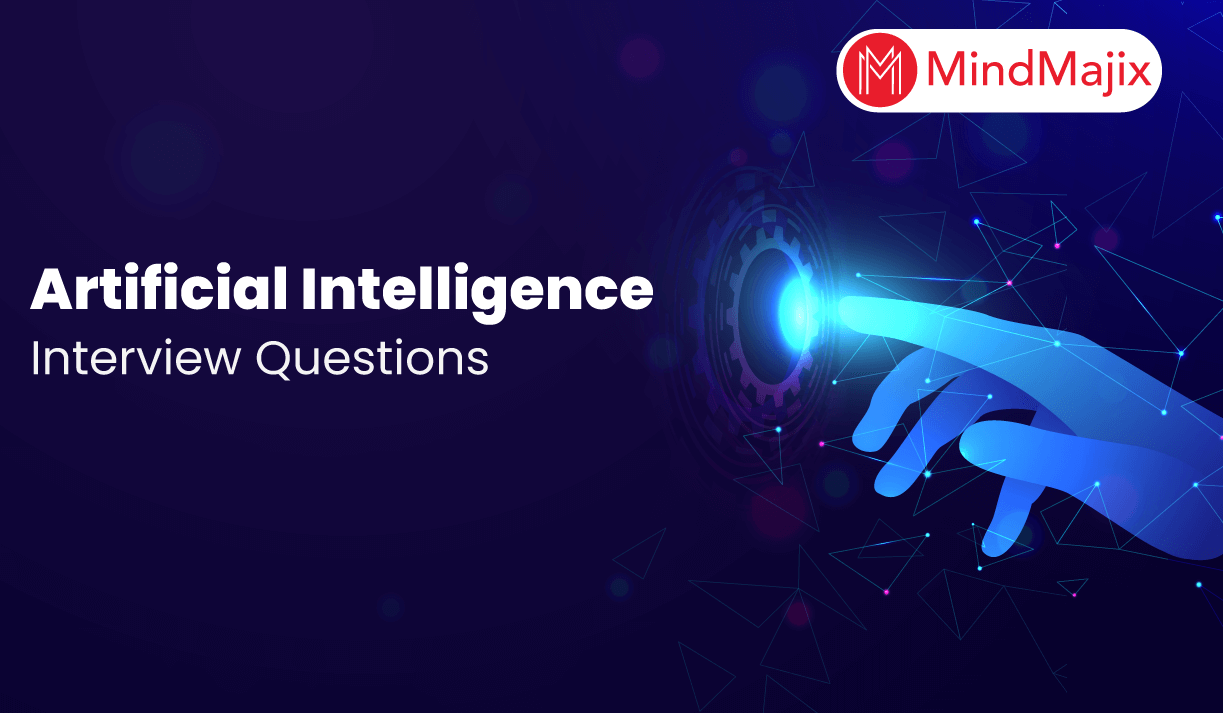 Artificial Intelligence (AI) is a well-known term for everyone as it plays the most important role in our daily life. From roots to robots, we can observe the development of AI. As AI solutions were spreading all over the world, the career in AI field leads to a great extent. Today, I would like to take you through Artificial Intelligence Interview Questions which are curated by the AI experts. Let’s get started.

We have categorized Artificial Intelligence Interview Questions - 2021 (Updated) into 2 levels they are:

Q1: What is Artificial Intelligence?

Ans: Artificial Intelligence (AI) is a stream of computer science that enhances the intelligent machines that work and react like humans. The ability of a machine to simulate intelligent human behaviour. AI is commonly used for various applications such as decision-making, speech recognition, perception, cognitive abilities, computer vision, and many more.

Ans: The applications of AI are as follows:

Q3: What are the programming languages used for Artificial Intelligence?

Ans: The following are the best AI programming languages used for Artificial Intelligence:

Q4: How many Types of Artificial Intelligence are there? What are they?

Ans: There are four types of Artificial Intelligence as follows:

Q5: What are the stages of learning AI?

Ans: The following are the stages of learning AI:

Artificial General Intelligence (AGI): It is also known as Strong AI, which is considered a treat to many scientists' human existence. It is an evolution of AI where machines can think and make decisions just like humans.

Artificial Normal Intelligence (ANI): It is also known as Weak AI that can perform only a defined activity set. It does not perform any thinking ability; instead, it performs a set of pre-defined functions.

Artificial Super Intelligence (ASI): ASI can perform everything that a human can do. Alpha 2 is an example of ASI, which is the first humanoid ASI robot.

Q6: What is an intelligent agent in Artificial Intelligence?

Ans: An Intelligent Agent (IA) refers to an autonomous entity that acts as a directing its activity to achieve goals as an agent upon an environment using observation by actuators and sensors as an intelligent.

Q7: What is the difference between Strong AI and Weak AI?

Strong AI has a complex algorithm that helps it act in various situations, whereas Weak AIs are pre-programmed by humans.

Ans: In Artificial Intelligence, an expert system is a computer system that imitates human experts' decision-making ability. Expert systems are developed to solve problems by reasoning the bodies of knowledge, represented mainly as an if-then formula instead of conventional procedural code.

Q9: What are the characteristics of expert systems?

Ans: An expert system is designed to have the following characteristics:

Q10: What is A* Search Algorithms in AI?

Ans: A* is formulated with weighted graphs, that means it can find the best path involving the smallest cost in terms of time and distance. This makes A* algorithm in artificial intelligence an informed search algorithm for best-first search. A* search algorithm separates it from other traversal techniques as it has a brain.

Q11: What are the various domains of Artificial Intelligence?

Ans: The following are the various domains of Artificial Intelligence:

Q12: What is Machine Learning?

Ans: Machine Learning is an application of Artificial Intelligence (AI) that offers systems an ability to learn and improve from experience automatically without being programmed externally. It focuses on enhancing computer programs that can access the data and use it to learn accordingly. To make it simple, Machine Learning is a subset of AI that uses data to enhance machines in solving complex problems.

Q13: What are the different types of Machine Learning (ML)?

Ans: There are three different types of Machine Learning:

Q14: What is the difference between AI and ML?

Q15: What is Natural Language Processing?

Ans: Natural Language Processing (NLP) is a subfield of Artificial Intelligence, computer science, and linguistics concerned with the communications between human language and computer language that helps in specific how to program computers to analyze and process large amounts of natural language data.

Q16: What is an Artificial Neural Network?

Ans: An Artificial Neural Network (ANN) is a computing system designed to simulate the human brain analyzes and processes information. It acts as a foundation of AI and solves the problems that prove difficult or impossible or statistical standards. ANN has a self-learning capability that allows users to produce better results.

Q17: What are the commonly used types of neural networks in AI?

Ans: The following are the three commonly used types of neural networks in AI:

Q18: What is Deep Learning?

Ans: Deep Learning is an AI function that imitates the working of the human brain in processing data for use in recognizing speech, making decisions, detecting objects, and translating languages. It can learn without human guidance, drawing from data which is both unlabeled and unstructured.

Q19: What are Fuzzy Logic systems in AI?

Ans: Fuzzy logic (FL) is a method of reasoning that represents human reasoning. The approach of FL imitates the process of decision-making done by humans, including all possibilities between YES or NO's digital values. It works on the levels of possibilities of input to achieve a definite output.

Ans: The various search algorithms in AI are:

Q22: What are the steps involved in Machine Learning?

Ans: The steps that are involved in Machine Learning are as follows:

Q23: List out the two various kinds of steps that we make in constructing a plan?

Ans: The following are two various steps that we make in constructing a plan:

Q24: What are the advantages of an expert system?

Ans: The following are the advantages of an expert system:

Q25: What are the various components of the Expert system?

User Interface: User Interface allows user to communicate with the expert system to find the solutions for a complex problem

Knowledge Base: The Knowledge Base is a kind of Storage that is used to store high-quality and domain-specific knowledge

Inference Engine: It is the main processing unit of an expert system. It enables various inference rules to the knowledge base to bring a conclusion. The system extracts the information from the KB with the inference engine.

Ans: In the context of AI and DL system, the game theory allows some of the key capabilities required in multi-agent environments in which various AI programs are required to interact to meet the goals.

Game Theory is a branch of mathematics used to develop the strategic interactions between multiple players with pre-defined rules and the outcomes. It is also used to define several instances in our daily life and machine learning models.

Ans: The Turing Test is a process of inquiry in Artificial Intelligence (AI) to determine whether a computer or not, which is capable of thinking like a human being. The Turing test is named after Alan Turing, is the method of testing a machine’s human-level intelligence.

Ans: Markov Decision Processes (MDPs) is a mathematical framework for designing sequential decision problems under uncertainty and Reinforcement Learning problems. The main goal of this process is to achieve maximum positive rewards by choosing the optimum policy.

Ans: The following are the four elements of MDP:

In this process, the agent implements an Action A to transition from the start state to the End state, and while performing these actions, the agent receives few rewards. The series of actions taken by the agent can be defined as a policy.

Q30: What is FOPL in Artificial Intelligence?

Q31: What does the language of FOPL include?

Ans: The language of FOPL includes the following:

Ans: The following are the list of few machine learning algorithms:

Q33: What is K-means clustering?

Ans: K-means clustering is an unsupervised learning algorithm used to identify data objects clusters in a dataset. K-means attempts to classify data without having trained with labelled data. Once the algorithm has been executed, and the groups are defined, users assign any new data to the most relevant group.

Q34: What are the real-world examples of K-means?

Ans: The following are the real-world examples of K-Means:

Q35: What is overfitting?

Ans: Overfitting refers to a design that develops the training data. It occurs when a model learns the noise and detail available in the training data; thus, it negatively impacts the performance of the model on the new data.

Q36:What are methods used to avoid overfitting in neural networks?

Ans: The following are methods used to avoid overfitting in neural networks:

Ans: Hidden Markov Model is a statistical model used to describe the evolution of observable events that depend on internal factors, that are not observable directly. We can call the observed event a symbol and the invisible factor underlying the observation of a state.

Q38: What are the applications of Machine Learning?

Ans: The following are the applications of Machine Learning:

Q39: What is TensorFlow?

Ans: TensorFlow is an end-to-end open-source library for numerical computation and large-scale machine learning. It includes a flexible ecosystem of tools, comprehensive, and community resources that allow developers to build and deploy the application easily. It holds together a combination of deep learning and machine learning algorithms and models to make them useful in a common metaphor.

Ans: A Hash Table is a data structure used to store data in an associative way. In this table, data is stored in an array format where each data has its respective unique index value.

On winding up, these TOP frequently asked interview questions will help you to crack the interview easily. There is more number of job openings and this was the best time to grab an opportunity. All the best! Thanks for learning!