Microsoft Power Apps offers a modern approach to developing business applications for mobile, tablet, and browser platforms. Learning  Microsoft Power Apps will help you through the creation of robust and productive apps that will add value to your organization.

But, before we get into the interview questions, here are some facts that show how the demand for Power Apps is growing:

The above points demonstrate a considerable need for PowerApps expertise in the market.

We have categorized Power Apps Interview Questions into two levels:

If you are just getting started in this field, these PowerApps interview questions for freshers will be helpful in your preparation

Ans: Power Apps is a Platform as a Service. It enables you to create mobile apps that run on different operating systems, such as Windows, iOS, and Android. At its core, it is a suite of data platforms, connectors, services, and apps that offer a quick application development environment to create custom apps for the business requirements.

2. What programming language is Power Apps?

3. What are the main components of Power Apps?

Ans: The main components of Power Apps that one needs to understand before developing an app are

Ans: Microsoft Power Apps includes a lot of features to develop apps like a pro and, more significantly, with minimal effort. Some of them are:

5. What are the benefits of using Power Apps?

6. What is the difference between a Model-driven app and a Canvas app?

7. Define common data services, and why should we use them?

Ans: Common data service lets the data get integrated from different sources into one store that can be easily used in Power Automate, Power Virtual Agent, Power BI, and Power Apps. This makes the app developing experience seamless.

Common Data Service includes a predefined collection of entities that cover common scenarios. Still, you can also create new entities that are unique to your organization and populate them with data using Power Query. App developers can then use this data to construct rich applications with Power Apps. 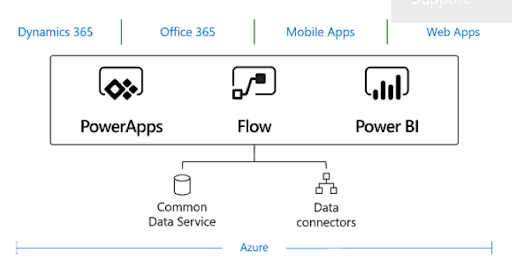 8. What type of apps can be created in Power Apps?

9. Is it possible to use multiple data sources in one canvas app?

Ans: Yes. With Power Apps, you can create any number of connections. Once it is done, any number of data sources can be used in one app.

10. What are the different ways to submit data from Power Apps?

Ans: This task can be executed by using two functions – Patch() and Submit form(). However, Patch() can also be used to upload partial data.

11. Can we access local network data sources in Power Apps?

Ans: Yes, we can easily connect to the local network data sources.

12. How can Error Handling be implemented in Power Apps?

Ans: To do so, first, we will have to get information about any errors through the Errors function. And then, through Validation and DataSourceInfo, some of the errors can be ignored even before they take place.

The Canvas App introduced the 'IfError' and 'isError' functions, to manage errors and display the appropriate message.

Formula-level error management must be enabled in order to use these features. To enable it, follow the steps below:

13. How is it possible to use media files in the Canvas app?

Ans: Up to 200 MB of media for each app can be uploaded to Power Apps. However, what is majorly recommended is using media/blog storage services, such as Azure Media or Azure Storage, and embedding the media URL to the app.

14. What is a Power Apps collection?

15. How do you create different user environments in Power Apps?

Ans: An environment is referred to as the space to keep, manage, and share the business's data, apps, and flow. It can also be regarded as a container that distinguishes apps based on different target audiences, security needs, and roles. However, creating or choosing the environment used depends on the company and the apps you are thinking of developing.

16. How many types of variables are there in Power Apps?

Ans: Local, global, and collections are the three types of variables.

17. How can a local or global variable be defined or used in Power Apps?

The syntax for global variables:

The syntax for local variable:

18. Is it possible to create Power Apps without gaining access to a license?

Ans: No. Neither creation nor consumption of Power Apps is possible without a license.

Ans: Flow in Power Apps allows you to respond to an event in one service (like SharePoint online) and then do something with the data in another service (such as Twitter).

20. What is the difference between Power Apps and logic apps?

Ans: Azure Logic Apps is a service that allows you to integrate apps, build workflows, and more. Power Apps are used to create graphical user interfaces. Since almost everything can be referred to as an application or an app, it's not logical to suppose that all applications are similar in some manner.

21. What are the different types of data sources that can link to data window controls?

22. How can you boost the performance of Power Apps?

Moving on, if you are an experienced Power Apps professional who has been in the industry for a while, these Power Apps interview questions will help you ace your next job interview.

24. What are DLP policies in Power Apps?

Ans: To safeguard data in your organization, you may use Power Apps to define and enforce policies that restrict which consumer connectors can share with certain business data. These policies are known as data loss prevention (DLP) policies.

DLP policies ensure that data is controlled uniformly across your organization and prevent essential company data from being accidentally shared to connections such as social networking sites.DLP policies can be defined and managed at the tenant or environment level using the Power Platform admin center.

25. What is the difference between the Combo box and dropdown in Power Apps?

Ans: Combo boxes and dropdowns are two Power Apps controls that are frequently used to offer a list of options to users.

27. What is the difference between IsMatch, Match, and MatchAll functions in Power Apps?

Ans: The IsMatch function compares a text string to a pattern, which can be a random string, a regular expression, or a predefined pattern. The MatchAll and Match functions return the match's contents, including any sub-matches.

28. What’s the difference between Lookup and Filter Functions?

29. What is Power Apps delegation?

Ans: Delegation is the point at which the expressiveness of Power Apps formulas reaches the need to limit network data transfer. In short, rather than transmitting data to the app for local processing, Power Apps will outsource data processing to the data source.

Working with huge data sets necessitates the use of delegated data sources and formulae. It's the only way to keep your app running smoothly and guarantee users have access to all of the information they require.

30. What is the use of the Power Apps Loading Spinner?

Ans: In PowerApps, a Loading Spinner is an animated element that displays that loading is in progress. The loading spinner appears when the data is slowly loaded. This means that it aids in informing the user that the process is in busy mode and that it may take some time for something to materialize.

It is also known as the SpinnerLoaderProgress indicator. Similarly, in PowerApps, if data loading is slow in the app and you want to place a spinner to reduce the wait time, this is referred to as a PowerApps Loading Spinner. Microsoft included a "LoadingSpinner" option in the Advanced tab as well as the Drop-Down menu in the upper left corner of the app.

Ans: The Distinct function applies a formula to each table entry and returns the results in a one-column table, deleting duplicate values. The column's name is the result.

The formula has access to the fields of the current record being processed.

Table: The table is used to evaluate across.

Formula: A formula is used to evaluate each record.

32. What are Power Apps templates?

Ans: Templates are a quick and straightforward method to create apps that link to various data sources. Log in to PowerApps.com to access the pre-built templates. However, there are some advantages to using templates:

33. What are the differences between Power Apps workflows and Power Apps pages?

34. What exactly is the difference between Power Apps and Power Automate?

Ans: Power Apps is a declarative environment that uses connectors to enable content access through a customizable user experience. Power Automate is a workflow engine that uses the same connectors as Power BI to provide automatic content access.

35. What exactly is delay output in Power Apps?

Ans: When DelayOutput is set to true, there is a second delay before the changes are recognized. This is done to give you time to complete typing what you want. When used to aid TextInput, the delay works well.

36. What would you do if a Gpf was found in your application?

37. Is it possible to use the canvas app in a model-driven app?

38. When there are frequent updates, how do you ensure the versioning of a canvas app in a collaborative environment?

Ans: While saving the app, you can leave a version-specific remark or comment. You may also place a label on the app's Home screen to represent a version number that the app's creator can manually update.

39. What are two different types of Power Apps authentication?

40. What are Power Apps' limitations?

Ans: Power Apps have limits that companies should be aware of despite their strength and breadth:

Wrapping up the article, by now, you would have understood how effective Power Apps is. If you're getting ready for an interview, these Power Apps interview questions will prove to be helpful.