The scripting feature of QlikView allows you to control the data load and transformations. Scripts are developed in the script editor. After developing the scripts, we have to execute them to get the required output. But, before execution, we have to debug the scripts to remove the errors. Debugging is helpful for the successful execution of the program.

When the software is in the development phase, it will go through troubleshooting, testing, updating, etc. Generally, the software comprises bugs, errors that need to be fixed. Debugging is a mechanism of solving the error or bug of the software. Debugger detects, analyzes, and removes errors.

Debugging process starts immediately when the development of the software code is completed. The debugging process continues in consecutive stages. The advantages of Debugging are as follows:

It identifies the error spontaneously. This makes the software development process hassle-free and uncomplicated.

It helps the developers in minimizing ineffective information.

With the help of debugging, developers can evade difficult testing code.

We insert breakpoints to the script to stop the debug execution at particular lines of code to check the values of the variables and output messages. When we arrive at the breakpoint, we will stop the execution. Breakpoints in the script are included in referring to the section.

For adding a BreakPoint, we should do any of the following:

Inside the script, press the area instantly at the right side of the line number where you have to insert a breakpoint.

The deletion of a BreakPoint is carried out by doing any one of the following:

We can enable and disable the Breakpoints. In the breakpoints menu, we can see the following options:

Through lengthy load times, debugging scripts that heaps plenty of data that can be massive. In this situation, a limited load is useful. When this option is used, QlikView will load the data that is mentioned in the input box.

The primary reason for errors is the inappropriate use of syntax. QlikView has a feature called “Syntax Check” through which we can check the syntax errors of the QlikView scripts.  If any syntax error is detected, it will be underlined. In the below screenshot, we can see how a syntax error is underlined:

Along with Limited Load, we will use a “Trace” statement for debugging the scripts. This statement is invoked from the script and used to develop all kinds of information to the “script execution progress”.

Data Load editor debug panel includes a toolbar through the following choices, they are: 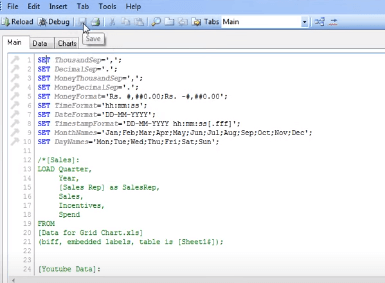 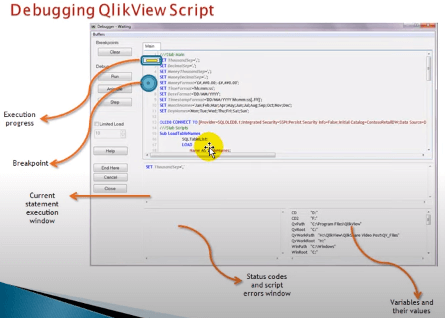 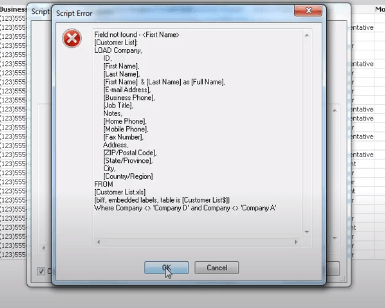 The QlikView script execution progress is displayed in the below screenshot: 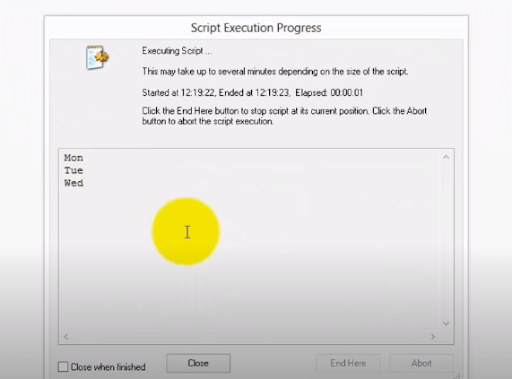 With the help of the above screenshots, we can understand the Debugging Process. First, a QlikView script will be taken as input, and with the help of some key features like a breakpoint, the debugging process is indicated. The script execution progress displays the current status of the script execution. After the execution, we will get the required output.

Debugging process is important for every program or script.QlikView Script Debugging is conducted by the debugger tool embedded in the script editor. It will use features like a breakpoint, tracing script to make sure that the script is debugged efficiently.