In QlikView, the relational database schemas are of two types. One is the Star schema and the other is the Snowflake schema. But, before going to learn the two different schemas, first, we should know what kinds of tables were used to store the data?

So, there are two types of tables:

The Fact table is a table that contains numeric data or measurable attributes of data such as ID, keys, etc, that are connected with the dimension table across the data model. The fact table is placed at the center of the Star schema or the Snowflake schema bounded by dimension tables in a data model.

The Dimension tables are those tables that consist of descriptive or textual attributes of data such as Product ID, Product name, Manager ID, Manager name, etc., Each dimension table describes the data of that particular table. For e.g., If a dimension table gives information about a product, it provides the data particularly on that product itself.

In the figure, the highlighted ones are the Dimension tables and the one which is connected with all the dimension tables is the Fact table. As a title of this article, we will learn What is a Star schema? What is a Snowflake schema? And What are the difference between them? Let’s get started. 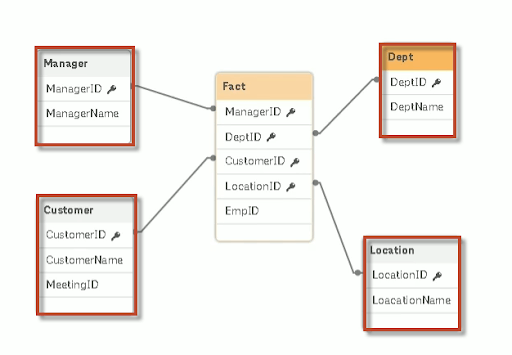 What is Star Schema?

A star schema data model consists of one main Fact table that is connected with multiple dimension tables through the primary keys. This type of schema is commonly used for Online Analytical Processing (OLAP) which provides high speed. The resulting star schema has a spoke, or hub, or a Star-like representation.

Simply, a star schema is a structure where through dimension tables are connected with the center situated Fact table. The fact table consists of foreign keys or the primary keys of all the dimension tables.

As shown in the figure, the center table (Sales details) represents the Fact tables, and tables connected across the fact table are the dimension tables (Product details, Place details, customer details, order details). 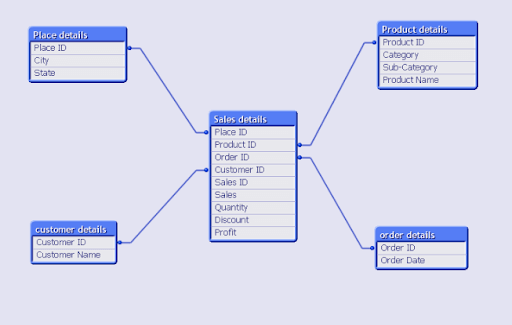 E.g. Star schema with details of sales as Fact table and other details regarding sales like Product details, place details, Customer details, and Order details as Dimension tables.

The advantages of the star schema are as follows:

The disadvantages of the star schema are as follows:

What is a Snowflake Schema?

Unlike star schema, the Snowflake schema organizes the data inside the database in order to eliminate the redundancy and thus helps to reduce the amount of data. This kind of schema is commonly used for multiple fact tables that were a more complex structure and multiple underlying data sources.

Advantages of the Snowflake schema

The advantages of snowflake schema are as follows:

Disadvantages of the Snowflake schema

In QlikView, the preferred schema is the star schema as it provides queries that run faster. The structure allows us to load large batches of data quickly. It is a flexible model and deals with complex scripts easily. It also provides good RAM consumption. But selecting a suitable schema depends on the quantity of data. In this article, we have learned the core details of Star schema and Snowflake schema. Hope you find relevant information.