Splunk CIM is simply called as Splunk Common Information Model having a set of fields & tags which probably will explain the information about the denominator of a domain of interest. Mostly, it is implemented as the documentation on the Splunk docs website & also JSON data model files in the respective add-on. This Splunk CIM add-on is mainly used when modeling data or building apps for ensuring the compatibility between the apps or else takes the advantage of these respective data models to report as well.

The Splunk CIM is considered as the semantic model that can also be shared which will help the users to extract the value from required or given data. In most of the cases, it is used as an add-on which mainly consists of the various documentation process, data models & different tools which will also give support to the normalized treatment of data in a consistent way for maximum efficiency at search time. The CIM-add on will also have a wide range of collection of pre-configured data models were at the time of search operation that respective data can be used. Each data models in this Splunk CIM model will consist of a pack of the given field names & also tags that will have a clear explanation domain of the interest in the least common denominator. These respective data models can be used to normalize & check the data at a search time, helps in the creation of new data reports, Visualization with Pivot and accelerate key date while the time of searchers.

The below list add-on has also come up with various tools in which it mostly generally helps to ensure to have an analysis or else validation & alerting easier and more consistent way. These tools also have a custom command for Splunk CIM validation & having a little bit of common action model for various custom alert the given actions respectively. 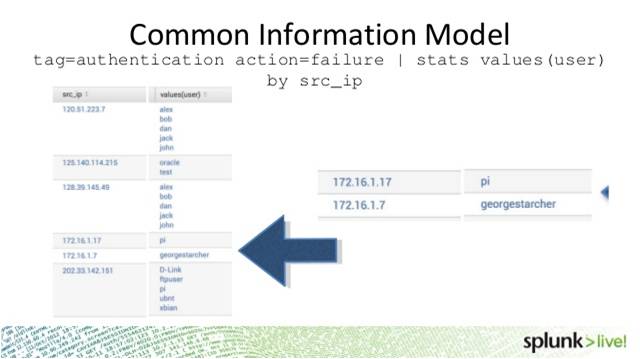 The Splunk CIM will probably normalize the data for matching a basic common standard. In a first, this function will be using the similar field names and also event tags for the same number of events from the various sources or else vendors. This Splunk CIM will be acting similar to the search-time schema that allows you to explain more about relationships in the event data & will leave the raw machine with the given data intact. Users can easily develop reports, correlations searches & dashboards for presenting a unified view of a data domain after the data gets normalized from various multiple sources. With the help of other Splunk applications like Splunk Enterprise Security & the Splunk App for PCI compliance, you can display your required data in the dashboards. The dashboards & other reporting tools in apps which support CIM compliance where the data is displayed in the tags with a normalized way and the fields defined by CIM.

The Splunk CIM add-on will be a fully based package with Splunk Enterprise Security, the Splunk App for PCI compliance & other Splunk IT service intelligence.

Related Page: What are Splunk Apps and Add-ons and its benefits?

How this Splunk CIM compared with the DMTF CIM?

The Splunk CIM is an independent model standard & is also not officially connected with the Distributed Management Task Force CIM. This DMTF CIM is considered to be hierarchical, higher complex, and higher comprehensive & has a lot of difference from the Splunk CIM. In this DMTF CIM, all the models will be inherited through one and only one parent node and along with the given child nodes for each model and then to have extra child nodes for maintaining the sub-concepts. In a step to define more possible configurations, the DMF’s individual sub-nodes can be very complex with multiple branches.

1. The foremost step is to download the Common Information Model add-on from Splunk base  https://apps.splunk.com/app/1621/.

2. Then, review the indexes that are defined in CIM.

3. The cim_summary index definition will always be deprecated. However, it will not be included for backward compatibility with upgraded versions of Splunk Enterprise Security & the Splunk App for PCI Compliance. With the help of common action model alerts & auditing, the cim_modactions index definition will also be used in an efficient manner. Then, assign the appropriate Roles to search the index. Install the Splunk Common Information Model Add-on to your search heads only & can install this add-on to indexers results in redundant data model acceleration overhead if acceleration is enabled.

In the Splunk CIM, most of the users will be using and have a great command over Splunk and the add-ons which are said to be used in a common way in these methods to have a new and reliability data source in the respective platform. Mostly, all the add-on skilled developers will be concentrating on the designing of their add-ons which will be used by the Splunk CIM model in the best and regular way. Splunk add on development will make sure to deliver the information about lookups, extractions and other event types which are needed to map data to the CIMs & also allow the customers to use the new data source in pivots, data models and CIM-based apps.

This Splunk CIM model will not have an add-on which needs not required for using mostly the add-on simple features like data collection, pre-built panels, or else custom commands. Users can also concentrate or use the given individual add-ons with the respect of the users or else owner, by avoiding the installation of the Splunk CIM add-on, in a bid to reject the mapping of the respective data to the CIM model.

Users can also install the Splunk CIM add-on to the search heads in a bid to have more advantage that is provided in the CIM mappings and also in the add-on. If most of the users are trying to have an usage of the add-on with one of the apps then you do not need to install the Splunk Common Information Model add-on separately as well.