Java is a hugely popular and incredibly rich programming language. Talend is a Java Code Generator that makes use of many open-source Java libraries, so this means that Talend functionality can easily be extended by integrating Java code into Talend jobs.

The Java representation allows you to transform Java object instances. You can import Java classes individually, from a folder, or in a JAR file, and the Java importer will create structure definitions from each class. At runtime, you can provide Java object(s) as the source(s) of a transformation or accept them as the result(s).

This section contains recipes that show some of the techniques for making use of Java within Talend jobs.

Introduction to How to Use Java In Talend

For many data integration requirements, the standard Talend components provide the means to process the data from start to end without needing to use Java code apart from in tMap.

For more complex requirements, it is often necessary to add additional Java logic to a job, and in other cases, it may be that adding custom Java code will provide a simpler or more elegant or more efficient code than using the standard components.

Function tJava enables you to enter a personalized code in order to integrate it in Talend program. You can execute this code only once.

Purpose tJava makes it possible to extend the functionalities of a Talend Job through using Java commands.

The tJava component allows one-off logic to be added to a job. Common uses of tJava include setting global or context variables prior to the main data processing stages and printing logging messages.

If you examine the code, you will see that the Java code is simply added to the generated code as it is. This is why you must remember to add; to the end of the line to avoid compilation errors.

Although this recipe is centered on the use of tJava, it also acts as a convenient means of illustrating how the context and globalMap variables can be directly referenced from within the majority of Talend components.

Open jo_cook_ch05_0010_tJavaContextGlobalMap, then open the context panel, and you should see a variable named testValue.

The context and globalMap variables are stored as globally available Java hashMaps, meaning that they are keyed values. This enables these values to be referenced within any of the other components, such as tMap, tFixedFlowInput, and tFileInputDelimited.

This recipe shows variables being set in a one-off fashion using tJava. It is worth noting that the same principles apply to tJavaRow. Because tJavaRow is called for every row processed, it is possible to create a global variable for a row that can be referenced by all components in a flow. This can be useful when pre and post field values are required for comparison purposes later in the flow. Storing in the globalMap variables avoids the need to create additional schema columns.

Function tJavaRow allows you to enter a customized code that you can integrate into a Talend program. With tJavaRow, you can enter the Java code to be applied to each row of the flow.

Purpose tJavaRow allows you to broaden the functionality of Talend Jobs, using the Java language.

The tJavaRow component allows Java logic to be performed for every record within a flow. 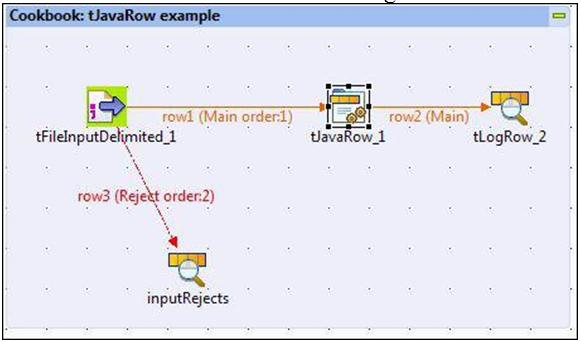 Once the output fields have been defined, the Generate code button will create a Java mapping for every output field. If the names are the same, then it will map correctly. If input fields are not found or are named differently, then it will automatically map the field in the same position in the input or the last known input field, so be careful when using this option if you have removed fields. In some cases, it is best to propagate all fields, generate the mappings and then remove unwanted fields and mappings.

Also, be aware that the Generate Code option will remove all code in the window. If you have code that you wish to keep, then ensure that you copy it into a text editor before regenerating the code.

As you can also see from the code that was added, it is possible to use Talend’s own functions (StringHandling.EREPLACE, Numeric.sequence) in the Java components along with any other normal Java syntax, like the if statement and startsWith String method.

Importing JAR files to allow the use of external Java classes

Occasionally, during development, it is necessary (or simpler) to make use of Java classes that aren’t already included within Talend. These may be pre-existing Java code such as financial calculations or open-source libraries, which are provided by The Apache Software Foundation.

In this example, we will make use of a simple Java class ExternalValidations and its ExternalValidateCustomerName method. This class performs the following simple validation: 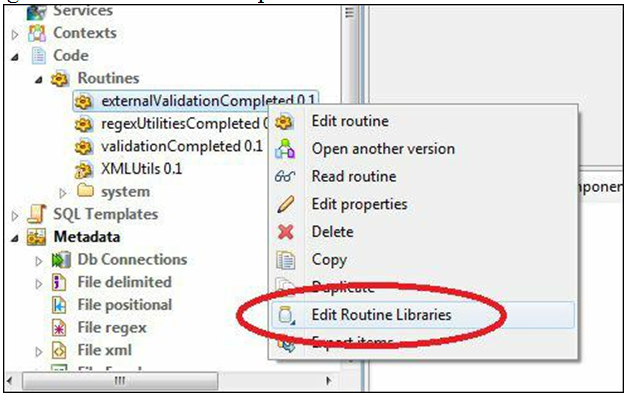 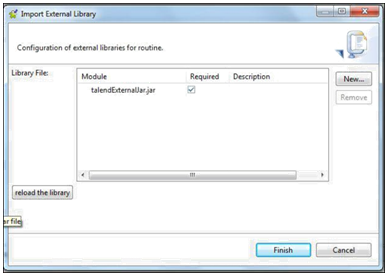 If you get an error when running this job, then it is possible because the new class has not been set up as a dependency automatically.

The code routine external validations is a dummy routine used to attach the external jar file and make it available for all jobs in the project.

In order to use the classes in the JAR file, it is necessary to add an import statement within the tJavaRow so that the code knows where to find the methods.

An alternate method of achieving this for just a single job is to use the tLibraryLoad components at the start of the job to define the location of the external libraries and the JAR files required.