One of the most frequent queries in SQL Developer interviews is about SQL Joins. These inquiries are based on various SQL Joins and how they are used. Using a shared field, a SQL Join statement joins information or rows from two or more tables. RDBMS is still a widely used management system for databases in organizations all over the world, so SQL questionnaire items are commonly questioned in technical interviews. In addition to other places, interviews can include questions about SQL Joins for data analysts, data scientists, and data engineers.

The demand for SQL Joins professionals is quite high in the market, therefore, we are certain these set of questions would vastly help you in bagging that dream job.

For better understanding, we have divided these SQL Joins interview questions into categories for better retention and durability as per what is required. They are:

1. How can a table be joined to itself?

A SELF JOIN in SQL is a different kind of join that links one table to another table. It is essential to have at least one column (let's say X) that acts as the primary key and one column (let's say Y) that includes values that can be matched with those in X in order to perform a self-join. Column Y's value may be null in some rows, and Column X's value need not match Column Y's value exactly in every row.

2. What does SQL's Merge Join mean?

The Merge join, also referred to as the Sort-Merge join, is a join operation used in Relational Database Management Systems applications. Finding each distinct value of the join characteristic and the set of tuples in each relation which output that value is the fundamental trick of a join process.

This is a more difficult but intriguing database design query. Typically, a single FOREIGNKEY is used to structure one-to-many relationships.

4. What are Nested Joins in SQL?

Each tuple in the external join relation is considered by this type of join, after which it scans the entire inner join relation, adding any tuples that satisfy the join-condition and displaying the results.

5. What distinguishes a full join from a cross join?

A Left Outer Join and a Right Outer Join combined form a Full Outer Join. When the ON condition is not met, it inserts NULL values and returns all rows from both tables which match the query's WHERE clause. While a cross-join returns every possible combination of all rows by creating a cartesian product between both the two tables.

6. What distinguishes a cross join from a natural join?

In contrast to a natural join, which relies on all of the columns in both tables possessing the same name and data type, a cross join creates a cross product, or cartesian product, of two tables.

7. What is the purpose of Inner join?

A list of rows in which there is a fit in both of the specified tables is returned by an INNER JOIN. Since it is the default join type, an INNER JOIN will be employed if you simply type JOIN without adding any additional conditions.

8. What is the purpose of full join?

The results from the left and right tables in the statement will be returned by a FULL JOIN. All data will still be pulled in if there are instances where the rows from the left table and the right table do not match, or vice versa, but SQL will issue NULL values in all unmatched columns.

9. What distinguishes an LEFT JOIN from a RIGHT JOIN?

Both RIGHT JOIN and LEFT JOIN show the outcomes of a JOIN query that includes every record in a particular table. The only distinction is that RIGHT JOIN exhibits all records just on the right table while LEFT JOIN only displays records from the query's left table.

Using columns that have the same name and data type to join tables is known as a NATURAL JOIN. The common columns in the two tables that have been joined are used to create an implicit JOIN clause for you when you use the NATURAL JOIN clause.

A type of join called a "natural join" joins tables predicated on columns that share the same name and datatype. To perform a natural join, there should ideally be a common characteristic (column) between two tables.

Union: The word "UNION" in SQL is used to group the outcomes of multiple SELECT statements. You can combine data into new vertical rows using union. All queries must comply with UNION's requirements regarding column ordering and numbering. Here is a picture of what a union might look like.

12. Is the equality of the Join condition a requirement?

No, non-equi conditions can also exist in joins. With common comparative operators like, =, >, >=,!=, and BETWEEN, join provisions can be used. Non-equi joins can be helpful in a number of situations, such as listing records, listing unique pairs, and locating duplicate records.

13. Describe the variations between a cross join and a natural join.

14. Describe Cursor. What is a cursor used for?

Online transaction processing, or OLTP, enables enormous teams of individuals to carry out a sizable number of data processing in real-time, typically over the internet. When data is modified, added, removed, or queried in a database, a database transaction takes place.

16. What distinguishes OLTP and OLAP from one another?

17. How can I make empty tables that share another table's structure?

It is possible to generate empty tables with the same structure by employing the INTO user to fetch the documents of one table into a new table whilst also setting a WHERE stipulation to false for all entries. Since the WHERE clause is in effect, SQL as a result creates a new table with a copy structure to accommodate the fetched entries, but no data is stored into the new table.

In a relational database, a table is a group of data elements arranged in rows and columns. A table can be used to represent relationships in a useful way. Tables are the most fundamental type of data storage.

A clause or statement known as a SQL Join is used to incorporate two or more tables based on the common fields.

Some examples of SQL Joins include the following:

21. What distinguishes a full join from a cross join?

A Full Outer Join is created by combining a Left Outer Join and a Right Outer Join. The WHERE clause of the query is returned for each row in both tables. The return value is NULL if the ON condition is not fulfilled. A cartesian product among two tables is produced by a cross join, which returns all different permutations of all rows from both tables.

A natural join establishes an implicit join clause based on the shared attributes of the two tables. The name of a shared attribute is the same across both tables. A comparison operator is not required for a natural join, in contrast to an equi join.

In this kind of join, tables are combined based on model can effectively in the designated columns. Some equi join features are:

25. What role do SQL joins play in database management?

The following are some reasons why SQL joins are crucial for database management:

Merge join joins two sorted sets of data to use an FULL, INNER, or LEFT join to create a single output stream. Of all the operators, it is the best at joining data. For the purposes of a merge join, it is necessary for both inputs to be straightened as well as for the joined columns' meta-data to match. Users cannot combine columns with various data types. A column with such a character data type cannot be combined with a column with a numeric data type.

The investigate input or inner table, like any other join, and the build input are needed for the hash join or outer table. In a hash join, a hash table is used to find rows in two tables that match. When no other join is preferred, the hash join is an option or possibly due to the absence of sorting or indexing etc. When joining large, unsorted, non-indexed data sets, hash joins work best.

28. Can you describe the SQL nested join?

A JOIN is one of the mechanisms we use to physically join two tables together in a relational database, and a recursive join is one of the most straightforward approaches. A Nested Join essentially uses one having joined table as an external input table and the other as an inner input table. A Nested Loop Join involves retrieving one row from the outer table, searching for it in the inner table, and repeating this process until all of the production rows from the outer table have indeed been found.

Let's talk about the features of SQL Joins 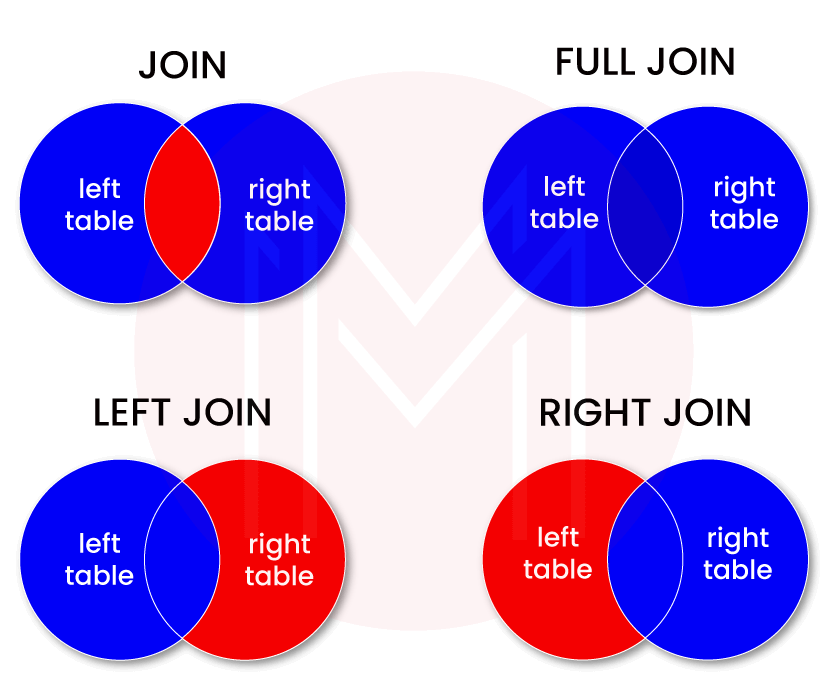 In relational databases like SQL Server, Oracle, MySQL, and others, we store our data in numerous logical tables that are connected by a common key value. As a result, we frequently need to combine data from two or more tables to produce the desired output in accordance with certain criteria. With the help of the SQL JOIN clause, we can easily obtain this kind of data in SQL Server. With an example, this article provides a thorough explanation of JOIN and its various types. We can recover data from two or more linked tables and combine it into a useful result set by using the join clause. Using a SELECT statement and a join condition, we can join the table.