A before-and-after illustration is the best way to compare the internal behavior of SQL Server when transactions are processed using traditional disk-based tables as opposed to memory-optimized tables. Figure 2.4 shows how a traditional transaction from a client application is processed using disk-based tables. Figure 2.6, shown later in the topic, demonstrates the processing behavior when the same tables are migrated to memory-optimized tables and the In-Memory OLTP engine is used. Both figures also illustrate how tightly coupled In-Memory OLTP is with the Database Engine component. 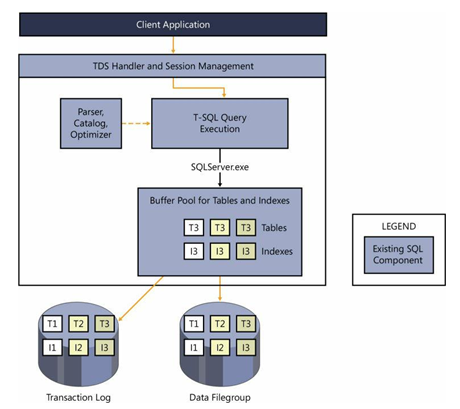 In Figure 2.4, the SQL Server Database Engine communicates with the client application by using a Microsoft communication format called a Tabular Data Stream (TDS). The transaction goes through a parser and a catalog and an optimizer, and the T-SQL query is compiled for execution. During execution, the data is fetched from storage into the buffer pool for changes. At the time, the transaction is committed, the log records are flushed to disk. The changes to the data and index pages are flushed to disk asynchronously.

Figure 2.4 depicts a traditional scenario using disk-based tables. Although the processing times are sufficient in this example, it is not hard to conceive that further optimization of the database application’s performance will be needed one day. When that day comes, organizations can use the native tools in SQL Server to help them determine whether In-Memory OLTP is right for their environment or not. Specifically, organizations can use the Analysis, Migrate and Report (AMR) tool built into SQL Server Management Studio. The following steps can determine whether In-Memory OLTP is right for an organization:

Ultimately, the AMR tool analyzes the workload to determine whether In-Memory OLTP will improve performance. It also helps organizations to plan and execute their migration to memory-optimized tables. In addition, the report provides scan statistics, contention statistics, execution statistics, table references, and migration issues to ensure that organizations are given a wealth of information to further assist them with their analysis and eventually their migration.

The memory-optimization advisor allows you to:

After running the AMR tool and identifying a table to port to In-Memory OLTP, you can use the Table Memory Optimization Advisor to help migrate specific disk-based tables to memory-optimized tables. Do this by right-clicking a table in Management Studio and then selecting Memory Optimization Advisor. This step invokes a wizard that begins conducting validation tests and providing migration warnings, as illustrated in Figure 2.5. The wizard also requires users to make a number of decisions about memory optimization, such as selecting which memory-optimized filegroup to use, the logical file name, and the file path. Finally, the wizard allows users to rename the original table, estimates current memory cost in megabytes, and prompts users to specify whether to use data durability for copying table data to the new memory-optimized table. 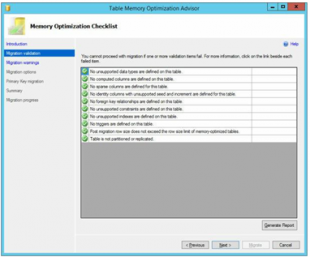 A new area of memory is added for memory-optimized tables and indexes. In addition, a full suite of new DMVs, XEvents, and instrumentation is also added, allowing the engine to keep track of memory utilization. Finally, a memory-optimized filegroup, which is based on the semantics of FILESTREAM, is also added. Access to memory-optimized tables can occur via query interop, natively compiled stored procedures, or a hybrid approach. In addition, indexes for In-Memory OLTP are not persisted. They reside only in memory and are loaded when the database is started or is brought online.

Query interop is the easiest way to migrate the application to In-Memory OLTP and access memory-optimized tables. This method does not use native compilations. It uses either ad hoc interpreted Transact-SQL or traditional stored procedures, which is the approach depicted by option 1 in Figure 2.6. As an alternative, natively compiled stored procedures are the fastest way to access data in memory-optimized tables. This approach is depicted by option 2 in Figure 2.6. 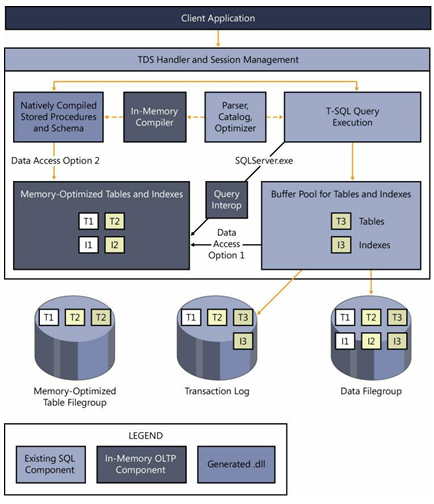