In the next few sections, we shall discuss In-Memory OLTP fundamentals, architecture, concepts, terminology, hardware and software requirements, and some myths about how it is implemented in SQL Server 2014. 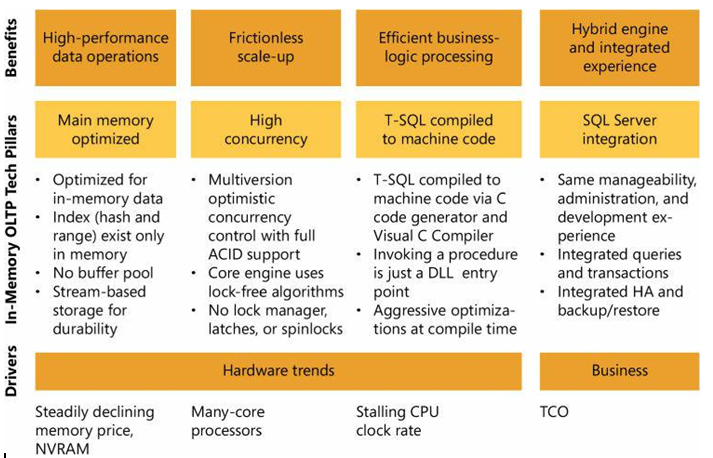 As a result of the steady decline in the price of memory and the rapid rate at which the size of memory was growing, putting tables in main memory became feasible, thereby replacing the need to place and access tables on disk. With this change, came a significant reduction in the time required to gain access to tables, because the pages were no longer required to be read into the cache from disk. New functionality, such as hash indexes and non-clustered range indexes, can exploit data that is in physical memory rather than on disk, which allows for faster access and higher performance in data operations.

The SQL Server product group recognized that if it could reduce the number of instructions needed to execute the same logic, it could do the same work at a lower processing time. The product group implemented this idea of transforming SQL stored procedures to a C program and then compiling the program into a DLL by using the Visual C compiler. The resulting machine code replaced stored procedures and the usual interpretation of logic through query execution. This made it possible to run a stored procedure by using fewer instructions, leading to more efficient business-logic processing that was significantly faster. With the optimization in processing time, internal testing at the lower level of the storage engine verified that, machine code could reduce the instruction count by 30 to 50 times, which resulted in a proportional increase in throughput and in lower latency.

Here is a partial list of some of the other TSQL constructs that cannot be used in a natively compiled stored procedure:

SQL Server has scaled extremely well because of the performance and scalability improvements made on it over the past releases. Unfortunately, certain application patterns— for example, a last page insert in the clustering key order or concurrent updates of hot pages—still suffered latch contention and did not scale as well as a result.

When many people attempt to modify data in a database at the same time, a system of controls must be implemented so that modifications made by one person do not adversely affect those of another person. This is called concurrency control.

The additional improvements implemented through In-Memory OLTP in SQL Server 2014 allows for higher concurrency. First, the product group did away with page structures for accessing memory-optimized tables. This means that no paging or latching occurs to create bottlenecks. Second, the core engine uses lock-free algorithm structures that are based on multiversion optimistic concurrency control with full ACID (atomic, consistent, isolated, and durable) support. These improvements remove common scalability bottlenecks and provide high concurrency and frictionless scale-up opportunities to increase overall performance when memory–optimized tables are used.

Related Page: How To Create SSIS Package In SQL Server 2014

Microsoft Integration Services is a platform for building enterprise-level data integration and data transformation solutions. You use Integration Services to solve complex business problems by copying or downloading files, sending e-mail messages in response to events, updating data warehouses, cleaning and mining data, and managing SQL Server objects and data. The packages can work alone or in concert with other packages to address complex business needs. Integration Services can extract and transform data from a wide variety of sources such as XML data files, flat files, and relational data sources, and then load the data into one or more destinations.

Here, the SQL Server product group decided that In-Memory OLTP should be easy to consume and that performance-critical tables should take advantage of this feature. What evolved from this idea is an In-Memory OLTP engine that is fully integrated into the SQL Server Database Engine and managed with a familiar set of tools. People who are familiar with SQL Server can quickly make use of the benefits of In-Memory OLTP because the management, administration, and development experiences are the same. Moreover, In-Memory OLTP works seamlessly with other features, such as Always On Availability Groups, Always On Failover Cluster Instances, replication, backups, and restores.

This is the traditional way through which SQL Server has stored data since the product’s inception. Data in a table is stored in 8-KB pages and read and written to a disk. Each table also had its own data and index pages.

In this process, interpreted Transact-SQL batches and stored procedures are used instead of a natively compiled stored procedure when accessing data in a memory-optimized table. Interop is used to simplify application migration.

Many use cases show the benefits of In-Memory OLTP. Consider these scenarios:

Before moving on to the next section and walking through some In-Memory OLTP examples, it’s useful to rectify some of the misconceptions surrounding In-Memory OLTP.