OpenStack Networking provides a rich tenant-facing API for defining network connectivity and addressing in the cloud. The OpenStack Networking project gives operators the ability to leverage different networking technologies to power their cloud networking. It is a virtual network service that provides a powerful API to define the network connectivity and addressing used by devices from other services, such as OpenStack Compute. It has a rich API that consists of the following components.

When using VlanManager to separate tenants, we can manually assign VLANs and network ranges to them by creating a secure multi-tenant environment. We can also have OpenStack to manage this association for us so that when we create a project it automatically gets assigned to these details.

To begin with, ensure you’re logged in to the Controller server (our OpenStack VirtualBox Virtual Machine, controller, created in, Starting Openstack Compute). If this was created using Vagrant, you can log into this box using the following command: 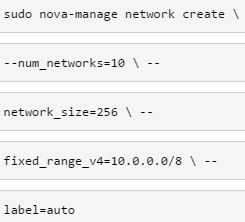 You can specify an alternative VLAN start ID on the command line by adding in the —vlan=id option, where an id is a number.

By specifying the —num_networks option and specifying the —network_size option (the number of IPs in each of the created networks), we can tell our OpenStack environment to create multiple networks within the range specified by — fixed_range_v4. When projects are created now, rather than having to manually associate an address range with a tenant, they are automatically assigned a VLAN, starting from the –vlan_start ID, as specified in /etc/nova/nova.conf.

To ensure that our OpenStack environment is able to separate traffic from one tenant to another, we assign different fixed ranges to each. When a fixed network is no longer required, or we want to assign a particular tenant to a specific network, we can use the nova-manage command to modify these details.

To begin with, ensure you’re logged in to the OpenStack API server as well as to a client that can access the keystone environment.

To assign a particular network to a tenant, carry out the following steps:

An example of running the previous commands is as follows:

An example of running the previous commands is as follows:

When configuring tenants in our OpenStack environment, it is recommended (although not a requirement) to have their own private (fixed) range assigned to them. This allows for those instances in each particular tenant to be kept separated through their different ranges along with appropriately set security group rules.
The syntax to modify a network is as follows: