Munin the monitoring tool surveys all your computers and remembers what it saw.

Munin Monitoring System is one of the popular computer systems, network, and infrastructure monitoring tools. With Munin, real-time information about the servers, applications, services, SANs, network, and many more resources is available in graphs through a web interface. And Munin is easy to set up and deploy with its plug-and-play capabilities, and coupled with the fact that it’s free and open-source, making it a popular monitoring tool for web servers and hosts.

Munin actually consists of two parts, namely Munin Master and Munin node. Munin Server is the data gatherer and grapher which also hosts the software website. The Munin Server will periodically poll all the nodes in your network, it’s aware of for data, which is, in turn, will use to create graphs and HTML pages for viewing via a web browser. Munin Node is the agent that monitors and extracts data from the node it runs on and then passes the data to the server for further processing.

We will be configuring Munin on a server that has access to the OpenStack Compute environment hosts. Ensure this server has enough RAM, disk, and CPU capacity for the environment you are running. As a bare minimum in a test environment, it is possible to run this on a VM with 1vCPU, 1.5 GB of RAM, and 8 GB of disk space.

To set up Munin with OpenStack, carry out the following steps:

The Munin master is responsible for gathering data from Munin nodes. It stores this data in RRD, files, and graphs them on request. It also checks whether the fetched values fell below or go over specific thresholds (warning, critical) and will send alerts if this happens and the administrator configured it to do so.
It must be installed first, as follows: 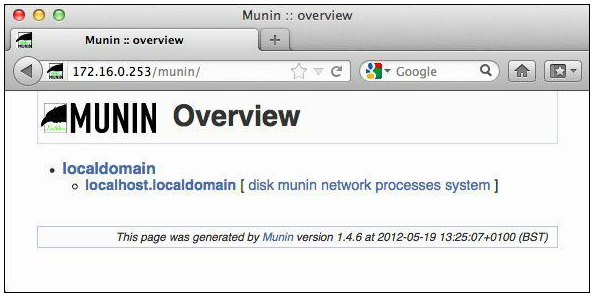 We can now proceed to configure the nodes that we want to monitor, for example openstack1 and openstack2.

With Munin master installed, and having a couple of nodes with graphs showing up on the Master, we can add the plugins to pick up the OpenStack services and graph them. To do this, we check out some plugins from GitHub.

Munin is an excellent, open-source networked, resource-monitoring tool that can help analyze resource trends and identify problems with our OpenStack environment. Configuration is very straightforward, without of the box configuration providing lots of very useful graphs from RRD (Round Robin Database) files. By adding in a few extra configuration options and plugins, we can extend this to monitoring our OpenStack environment.
Once Munin has been installed, we have to do a few things to configure it to produce graphed statistics for our environment: 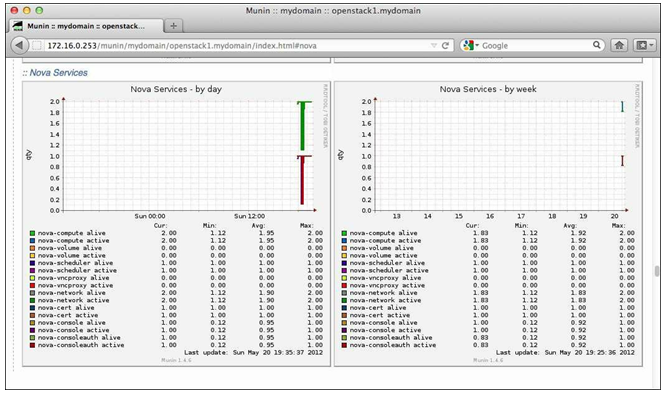