Azure DevOps: A detailed and practical guide on DevOps from basics to advance

Garnering over 15 years of learning and investment in providing tools for supporting software development teams, Azure DevOps is well equipped to handle DevOps. Initially, the visual studio team system was developed into Azure DevOps and released in 2018. Azure DevOps is implemented both on the off-premises as Azure DevOps Server and an online one called Azure DevOps services. But before going on with understanding it, you need to know some basics about DevOps.

DevOps is a development methodology that is intended to decrease the time of development all while providing the continuous delivery of high-quality software. It is the combination of two words: Software Development (Dev) and IT Operations (Ops).

An exhaustive list of even important terms will take a lot of space. Let us see some of the most important and basic terms used in Azure DevOps projects. Agile: It is also another development methodology of software production. While Agile and DevOps sometimes are used interchangeably, they are not the same. Continuous Integration: It is the technique of continuously merging source code updates into one mainline in order to prevent conflicts. Automated Builds: They enable us to compile all the source files and package the resulting files and producers’ installers.

DevOps is the combination of practices, tools, and philosophies that enable rapid development and deployment of enterprise and consumer applications. DevOps began with cloud computing, which made it possible to allocate resources quickly and inexpensively. Cloud maximizes the innovations under DevOps by combining development, testing, and deployment tools in the cloud.  Traditionally,  it doesn't offer the flexibility that the cloud has to offer while delivering apps that need to be deployed faster and monitored through the development life cycle.

DevOps combines and merges the development team and IT Ops team together to work closely in the application lifecycle.

Become a certified Microsoft Azure developer with Mindmajix -  A Global online training platform: “Azure Training”  Course that will make you achieve excellence in the domain.

Quality Assurance and Security teams are also tightly integrated and work with the DevOps team. Azure DevOps team practices to automate all development and operations processes. In Azure DevOps, the technology stack and tools are reliable, evolve quickly, and help engineers to accomplish tasks quickly. For instance, continuous deployment of code from GitHub of Visual Studio Team Services or provisioning cloud infrastructure for application deployment. Normally these would have required help from other team but as Azure DevOps integrate these into a single unit this increases development velocity.

With the end to end solutions that Azure provides, software development teams can implement the DevOps practices in all the phases of the development. But in order to learn DevOps, developers need certain skills and knowledge. Let us see each of them:

This would be an obvious requirement as Azure DevOps is a great collection of products and services that would help you to implement DevOps methodology. So, you need to learn all the major DevOps tools like Jenkins, Docker in order to learn Azure DevOps

Using automation, you can make the development and deployment processes faster. Good knowledge of automation technologies and tools is thus very important for DevOps.

Coding and scripting skills in many different languages like Ruby, Python, Perl, and others is very important for Azure DevOps developers as they are responsible for writing manual codes or replacing a manual process.

The reason cloud is so important as it provides a good place to backup all the data and also helps in orchestration which offers better and co-ordination in the automation process. It helps in developing and deploying applications faster.

Azure DevOps provides powerful services that will help in the testing of applications. In order to use them well, you need a good knowledge of testing and different approaches within it as all reputed companies use different methods of testing.

The main reason that Azure DevOps is so important to learn is that it combines the greatness of the cloud and the process of DevOps. By learning Azure DevOps, you can use it for yourself to build the applications efficiently or else join in an organization that is actively seeking developers who are proficient in Azure DevOps for a great role!

The Azure platform is full of flexible DevOps workflows. Microsoft provides the following services for DevOps in their Azure cloud platform. 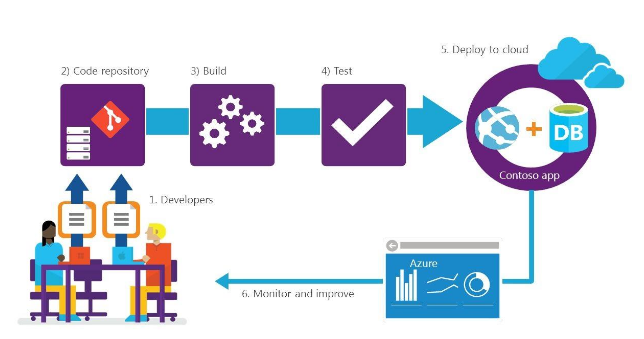 If your code is open source and hosted in public Github, you can use Continuous Integration tools like Travis CI or CircleCI for code testing and deployment

There are two general kinds of pricing in Azure: Individual services and also taking a user license. For individual services, You can have one free Microsoft hosted CI/CD up to 1800 minutes and also one free self-hosted CI/CD with unlimited time. You can use up azure artifacts of 2GB storage worth. But after the free parallel jobs, you need to pay around Rs. 2500 for Microsoft hosted jobs and around Rs 1000 for self-hosted jobs. You have to pay an amount of around Rs. 150 after the free storage too.

Microsoft Azure DevOps provides a lot of services to aid the development of software in all the phases of its lifecycle including planning the work, collaborating during development and also while building the applications. In order to understand how it does this, we need to discuss its infrastructure.

Azure DevOps infrastructure comes with a lot of components that do specific jobs. Let us discuss each of them in detail.

By using Azure Test plans, you can test your application manually and also run exploratory tests. You can perform unit and function tests as well. You also have continuous testing enabled! Also with Azure test plans, you can request, provide, and track feedback.

The Azure DevOps pipeline can be used in creating and testing your code automatically and also in giving access to other users. As it is a combination of Continuous Integration and continuous delivery, it can produce consistent and good quality code with using both of them.

To say simply, artifacts are executable files and thus contain only machine instructions rather than human-readable higher-level code. A Feed is something like a container of packages that helps in consumption and publishing. Now coming to Azure artifacts, it is a store that contains all your artifacts which you have produced during development and deployment. They provide a fast and secure feed of binary packages that are also easy to use. You can also use multiple feeds for organization and control of access to your packages.

Start by going to the Azure portal and searching for DevOps. Then click on Create a new organization and then continue on giving the required details until you created the project. You can add new members to this project by going to project settings and then security. Here, you need to click on the team and then on members where you can add.

Next, create a Git repository and push it to azure server. You can use this for collaborating with other members of the team. You can see all the repos and commits under the repos in the azure repos. If you want to add new work, go to boards and select a new work item. You can also use the boards to assign a new task to the user from here.

Now go to the pipelines and start a new one specifying the resource where your code is. After that, your default pipeline would be created. You can write down any tasks you want to perform and click run to execute them.

Another main thing that is remaining is testing. There are different ways of testing, let us go for URL tests for now. After loading and creating a new test, all you need to do is to fill all the required details and run the test!

That briefly covers basic aspects of all there is in Azure DevOps!

With the practical applications of DevOps increasing day by day, the future of Azure  DevOps and the engineers proficient in DevOps will be great. However, many things would change and improve with the DevOps. One of the main aspects would be that there would be a lot of containerization of software that applications would run from the cloud itself which could bring a dramatic shift in the world of DevOps! Hence choosing your Azure DevOps Organization plays a vital role.

If you are interested to learn Azure and build a career in Cloud Computing? Then check out our Microsoft Azure Certification Training Course at your near Cities