Azure Stack, Microsoft Azure is a cloud computing service by Microsoft (formerly known with a name – Windows Azure) for building, deploying, testing applications/services via a global network of data centres which are managed by Microsoft itself.

There is Platform as a Service (PaaS), Software as a Service (SaaS) and Infrastructure as a Service (IaaS) service offerings provided by Microsoft in this regard which support many programming languages that are available in the market as on today.

If you would like to Enrich your career with a Microsoft Azure certified professional, then visit Mindmajix - A Global online training platform: “Azure Certification Course” .  This course will help you to achieve excellence in this domain.

What is Azure Stack?

Microsoft’s Azure Stack is an on-premises variant of its public cloud offerings that are deemed important for pros in the market for one simple reason – that it gives its customers ways and means to use the most familiar cloud platform without pushing their specific sensitive data into the multi-tenant environments.

Azure Stack is a software that has been announced by Microsoft which is certified to run on a premium list of partners’ hardware and is intended to be a look-alike of Microsoft’s Azure public cloud.

One other interesting feature that we might have to take a note of, is that no other competitor to Microsoft Azure has anything like Azure Stack – considering the competitors like Amazon Web Services (AWS) and Google Cloud. 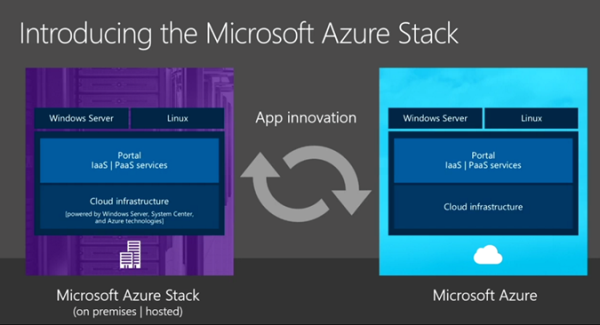 Microsoft can be coined as the first of the three biggies in the Iaas (Infrastructure as a Service) vendors that provide a hybrid cloud platform constituting the on-premises hardware and the bundled software with similar software management tools as observed in the Azure Public Cloud offerings.

Azure Stack was announced in the later months of 2015 and is made available to the customers to consume their services by the fall of 2015. Microsoft Azure Stack GA is right around the corner for its release that somewhere in mid-2017.

Microsoft has started providing various combinations of offerings for Azure Stack which are detailed as below:

Microsoft has its offering in two major ways to purchase the Azure Stack licensed software, one by “pay as you go” model and the other “pay as you use” model where the usage of the infrastructure and software will be charged.

What are Azure Stack’s Services?

The software is an amalgam of all the needed Infrastructure as a Service (IaaS) functions that can constitute the whole setup of a cloud platform which includes Virtual Machines, Storage space, Virtual Networking / Monitoring.

The authentication for the whole setup comes in the form of Azure Active Directory (AD).

Customers do possess access to huge variants of third-party applications from Azure Marketplace that includes OS images from organizations like Red Hat, SuSE and also templates that can be installed to run applications like Cloud Foundry, Kubernetes, and Mesosphere, etc.

On the hardware standpoint, Azure Stack runs on a hyper-converged infrastructure stack that is certified by either Microsoft or Vendor partners who are certified by Microsoft itself.

Finally, we have a compilation of all the services that you can opt from Microsoft Azure in various different combinations. Customers have the flexibility to choose amongst the available options that best suits their requirements.

Let us now take a look at the combinations available for choosing in Microsoft Azure Stack GA release (these are already discussed in the sections above, but have added them in a tabular form for quicker reference):

In this article, we have introduced you to Microsoft’s offering named Azure and also have tried to dig into many details of Azure Stack. We have tried to understand the overall features that are made available with the Microsoft Azure Stack. After going through the necessary details, as per the author of this article suggests is to get yourself acquainted with the 200$ worth free account with Azure Stack and then take a decision to get going with your business hosted on Azure Stack.

If you are interested to learn Azure and build a career in Cloud Computing? Then check out our Microsoft Azure Certification Training Course at your near Cities.