What Is SAS ETL Studio?

Sas ETL studio, a Java application, is a visual design tool that helps organizations quickly build, implement, and manage ETL processes from source to destination, regardless of the data sources or platforms.

Users can standardize metadata across the organization and perform in-depth transformations with minimal programming or manual work to meet enterprise data integration requirements and to support business and analytic intelligence.

SAS ETL Studio enables you to perform the following tasks:

SAS ETL Studio is an application that enables you to manage ETL process flows by allowing:

Learn more about our SAP BI Training Videos to get ahead in your career.

Optional Data Surveyor wizards can be licensed that provide access to the metadata in enterprise applications, such as

>>The metadata maintained by SAS ETL Studio is CWM (Common Warehouse Metamodel) compliant and portable to other CWM-compliant applications. Likewise, metadata from other CWM-compliant applications (that is, data modeling tools) can be imported easily into SAS ETL Studio.
>>For example, you could use a data modeling tool to create a model for a set of tables, save the model in CWM format, and then use the Metadata Importer wizard to import the model into a metadata repository. In SAS ETL Studio, you could view the properties of each table and verify that the appropriate metadata was imported. The tables could then be used in SAS ETL Studio jobs.

SAS ETL Studio is fully integrated with the data quality software from DataFlux Corporation. Both products now use the same Quality Knowledge Base (QKB), which contains rules, routines, and schemes necessary to integrate data quality into the ETL process.
The Process Library in SAS ETL Studio contains two data quality transformation templates: Create Match Code and Apply Lookup Standardization. These templates enable you to increase the value of your data through data analysis and data cleansing.

The SAS ETL Studio functionality is extended by Java plug-ins packaged with the product.
Further extensions can be implemented by

SAS ETL Studio can use different types of application servers: 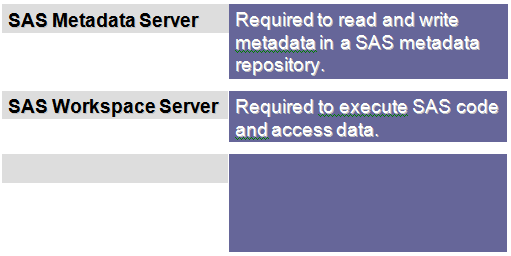