This SSIS tutorial gives you an overview and talks about the fundamentals of SSIS.

SQL Server Integration Services (SSIS) is the anchor in a growing suite of products that make up the Microsoft SQL Server Business Intelligence (BI) platform. What makes SSIS so important is without the data movement and cleansing features that SSIS brings to the table, the other SQL Server BI products can’t operate. In its simplest form, SSIS is an enterprise-level, in-memory ETL tool.

However, SSIS is not just a fancy wrapper around an import wizard. In a drag-and-drop development environment, ETL developers can snap together intricate workflows and out-of-the-box data-cleansing flows that rival custom coding and expensive million-dollar, third-party tools. The best thing about SSIS is that you have already paid for it when you license SQL Server.

In SQL Server 2012 release, Microsoft had focused on SSIS manageability, making it easier to deploy and execute. Also added in 2012 are robust new data cleansing components that help you standardize and detect data anomalies.

Furthermore, improvements to the development tools will help make SSIS developers more productive and help new developers get up to speed more easily. The SQL Server 2014 release uses a newer version of Visual Studio but all in all, it will feel much like SQL Server 2012.

Tools of the Trade

Most of this SSIS TRAINING will assume that you know nothing about previous releases of SQL Server SSIS. Instead, it takes a fresh look at SQL Server SSIS. The learning curve can be considered steep at first, but once you figure out the basics, you’ll be creating complex packages in no time. To provide an idea of how easy SSIS is to use, the following section looks at a staple tool in the ETL world: the Import and Export Wizard.

If you need to move data quickly from almost any OLE DB–compliant data source or flat file to a destination, you can use the SSIS Import and Export Wizard (shown below Figure). In fact, many SSIS packages are born this way, but most packages you wish to keep in a BI solution should not be created with the wizard.

The wizard provides a quick way to move data and perform very light transformations of data but does not create packages that use best practices. The wizard is available in all editions of SQL Server except the Local Database edition and Express. It enables you to persist the logic of the data movement into a package file.

The basic concept of an import/export wizard has not changed substantially from the days of DTS. You still have the option to check all the tables you want to transfer. In addition, however, you can also encapsulate the entire transfer of data into a single transaction. 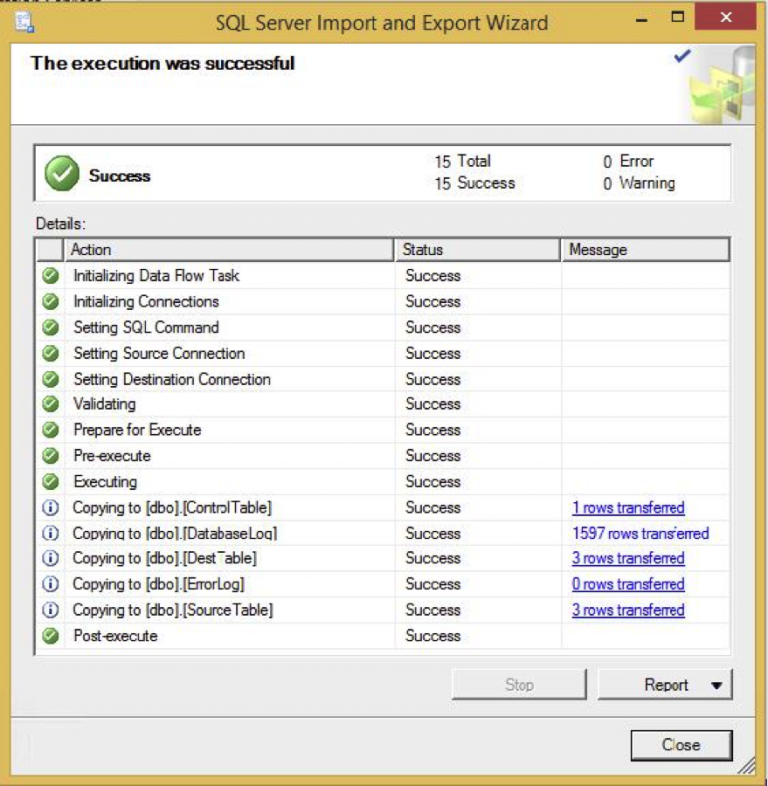 The SQL Server Data Tools (SSDT) was previously called Business Intelligence Development Studio (BIDS) in SQL Server 2008, and it is the central environment in which you’ll spend most of your time as an SSIS developer. SSDT is just a specialized use of the familiar Visual Studio development environment.

In SQL Server 2014, SSDT no longer installs when you install SQL Server. Instead, you’ll have to download and install the SQL Server Data Tools (Business Intelligence for Visual Studio) from the Microsoft website. Visual Studio can host many different project types, from Console applications to Class Libraries and Windows applications.

Although you may see many project types when you create a project, SSDT actually contains project templates for only Analysis Services, Integration Services, Report Server, and variants thereof. SSIS in particular uses a BI project type called an Integration Services project (see below Figure), which provides a development design surface with a completely ETL-based set of tools in the Toolbox window. 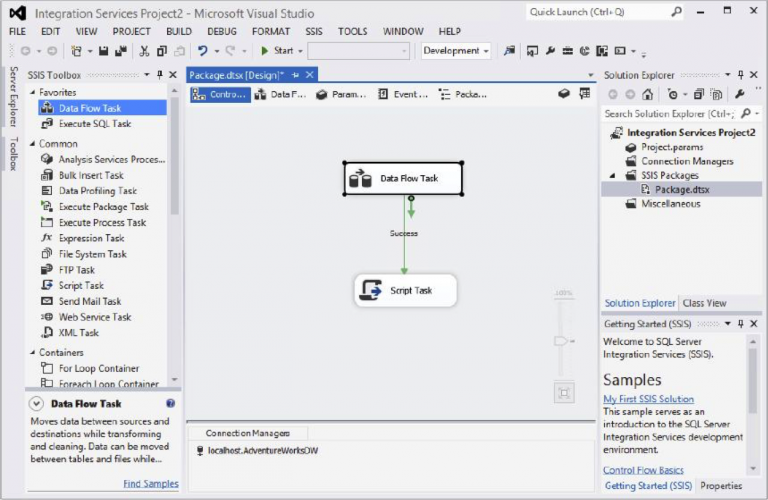 Microsoft has truly established SSIS as a major player in the extraction, transformation, and loading (ETL) market. Not only is the SSIS technology a complete code rewrite from SQL Server 2000 DTS, it now rivals other third-party ETL tools that can cost hundreds of thousands of dollars depending on how you scale the software and it is included free with the purchase of SQL Server 2014.

Free always sounds great, but most free products can take you only so far if the feature set is minimal or the toolset has usability, scalability, or enterprise performance limitations. SSIS, however, is the real deal, satisfying typical ETL requirements with an architecture that has evolved dramatically from earlier incarnations. At the time of this publication, SSIS held the world speed record of loading more than 2 terabytes in a single hour.

A core component of SSIS is the notion of a package. A package best parallels an executable program that you can write that contains workflow and business logic. Essentially, a package is a collection of tasks snapped together to execute in an orderly fashion. A package is also a unit of execution and development, much like a .NET developer creates programs or DLL files.

Precedence constraints are used to connect the tasks together and manage the order in which they execute, based on what happens in each task or based on rules defined by the package developer. The package is brought together into a. DTSX file is actually an XML-structured file with collections of properties.

Just like other .NET projects, the file-based code is marked up using the development environment and can then be saved and deployed to a SQL Server.

Don’t worry; you won’t have to know how to write this type of XML to create a package. That’s what the designer is for. The point here is that the SSIS package is an XML-structured file, much like.PDF files are to Reporting Services. Of course, there is much more to packages than that, and you’ll explore the other elements of packages, such as event handlers, later in this SSIS Online training. 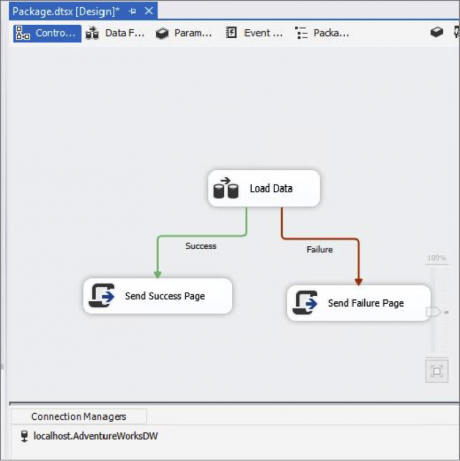 A task can best be described as an individual unit of work. Tasks provide the functionality to your package, in much the same way that a method does in a programming language. However, in SSIS, you aren’t coding the methods; rather, you are dragging and dropping them onto a design surface and configuring them.

Also included are a whole set of DBA-oriented tasks that enable you to create packages that can be used to maintain your SQL Server environment. These tasks perform functions such as transferring your SQL Server databases, backing up your database, or shrinking the database. Each of the available tasks is described in SSIS training in much more detail, and you will see them in other examples throughout the SSIS training.

Tasks are extensible, and you can create your own custom tasks in .NET if you need a workflow item that doesn’t exist or if you have a common scripting function that can benefit from reuse in your package development.

A constraint controls the execution of the two linked tasks by executing the destination task based upon the final state of the prior task and business rules that are defined using special expressions. The expression language embedded in SSIS essentially replaces the need to control workflow using script-based methodologies that enable and disable tasks, as was used in the DTS legacy solution.

Containers are core units in the SSIS architecture for grouping tasks together logically into units of work. Besides providing visual consistency, containers enable you to define variables and event handlers (these are discussed in a moment) within the scope of the container, instead of the package. There are four types of containers in SSIS:

Task Host Container: Not a visible element that you’ll find in the Toolbox, but rather an abstract concept like an interface.

Sequence Container: This allows you to group tasks into logical subject areas. Within the development environment, you can then collapse or expand this container for usability.

For Loop Container: Loops through a series of tasks until a condition is met.

For each Loop Container: Loops through a series of files or records in a data set, and then executes the tasks in the container for each record in the collection. As you read through the SSIS online course, you’ll see many real-world examples that demonstrate how to use each of these container types for typical ETL development tasks.

The core strength of SSIS is its capability to extract data into the server’s memory, transform it, and write it out to an alternative destination. If the Control Flow is the brains of SSIS, then the Data Flow would be its heart. The in-memory architecture is what helps SSIS scale and what makes SSIS run faster than staging data and running stored procedures.