SQL Server Integration Services (SSIS) is the anchor in a growing suite of products that make up the Microsoft SQL Server Business Intelligence (BI) platform. What makes SSIS so important is without the data movement and cleansing features that SSIS brings to the table, the other SQL Server BI products can’t operate. What’s the point of a cube, for example, with bad or inconsistent data? In its simplest form, SSIS is an enterprise-level, in-memory ETL tool. However, SSIS is not just a fancy wrapper around an import wizard.

In a drag-and-drop development environment, ETL developers can snap together intricate workflows and out-of-the-box data-cleansing flows that rival custom coding and expensive million-dollar, third-party tools. The best thing about SSIS is that you have already paid for it when you license SQL Server.

Learn how to use SSIS, from beginner basics to advanced techniques, with online video tutorials taught by industry experts. Enroll for Free SSIS Certification Training Demo!

When we put together the first edition of this tutorial, we were blown away by the new architecture and capabilities of SSIS. SSIS was a big change from the Data Transformation Services (DTS) product that it replaced, and there was much to learn.

Since the first edition of SSIS, we have collectively racked up many years of experience converting older DTS packages and mindsets over to using it, and trust us when we say that no one who has made the change is asking to go back. We’ve learned some things, too.

While SQL Server 2012 was a large jump forward for SSIS, SQL Server 2014 has some very small iterative changes. When we wrote this tutorial, we dug deep to mine the decades of cumulative experience working with this product, adding our collective knowledge back into these pages. We hope you will agree that the result makes your experience with SSIS a more productive one. This chapter starts from the beginning by providing an overview of SSIS, describing where it fits within the BI product platform and ETL development in general.

What is SQL Server Integration Services(SSIS):

In SQL Server 7.0, Microsoft had a small team of developers work on a very understated feature of SQL Server called Data Transformation Services (DTS). DTS was the backbone of the Import/Export Wizard, and its primary purpose was to transform data from almost any OLE DB–compliant data source to almost any destination. It also had the ability to execute programs and run scripts, making workflow a minor feature.

By the time that SQL Server 2000 was released, DTS had a strong following of DBAs and maybe a few developers. Microsoft included in the release new features like the Dynamic Properties Task that enabled you to alter the package dynamically at runtime.

Even though DTS utilized extensive logging along with simple and complex multiphase data pumps, usability studies still showed that developers had to create elaborate scripts to extend DTS to get what they wanted to be done.

A typical use case was enabling DTS to load data conditionally based on the existence of a file. To accomplish this in DTS, you had to use the ActiveX Script Task to code a solution using the file system object in VBScript.

The problem with that was DTS lacked some of the common components needed to support typical ETL processes. Although it was powerful if you knew how to write scripting code, most DBAs didn’t have this type of scripting experience (or time).

After five years, Microsoft released the much-touted SQL Server 2005 and SSIS, which was no longer an understated feature like DTS. With the SQL Server 2008 release, SSIS was given extra scalability features to help it appeal more to the enterprise. This is entirely appropriate because so much has been added to SSIS.

Microsoft made a huge investment in usability, with simple enhancements to the toolbox that allow newer users to ramp up easier. The main focus of the newest release of SQL Server is on the management and deployment of SSIS.

In SQL Server 2012 release, Microsoft had focused on SSIS manageability, making it easier to deploy and execute. Also added in 2012 are robust new data cleansing components that help you standardize and detect data anomalies.

Furthermore, improvements to the development tools will help make SSIS developers more productive and help new developers get up to speed more easily. The SQL Server 2014 release uses a newer version of Visual Studio but all in all, it will feel much like SQL Server 2012.

You will find new components in SQL Server 2014 SSIS, but they will have to be downloaded from sites like CodePlex from the product team and will eventually be rolled into the core product at a future release.

Tools of the Trade

Most of this tutorial will assume that you know nothing about previous releases of SQL Server SSIS. Instead, it takes a fresh look at SQL Server SSIS. The learning curve can be considered steep at first, but once you figure out the basics, you’ll be creating complex packages in no time. To provide an idea of how easy SSIS is to use, the following section looks at a staple tool in the ETL world: the Import and Export Wizard.

If you need to move data quickly from almost any OLE DB–compliant data source or flat file to a destination, you can use the SSIS Import and Export Wizard (shown in Figure 1-1). In fact, many SSIS packages are born this way, but most packages you wish to keep in a BI solution should not be created with the wizard. The wizard provides a quick way to move data and perform very light transformations of data but does not create packages that use best practices.

The wizard is available in all editions of SQL Server except the Local Database edition and Express. It enables you to persist the logic of the data movement into a package file. The basic concept of an import/export wizard has not changed substantially from the days of DTS. You still have the option to check all the tables you want to transfer. In addition, however, you can also encapsulate the entire transfer of data into a single transaction. 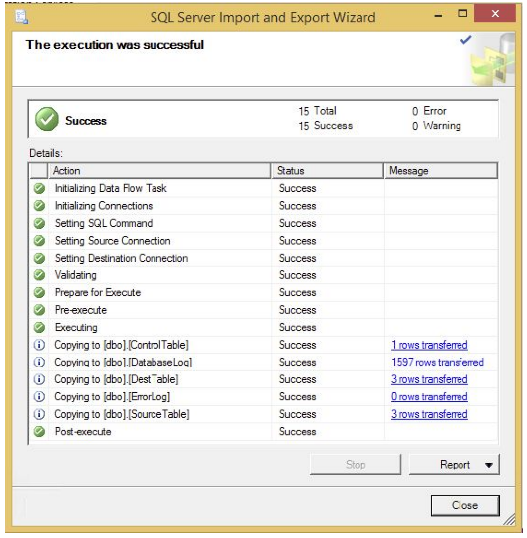 Where do you find the wizard? It depends. If you just need to perform a quick import or export, access the wizard directly from the Start menu by navigating to Start ⇒ Microsoft SQL Server “2014” ⇒ Import and Export Data. The other option is to open a project in the SSIS development environment and select Project ⇒ SSIS Import and Export Wizard. We cover this in detail in further posts. Before we get into all the mechanics for that, see above diagram for an example of the wizard that has bulk loaded tables.

The SQL Server Data Tools (SSDT) was previously called Business Intelligence Development Studio (BIDS) in SQL Server 2008, and it is the central environment in which you’ll spend most of your time as an SSIS developer. SSDT is just a specialized use of the familiar Visual Studio development environment. In SQL Server 2014, SSDT no longer installs when you install SQL Server. Instead, you’ll have to download and install the SQL Server Data Tools (Business Intelligence for Visual Studio) from the Microsoft website.

At the time of this publication, SQL Server 2014 can use the Visual Studio 2012 and 2013 versions to design SSIS packages. Visual Studio can host many different project types, from Console applications to Class Libraries and Windows applications.

Although you may see many project types when you create a project, SSDT actually contains project templates for only Analysis Services, Integration Services, Report Server, and variants thereof. SSIS, in particular, uses a BI project type called an Integration Services project (see below diagram), which provides a development design surface with a completely ETL-based set of tools in the Toolbox window. 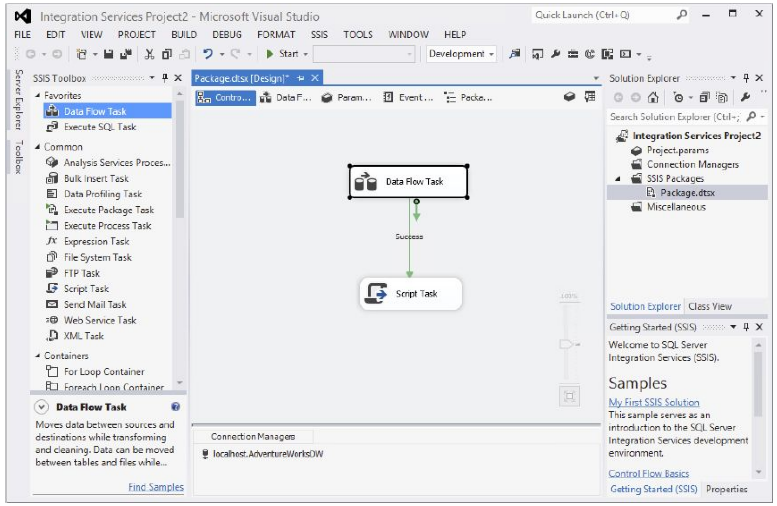 DSTX file extension. You can even develop within the SSDT environment without a connection to a SQL Server instance using the offline mode. Once your solution is complete, it can be built and deployed to one or multiple target SQL servers. These changes from DTS to SSIS are crucial to establishing the discipline and best practices of existing software development methodologies as you develop business intelligence solutions. We’ll discuss this SSDT development interface in more detail in the next posts.