Earlier in this Understanding and Tuning the Data Flow Engine Topic, you looked at the built-in pipeline logging functionality and the active time reports and how they can help you understand what SSIS is doing behind the scenes when running a package with one or more Data Flows. Another tool available to SSIS is the Windows operating system tool called Performance Monitor (PerfMon for short), which is available to local administrators in the machine’s Administrative Tools. When SSIS is installed on a machine, a set of counters is added that enables tracking of the Data Flow’s performance.

As below screenshot shows, the Pipeline counters can be used when selecting the SQLServer:SSIS Pipeline 12.0 object. 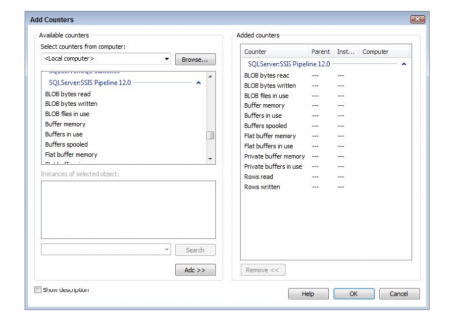 The following counters are available in the SQLServer:SSIS Pipeline object within PerfMon. Descriptions of these counters are provided next:

The BLOB counters (Binary Large Objects, such as images) help identify the volume of the BLOB data types flowing through the Data Flow. Because handling large binary columns can be a huge drain on the available memory, understanding how your Data Flow is handling BLOB data types is important. Remember that BLOB data can be introduced to the Data Flow not only by Source components but also by the Import (and Export) Column Transformations.

Because buffers are the mechanism that the Data Flow uses to process all data, the buffer-related counters provide the most valuable information for understanding how much and where memory is being used in the Data Flow. The Buffer Memory and Buffers in Use counters are high-level counters that provide totals for the server, both memory use and total buffer count. Essentially, the Buffer Memory counter shows the total memory being used by SSIS, and this can be compared with the amount of available system memory to determine whether SSIS processing is bottlenecked by the available physical memory. Furthermore, the Buffers Spooled counter provides even more indication of resource limitations on your server. It shows the number of buffers temporarily written to disk if enough system memory is not available. Anything greater than zero indicates that your Data Flow is using temporary disk storage to accomplish its work, which incurs I/O impact and overhead.

The last counters in the Pipeline counters list simply show the number of rows handled in the Data Flow, whether Rows Read or Rows Written. These numbers are aggregates of the rows processed since the counters were started.

When reviewing these counters, remember that they are an aggregate of all the SSIS packages and embedded Data Flows running on your server. If you are attempting to isolate the performance impact of specific Data Flows or packages, consider querying the catalog.dm_execution_performance_counters in the SSISDB database. 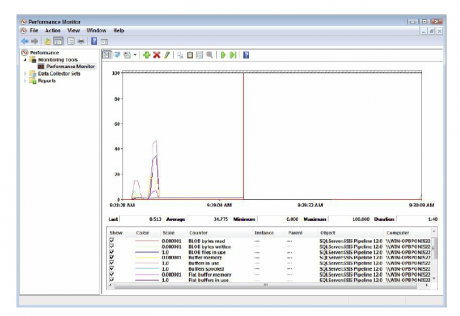 Notice that the buffer usage scales up and then drops and that the plateau lines occur during the database commit process when SSIS has completed its processes and is waiting on the database to commit the insert transaction. When the package is complete, the buffers are released and the buffer counters drop to zero, while the row count buffers remain stable, as they represent the aggregate rows processed since PerfMon was started.