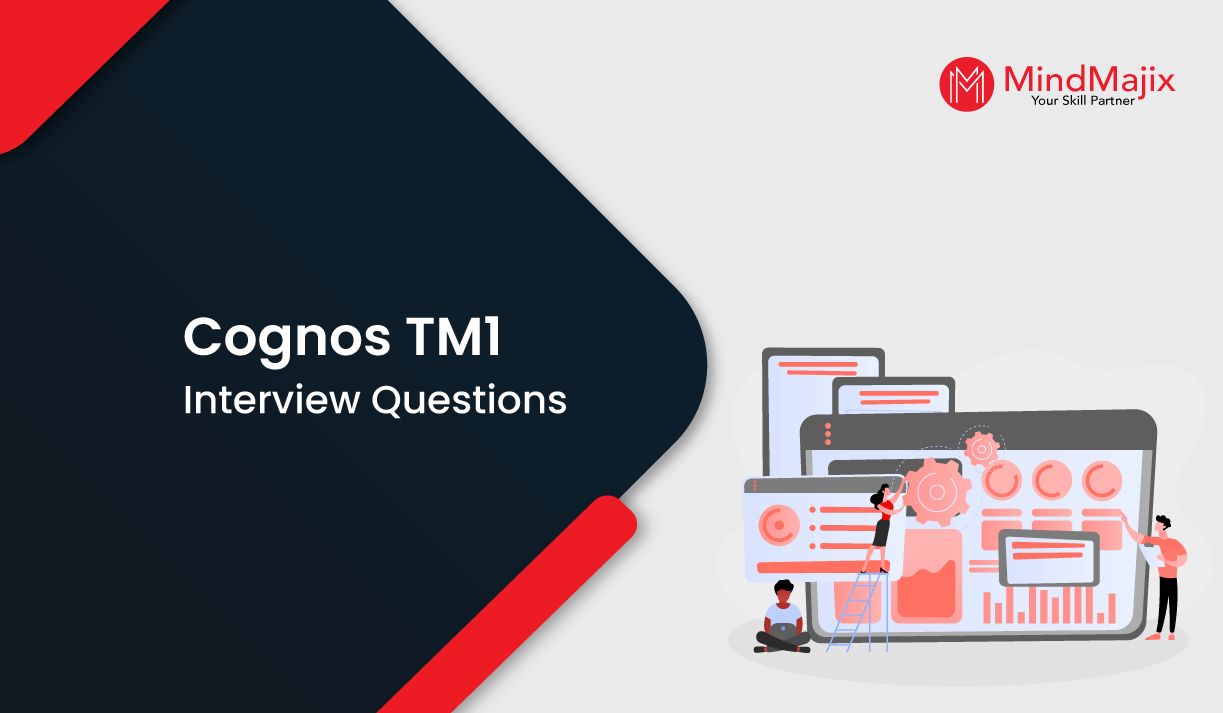 If you're looking for Cognos TM1 Interview Questions & Answers for Experienced or Freshers, you are in right place. There are a lot of opportunities from many reputed companies in the world. According to research Cognos TM1 has a market share of about 1.8%.

So, You still have the opportunity to move ahead in your career in Cognos TM1 Development. Mindmajix offers Advanced Cognos TM1 Interview Questions 2021 that helps you in cracking your interview & acquire a dream career as a Cognos TM1 Developer.

Computations on the leaf data are performed in real-time (for example, to aggregate numbers up a dimensional hierarchy). IBM Cognos TM1 includes a data orchestration environment for accessing external data and systems, as well as capabilities designed for common business planning and budgeting requirements (e.g. workflow, top-down adjustments).

If you want to enrich your career and become a professional in IBM Cognos TM1, then visit Mindmajix - a global online training platform: "IBM Cognos TM1 Training" This course will help you to achieve excellence in this domain.

Q1. Why did IBM Cognos TM1 Web change the technology from .NET to Java?

Ans: Changing IBM Cognos TM1Web to be a java based application allows the same version of the application to run on multiple platforms.  Cognos TM1 Web version 10.2 is the first version that will be able to run on a non-Microsoft Windows platform.  The initial release supports MS Windows, AIX, and Linux.  TM1 Web 10.2 has a service-oriented architecture with a number of improvements that increase performance and usability:
1. Ajax technology for the client-side rendering of formatting. Previously, the entire sheet needed to be rendered on the webserver and pushed to the client machines. The improvement here is most noticeable with Web sheets, which are generally dense in formatting. Websheets now persist locally in the browser cache.
2. Incremental updates. Instead of re-sending all values to the client machine, only changed values need to be sent to the client. This change significantly limits the amount of data required to be sent back and forth between server and client.
3. No TM1Web Server-based Excel requirement. You no longer need Microsoft Excel on the web server for publishing or exporting.
4. Better affinity between Excel and web rendering. Microsoft Excel sheets provide better fidelity when rendered on the web.

Q2. Can TM1 Web be set up for load balancing?

Ans: TM1 Web still outputs a log file. The location of this log file has changed to install_dirwebappstm1webWEB-INFlogs. If you are having problems with TM1 Web, check this log to find out more about the errors that may have been generated.

Q4. How do you use TM1 cubes in Framework Manager?

Ans: TM1 v10.1 must have the interoperability function configured to allow packages to be published from TM1.

Ans: TM1 is based on a client-server architecture and different components that interact with each other in a seamless manner to achieve the desired functionality. The following figure depicts the development process in a broad manner:
As depicted in the preceding figure, multi-dimensional cubes reside on TM1 data servers. These cubes in turn take their dimensional structure from multi-dimensional models, created by the modeler. Data is fed to these cubes from one of the backend data sources through inbuilt turbo integrator processes. Please note that these ETL processes can be modified as per the user requirements.

Q6. What are the basic features of Cognos TM1?

Q7. How do you use TM1 cubes in Framework Manager?

Ans: TM1 v10.1 has the interoperability function configured to allow packages to be published from TM1.

Q8. How many types of viewers available in TM1?

Q9. How to run Turbo Integrator Process from Command Line?

Ans: To initiate the TI process TM1RunTI is a command-line interface tool.

Ans: Series of statements that manipulate values for each record in the data source.

Ans: Series of statements that are to be executed after the data source is processed.

Q13. Name the function which is used to serialize the TI process?

Ans: A synchronized () function can is used to serialize the TI process so they can be processed sequentially.

Q14. What are the functions required to be called for enabling or disabling the bulk load of mode?

Q15. What is the limit of string length in Turbo Integrator?

Ans: The limit of string length in Turbo Integrator is 8000 single-byte characters. If the length will become more than 8000 bytes then it gets truncated.

Q16. What are the flaws of Chore Start Time?

Ans: TM1 executes chores in GMT standards. It doesn’t have any auto mechanism to accommodate Daylight Saving. Its Chores Scheduled time should be edited when DayLight time begins and ends.

Q18. Name the window by which you can create your own custom scripts?

Ans: You can create your own custom scripts using Advanced Window

Q19. How you can enable Bulk Load Mode in TI?

Q20. Name the sub-tabs which are in the advance tab of TI?

Q21. What is the meaning of Ending Bulk Load mode?

Ans: All the system and User threads will be resumed and user logins will also be allowed.

Q22. How we can generate cubes in Cognos?

Ans: Power Play Transformer contains dimension, measure, model, and cube. There are different ways to generate a cube.
Steps to be followed:
1. Just right-click on the cube name and build.
2. We can write a script in UNIX. Using that we can easily generate the cube.

Q23. Name the data sources which are available with TI?

Q24. What is Chore Commit property?

Ans: Snapshot is nothing it’s only a copy of data, whenever we create any snapshot it only copies the exact data that is related to the particular report. It is used to compare reports.
For ex: we want to compare the report for this month with the previous month.

Views:
1. It contains query whenever execute views it has read from base table materialized View
2. M views loading or replicated takes place only once which gives you better query performance.

1. It enables TM1 to run in a special optimized Single-user mode. This model has the capacity to maximize the performance for dedicated tasks during the time when there is no load on the server or at night time.
2. It doesn’t display a message to end-user to alert them. No new connections can be created.

Ans: By using Drill-through reporting you can link from one report to another. There is a number of ways to Drill Through:
Drill Through id developed with two reports
1. Parent Report
2. Child Report

Q30. What is the difference between list and crosstab?

List:
a) List report shows the data in row and column(detail information of report).
b) List can be converted to Cross tab
Crosstab:
a) Crosstab report shows the data in grids, dimensions in row and column, and measures in cells or in the intersection point.
b) Crosstab can’t be converted to a list. There is no direct option available in Report Studio to convert the cross tab to a list.

Q31. Give the options which are available after importing data using TI?

1. Create Cube and populate data
2. Create and Update dimensions
3. Re-create Cube. It destroys the existing cube definitions and overwrites it

Ans: Series of statements that update or create cubes, dimensions, and other metadata structures during the processing.

Ans: 2.0 GB. It depends on your project requirements.

Q35. What kind of system requirement is needed to run TM1 for a small installation?

Q36. How many users can open or connect to one of the TM1 web applications concurrently?

Ans: Using the distributed approach of TM1 10 they have done testing on thousands of users.

Ans: It creates a placeholder on the cells so that the cells will not be skipped during the consolidation.

Q38. What is the way of writing a FEEDER Statement when feeding one cube from another?

Q39. What are the steps to troubleshoot the FEEDERS?

1. Use Rules Tracer will be used to assist in the development and debugging of rules.
2. The functionality of Rule Tracer is available in Cube Viewer

Q40. How does Rules Tracer help us?

Q41. Define the logic behind the Sparsity in cubes?

Ans: The more dimensions a cube has, the greater will be the degree of sparsity.

Ans: Under Feeding means failing to the feed cells that contain rules-derived values. This always results in incorrect values and must be avoided at all costs.

Ans: SKIP CHECK forces TM1 to use the Sparse Consolidation algorithm in all the cases.

Q45. What is the role of a transformer?

Ans: It is used for building the Cubes (Multidimensional Structure used for OLAP processing).

Q46. Name the components of the report studio?

Q48. Name the prompt which is available in Cognos?

Ans: It is a Web portal for Cognos 8 and a component that interacts with the Content Store. It is a frontend to publish, find, manage, organize, and view an organization’s business intelligence data.

Ans: It’s a reporting tool from IBM which helps in reporting and analysis of various data from a data warehouse.

Ans: It is also called a garbage dimension. A junk dimension is a convenient grouping of typically low-cardinality flags and indicators.

Q52. Define is catalog and types of catalogs in Cognos?

Ans: The catalog is a file containing the information (Database tables) that Impromptu users need to create reports. Types of catalogs are:
1. Personal
2. Distributed
3. Shared
4. Secured

Ans: Power play transformer: It is a ‘MOLAP’ tool using which one can create a multi-dimensional structure called “CUBE”.
Power play reports: Power play for reports is used to generate reports from the cube. Only one report can be generated from one cube. If you want ‘n’ reports you must create ‘n’ cubes.

Ans: It’s a cube in which the number of populated cells as a percentage of total cells is too low.

Ans: A Query Subject is a collection of Query Items. Generally, query items have a defined relationship. It is primarily a database table upon which query action takes place.