A Brief Overview of EDI

Electronic Data Interchange (EDI) has been around since the late sixties. It was not until the mid-eighties that EDI became widely accepted. Loosely defined, EDI is the computer-to-computer transmission of business data in a standard format, which replaces a traditional paper business document. Over the years, various standards organizations have developed the standards used today. While there are many specialized standards (e.g., FORD, GM, HIPAA), the ANSI X12, USC, and UN/EDIFACT standards are the most popular. ANSI X12 and USC are popular in North America and UN/EDIFACT is used primarily in the European and Asian communities. These standards specifications were developed well before the advent of self-describing data structures (e.g., XML) and are therefore very cryptic to read and understand to the human eye.

In general, an EDI transaction can be described as a variable length, delimited flat file with a very strict structure. That said, the structure does allow for dynamic forms through the use of loops and repeating segments (see below for details on loops and segments). Additionally, the standards also describe things such as character sets, formats, and code lists which further define and describe the business document. For instance, a data element for “Unit of Measure” (UOM) may only contain values from a code list which further defines the UOM codes (e.g., EAC=each, CRT=cartone, etc.) Because of the complexity of the EDI standards, early development of EDI solutions was limited to a narrow set of developers. However, over the years, many software solutions have evolved which simplify the implementation of EDI transactions. The EDIFEC SpecBuilder product TIBCO OEM’s as part of our EDI solution is a best-of-breed example of this type of solution.

The Parts of an EDI Transaction 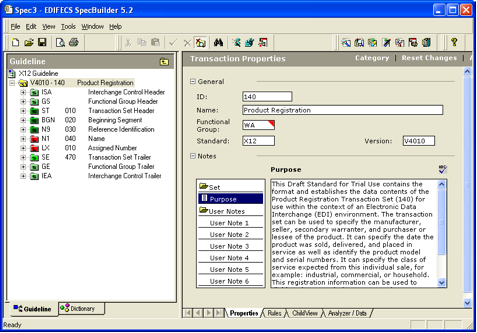 The interchange control group is comprised of the “ISA” and “IEA” segments. These segments provide a set of envelope information that describe critical information for a given business document transmission. The interchange control group guideline can be defined at a global level for a given trading partner and used across all transactions for that trading partner, or it can be defined differently for every EDI transaction.

The functional group trailer, or GE segment, indicates the number of transaction sets enclosed and matches the Group Control Number sent in the corresponding GS segment.

Multiple function groups can be sent within the same transmission.

The transaction header, or ST segment, indicates which transaction set is being sent, via the Transaction Set Identifier Code (in this case, it would be “140”) and relays a control number for the transmission.

The SE segment provides the closure for each transaction and provides a check of the integrity of the transmission. It contains a count of the segments in the transmission (including the ST and SE segments) and is the match to the control number sent in the ST segment. 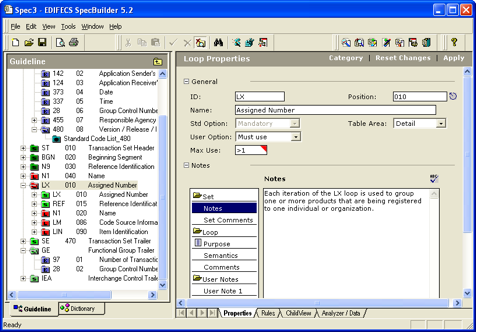 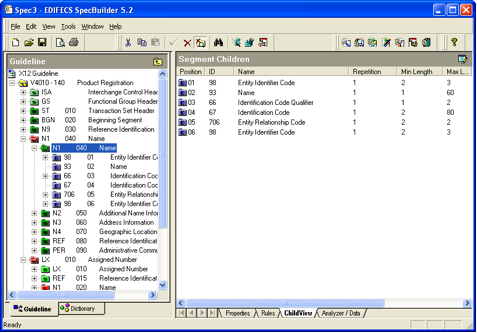 Data elements within a segment are separated by the element separator (also defined in the ISA Control segment). The last element in a segment ends with the segment terminator. 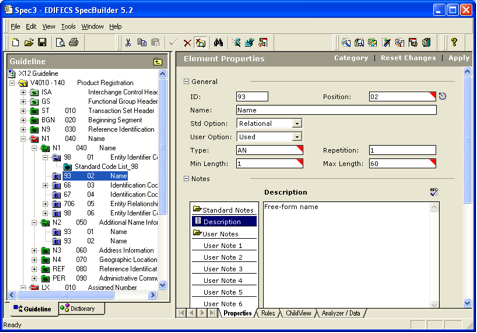 The data element is the smallest unit of defined information within an EDI guideline. All data elements used in ANSI X12 Transactions Sets are listed in the X12 Data Element Dictionary. Information for each data element includes:
Explore Tibco Spotfire Sample Resumes! Download & Edit, Get Noticed by Top Employers!Download Now!
Join our newsletter